» Hear the 'All Things Considered' essay 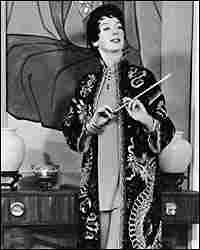 Auntie Mame was one of the first characters you nominated when we launched In Character early this year.

We heard you -- though I imagine, judging from the warmth of the memory-piece he turned in, that Bob Mondello didn't need much encouragement.

And you can listen to Bob's radio piece -- and see clips from the film -- on the story page.

My mother deemed one movie important enough for repeated family viewing: Auntie Mame, based on the novel by Patrick Dennis and starring the unforgettable Rosalind Russell.

Mame Dennis challenges her young charge Patrick to "Live! Live! Live!," presenting a world which is filled with miracles and not obstacles, hope instead of despair. Amid the chaos she creates, she ensures that he lives in a world filled with warmth, vivacity, charm, culture, adventure and beauty.

Sitting in that living room watching the movie, I could see the world my mother tried to offer me through Mame's - one where wit trumps power, charm overcomes fear, and generosity is the greatest act of human courage. Auntie Mame taught me the simple virtue of human love: the bravest person has the most to give, the most fearful has the least of all.

In short: Auntie Mame taught me to be a man.