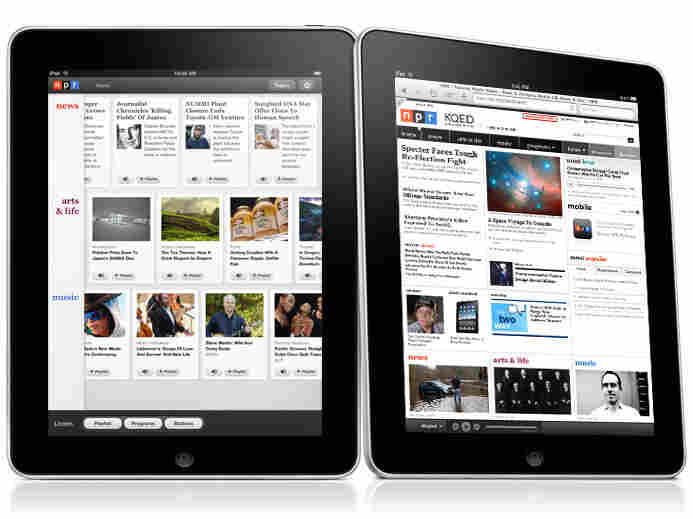 If you happen to be among the hard-core enthusiasts who plan to purchase Apple's new iPad — as much as 5 percent of the NPR audience — we'll be there for you Day 1 with a fully redesigned app and a Web site that's optimized for the platform.

We're excited about this latest innovation because we think it brings us closer to capturing NPR's unique identity on a digital platform. The iPad's casual touch-screen navigation seems more conducive to immersive reading than even the lightest laptops. And it opens up new opportunities for casual listening.

Although the initial audience will be relatively small, we expect to learn a lot from the early adopters that can be applied to this and other touch-screen devices as they become more commonplace.

Above all, we want to make sure we're available wherever our audience is consuming news, music or entertainment.

While the iPad app bears some similarity to NPR's very popular iPhone app, the interface (above) has been redesigned to take advantage of the larger screen real-estate. Like the iPhone, it also prominently features links to NPR programs and over 1,000 member-station streams, allowing you to browse news stories and listen to programs at the same time. (You can read more about the NPR iPad experience here.)

In addition to the app, we also modified the NPR Web site to make it easier to use on the iPad. We did that partly to work around some of the technical requirements of the platform (it doesn't support Flash, for example, which is used to stream audio on the Web site). But just as important, we wanted to make sure that those who find us through search engines or social media links get a robust NPR experience.

We also positioned the audio player so that it appears at the bottom of the screen wherever you are on the site so we could give greater visibility to our signature sound, for which we think the device is ideally suited.

On the iPad, you can find the app in the News section of the iTunes store (or search for NPR); and in the browser, simply go to http://npr.org to see the new site.

If you're not one of the early adopters but want to get a look at the reconfigured Web site, you can see it at iPad.npr.org. (You'll need Google's Chrome browser to view it properly on a desktop or laptop, as it hasn't been optimized for other browsers).

We look forward to your feedback on how we can continue to improve the app and the site.