NPR and 12 member stations publicly launched the new “Argo Network” of blogs this week. We’ve received some wonderful write-ups from respected bloggers and sites like Staci Kramer at Paid Content and Ken Doctor writing for Nieman Lab.  But we also thought it might be nice to also hear directly from us at NPR about why we feel it is the right time to launch this network and where we hope to go with it. 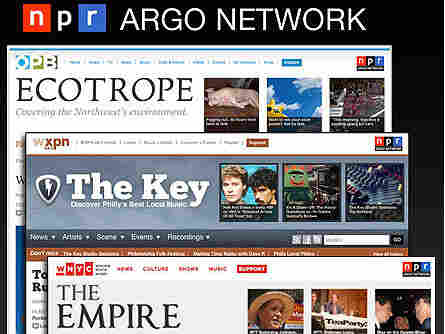 First, what is the Argo Network? It’s a collaboration between NPR and 12 of the largest member stations to strengthen the role public media play in local journalism. It comes at a particularly critical time for the news industry, as it experiences seismic shifts with newspaper downsizing and new start-ups like TBD.com in Washington, The Bay Citizen in San Francisco, The Texas Tribune and AOL’s hyperlocal “Patch” sites looking to build a new model for local journalism.

The NPR Argo Network takes a bit of a different approach, blending local journalism with very specialized topics. Unlike some of the other startups, these websites are not meant to cover an entire geographical area. Each site covers a focused niche topic, chosen because it is vitally important locally, but also resonates on a national stage.

For example, WBUR in Boston produces CommonHealth, a blog that examines health care reform – a critical issue regionally and across the country, since Massachusetts is the leading edge in many ways in efforts to change the system.

The San Francisco area is synonymous with technology. In its MindShift blog, KQED reports on the future of learning and the intersection between technology and education.

Argo sites aim to be an authoritative source for local online news. Each blog is reported and curated by a seasoned journalist, ensuring quality coverage you expect from your local public radio stations and NPR. We’ve also built tools allowing bloggers to bring in the best headlines from across the Web related to their topics.

We are very much hoping to enter into lively but civil conversation with you about some of the most contentious issues of our time. DCentric covers the collision between races and class in Washington. KALW's The Informant puts the magnifying glass to cops, crime and the courts in Oakland and San Francisco, an area where tensions between the police and the community have bubbled up above the surface in a few high-profile incidents.

The sites will live and breathe when you play an active role. Project Argo sites will be at their best when you are engaged, adding your own insights on topics, uploading photos that illustrate the fusion of cultures at Southern California Public Radio’s Multi-American, or your favorite local bands in Philadelphia at The Key.

By pulling the sites together into a network, we hope you’ll find the same serendipity of stories from one site to another – from climate change at WGBH’s Climatide to WNYC’s The Empire covering politics in New York – that keeps you interested and listening from story to story on NPR shows like Morning Edition and All Things Considered.

A full list of Argo sites is below. Take them for a spin. We hope you’ll like what you see and want to make it a regular habit. I’d also love to hear any thoughts you might have in the comments below or by e-mailing me directly.

Minnesota Public Radio
On Campus: Everything higher education in Minnesota.

New York/WNYC
The Empire: Everything you need to know about New York state politics and governance.

San Francisco/KALW
The Informant: Cops, courts and communities in the Bay Area.

San Francisco/KQED
MindShift: How we will learn.

Seattle/KPLU
Humanosphere: Charting global health and the fight against poverty.

Washington, D.C./WAMU
DCentric: Race and Class in the District.