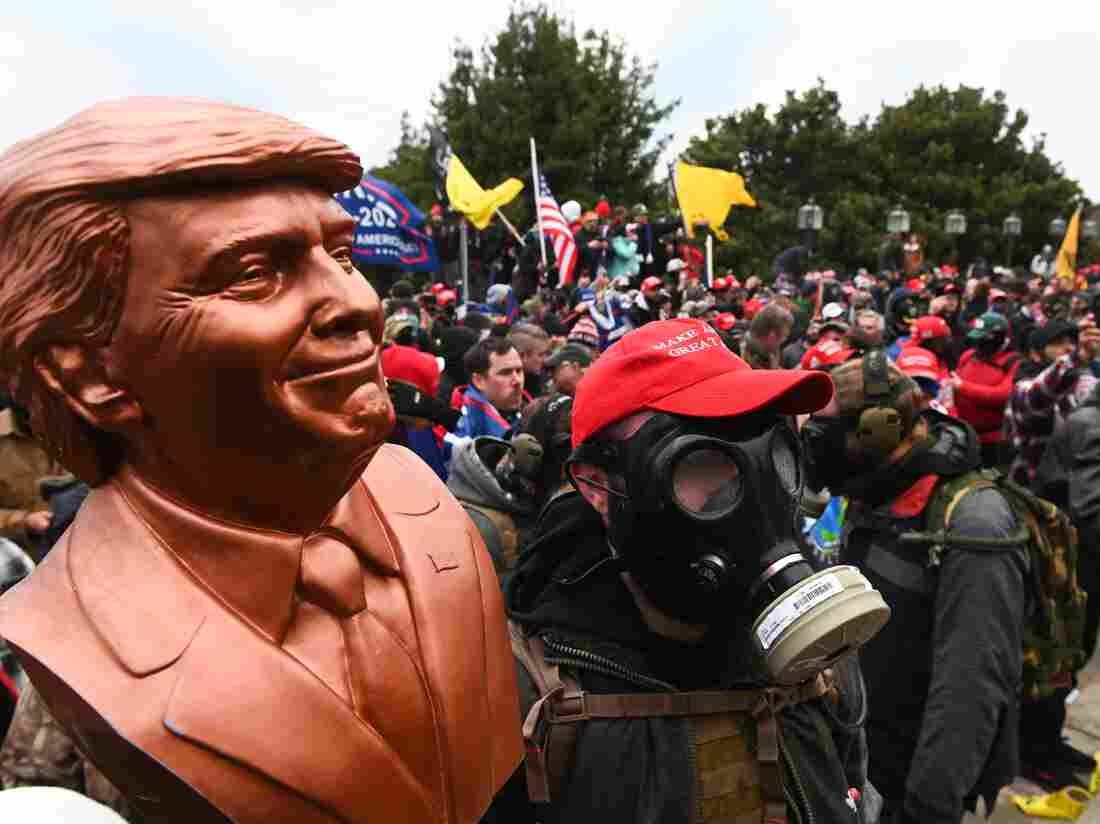 Alleged members of several different right-wing and extremist groups are facing charges in connection with the Jan. 6 siege at the U.S. Capitol. Roberto Schmidt/AFP via Getty Images hide caption 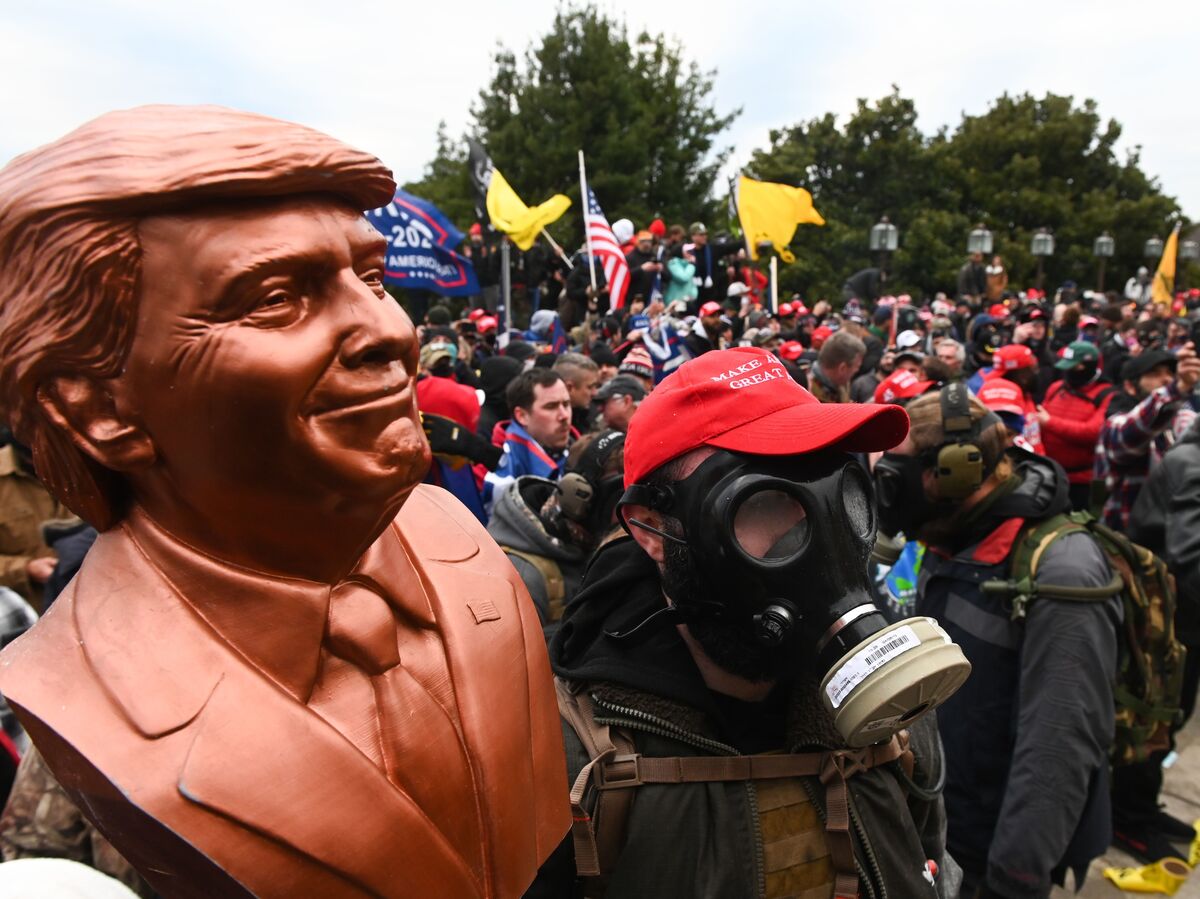 Alleged members of several different right-wing and extremist groups are facing charges in connection with the Jan. 6 siege at the U.S. Capitol.

Federal investigators say they have arrested several alleged members of extremist and white supremacist groups who participated in the Jan. 6 riot at the U.S. Capitol building, including multiple participants in an alleged conspiracy.

People allegedly affiliated with organizations such as The Three Percenters, The Oath Keepers, Proud Boys, Texas Freedom Force, and other self-described Nazis and white supremacists were among the mob that stormed the U.S. Capitol building, according to federal investigators.

Details of their arrests highlight how various extremist groups, with members throughout the country, coalesced to support Trump and his (disproven) claims that the November election was stolen. Law enforcement officials were able to track suspects down by using information gleaned from tipsters, social media posts shared by the accused, and news media coverage.

Several people associated with the Oath Keepers are also facing charges related to the Capitol riot.

The FBI describes the Oath Keepers as a "large but loose organized collection of militia who believe that the federal government has been coopted by a shadowy conspiracy that is trying to strip American citizens of their rights."

Federal prosecutors are accusing Thomas Edward Caldwell, an apparent leader of the group, of helping to plan and coordinate the Jan. 6 storming of the U.S. Capitol.

Caldwell, a 65-year-old resident of Clarke County, Va., was arrested on Tuesday on four charges including conspiracy to commit offense against the United States, according to the Justice Department.

Citing Facebook messages, an FBI affidavit supporting the criminal complaint alleges that Caldwell was "involved in planning and coordinating" the breach of the Capitol building.

On Jan. 1, for example, federal investigators said Caldwell sent a message helping arrange hotel accommodations for Jan. 5-7. That same day, another alleged member of the group sent Caldwell a message in which he called him "Commander" and said "Guess I'll be seeing you soon. Will probably call you tomorrow...mainly because...I like to know wtf plan is."

On the evening of Jan. 6, Caldwell allegedly sent a flurry of Facebook messages about the day's riot, including a video that appears to have been taken inside the Capitol building. "I am such an instigator!" he allegedly wrote at one point.

"We need to do this at the local level," he wrote in another message, according to the investigators. "Lets [sic] storm the capitol in Ohio. Tell me when!"

According to the FBI, the Oath Keepers focuses on recruiting current and former military, law enforcement and first responders. The organization's name alludes to the oath sworn by members of the military and police to defend the Constitution "from all enemies, foreign and domestic."

It also describes video footage showing "8 to 10 individuals in paramilitary equipment aggressively approaching an entrance to the Capitol building." Prosecutors describe those individuals as moving "in an organized and practiced fashion," and based on their movements and clothing, believe them to be members of the Oath Keepers.

The FBI's affidavit identifies two other group members by name as having participated in the riot, Jessica Watkins and Donovan Crowl.

Watkins and Crowl, both of Champaign County, Ohio, were arrested Jan. 18.

Investigators say they are members of a group called the Ohio State Regular Militia, a local militia organization which pays dues to the Oath Keepers.

According to investigators, Watkins is a self-described commanding officer of the Ohio State Regular Militia. She shared videos online showing her and Crowl, at the Capitol, writing, "Yeah. We stormed the Capitol today. Teargassed, the whole, 9. Pushed our way into the Rotunda. Made it into the Senate even. The news is lying (even Fox) about the Historical Events we created today."

Another man allegedly linked to the Oath Keepers, but not explicitly named as part of the conspiracy, has also been arrested.

Jon Ryan Schaffer, of Columbus, Ind., a heavy metal musician and founder of the band Iced Earth, turned himself in to FBI agents in Indianapolis on Jan. 17.

An FBI affidavit says Schaffer has "long held far-right extremist views." He allegedly sprayed Capitol Police officers with bear spray as rioters pushed their way into the building. He is captured in videos and photos wearing a blue hooded sweatshirt under a tactical vest with a baseball cap that reads "Oath Keepers Lifetime Member."

Investigators say that when Schaffer took part in the Million MAGA March in Washington, D.C., in November, he told a reporter, "We're not going to merge into some globalist, communist system, it will not happen. There will be a lot of bloodshed if it comes down to that, trust me."

Guy Wesley Reffitt, of Wylie, Texas, was arrested Jan. 18 in his home state. He is facing charges of trespassing on restricted areas of the Capitol grounds and obstruction of justice.

Reffitt's wife told police that he is a member of the Texas Freedom Force, an extremist militia group, according to court documents.

The Texas Freedom Force, however, says on Twitter that the FBI has it wrong and that the group "is not a extremist militia (we are a nonprofit) & are far from extremist, the FBI didn't do their homework."

Reffitt's wife shared with authorities that he also belongs to the Three Percenters. The FBI says the group is born of the myth that only three percent of American colonists took up arms against the British during the American Revolution. Members of the group believe that a small force of well-armed and prepared members with a just cause can overthrow a tyrannical government.

Court documents say Reffitt threatened his son and daughter following his return home from the Jan. 6 siege at the Capitol. Reffitt's son said he saw his father bring home an AR-15 rifle and a Smith & Wesson pistol when he returned. Those firearms, among others, were retrieved by police when they searched his home.

Reffitt told his adult son that if he "crossed the line" and reported him to the police, Reffitt would have no option but to "do what he had to do," according to the affidavit. Reffitt's children told their mother what their father said to them. She confronted Reffitt and he said, "he was trying to protect the family, and if someone was a traitor then that's what's going to happen."

Robert Gieswein, from Woodland Park, Colo., is also believed to be a member of the Three Percenters, according to the FBI. He is facing charges in connection with an assault on a Capitol Police officer with pepper spray, a barricade surrounding the Capitol grounds, and a baseball bat. According to court documents, Gieswein posted a photo of himself on social media flashing the Three Percenters' sign and wearing clothing with the organization's logo.

The FBI says Gieswein also runs a private paramilitary group called the Woodland Wild Dogs, the patch of which he was seen wearing on the front of his tactical military vest in footage from the Capitol. In photos and videos, Gieswein is also seen wearing a helmet, goggles, and a black camouflage backpack.

Gieswein told reporters that "corrupt" politicians, of which he includes President-elect Joe Biden and Vice President-elect Kamala Harris, have sold the country out to the "Rothschilds and Rockefellers." The idea is a common conspiracy theory among far-right extremists who believe that a shadow force, including the famous European banking family and the American industrial and political dynasty, controls global currency.

Bryan Betancur, a self-professed white supremacist who has told law enforcement officers that he is a member of several white supremacist organizations, was caught on video during the riots. He was arrested Jan. 17.

Betancur, who was on probation when he went to the Capitol, has voiced "homicidal ideations, made comments about conducting a school shooting, and has researched mass shootings," according to court documents.

He is also engaged online in racist, violent extremist groups and has voiced support for James Fields, the neo-Nazi convicted of killing Heather Heyer during the 2017 Charlottesville, Va., "Unite the Right" rally, the FBI said. Betancur, who was arrested in Maryland on Jan. 17, is seen in videos of the Capitol attack flashing hand signals associated with white supremacy and wearing a Proud Boys t-shirt. The Proud Boys is a white nationalist organization with multiple U.S. chapters.

Betancur, of Silver Spring, Md., also goes by the online aliases Bryan Clooney and Maximo Clooney, according to court documents.

Dominic Pezzola, a former Marine and Proud Boys member known as "Spaz" or "Spazzo" was arrested Jan. 15 in New York. Pezzola, who is from Rochester, N.Y., is seen in photos and videos of the Capitol riot wearing a black short-sleeved t-shirt with yellow, consistent with the "Proud Boys" logo, the FBI said.

A witness said Pezzola and others involved in the riots acknowledged that they would have "killed Vice President Mike Pence if given the chance."

Pence was at the Capitol in hiding during the attack.

Another individual charged is Timothy Hale-Cusanelli, a member of the U.S. Army Reserve, who as a defense contractor at Naval Weapons Station Earle in New Jersey has a security clearance and access to a variety of munitions, according to court documents.

A police affidavit says Hale-Cusanelli, of Colts Neck, N.J., is "an avowed white supremacist and Nazi sympathizer" who posts videos on YouTube under the title the "Based Hermes Show," showcasing extreme political viewpoints.

A tipster told the FBI that Hale-Cusanelli had shared cell phone videos with the informant showing him at the Capitol building harassing police officers. Hale-Cusanelli also admitted to entering the Capitol and encouraging other members of the mob to "advance" – giving directions by voice and hand signals.

He was arrested Jan. 17 in New Jersey.