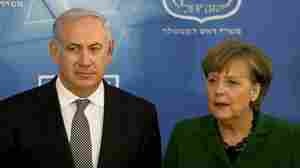 Israeli Prime Minister Benjamin Netanyahu and German Chancellor Angela Merkel held a joint press conference in Netanyahu's office on Jan. 31 in Jerusalem, Israel. Merkel called for a stop to the settlement building, sighting the events in Egypt as a highlight for the importance of furthering the diplomatic process. Uriel Sinai/Getty hide caption

World Hopes For Both Stability And Reform In Egypt

January 31, 2011 • Democratic leaders around the world have expressed support for Egyptian demands for greater openness and freedom. Fear of instability, however, has kept them from calling for President Mubarak to step down.

Egyptian Upheaval Has Implications For Israel

January 31, 2011 • The uprising in Egypt has potentially profound implications for Israel. Egypt is a moderating force in the Arab world. It was the first to sign a peace treaty with Israel and has been active in promoting Israeli talks with the Palestinians.

Egyptian Upheaval Has Implications For Israel

How Concerned Should U.S. Be With Unrest In Egypt?

January 31, 2011 • Calls for Egyptian President Hosni Mubarak to step down have increased. The Egyptian army is patrolling the streets, and American tourists are being evacuated. Those watching the events in Egypt are trying to understand what the the unrest might mean for political stability in the region.

How Concerned Should U.S. Be With Unrest In Egypt?

January 31, 2011 • Unlike in many demonstrations in the Middle East, protesters in Egypt are not denouncing the U.S. American officials have not fully embraced the protests. But Time magazine editor-at-large Romesh Ratnesar says the Obama administration should not fear the instability democracy may bring to Egypt.

January 31, 2011 • Demonstrations continue to gain momentum in Egypt, as the organizers there call for a million people to hit the streets Tuesday. The protesters hope the mass demonstrations will increase pressure for Egyptian President Hosni Mubarak to resign and leave the country. Host Michel Martin speaks with Professor Fawaz Gerges of the London School of Economics about the aspirations of the Egyptian protesters and if Mubarak steps down, what is next for the African nation that is a vital ally to the United States.

January 31, 2011 • Some say that the United States is slow to react to the uprisings sprouting up in the Middle East and North Africa. Joel Dreyfuss of The Root argues that the African American community in particular is strangely mute, and wonders if this silence marks a changing tide.

January 30, 2011 • Egypt is one of two Arab countries that have diplomatic relations with Israel, which is watching the developments closely. Aluf Benn, the editor at large for Ha'aretz newspaper, says Israel's worst fear is that Egypt will form an Islamic government. 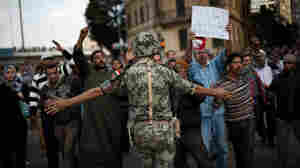 An Egyptian army soldier tries to stop anti-government protesters as they walk toward Tahrir Square in Cairo on Sunday. Emilio Morenatti/AP hide caption

Uncertainty In Egypt's Streets Amid Protests

January 30, 2011 • Nobel Peace Prize winner Mohamed ElBaradei told cheering crowds in Cairo's Tahrir Square that they were "the owners of this revolution." He also called for "the departure of the regime," but so far there are few signs that President Hosni Mubarak is leaving.

January 30, 2011 • The crisis in Egypt has a range of implications for U.S. objectives in the region. Host Liane Hansen talks with Martin Indyk, the vice president and director of foreign policy at Brookings who previously served as U.S. ambassador to Israel.

January 28, 2011 • Earlier this week, TV station Al-Jazeera published more than 1,600 secret documents that detail 11 years of Arab-Israeli peace talks. What do the released papers reveal about U.S.-Palestinian relations under the Obama administration?

Foreign Policy: We Can't Doubt Change In The Arab World

January 27, 2011 • In light of what seems to be spreading protests throughout the Arab world in countries such as Tunisia and Egypt, Mark Lynch of Foreign Policy analyzes the demonstrations. He argues that, although it is too soon for a definite outcome, the situations in protesting Muslim countries should not be underestimated.

January 27, 2011 • The country remains sharply divided over the impending announcement of indictments in the 2005 assassination of former Prime Minister Rafiq Hariri.

January 25, 2011 • There were angry and at times violent protests across Lebanon on Tuesday, after a politician backed by Hezbollah was named prime minister. Najib Mikati is a Sunni and a billionaire, who pledged Tuesday that "his hand is extended to all Lebanese, Muslims and Christians." For more, host Melissa Block speaks to Rami Khouri, director of the Fares Institute of Public Policy and International Affairs at the American University of Beirut, and a syndicated columnist at the Daily Star in Lebanon.

January 25, 2011 • Documents leaked by Al-Jazeera appear to show that Palestinian leaders were willing to make broad concessions in negotiations with Israel. The papers have created a furor in the Middle East, but some say they reveal little new information.

January 25, 2011 • Palestinian Authority officials have challenged the accuracy of the leaked documents. Their rivals are accusing PA leaders of treason.