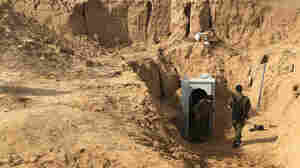 The Israeli military is working on a 40-mile wall that will run the length of the nation's border with the Gaza Strip to counter tunnels dug by Palestinian militants. Daniel Estrin/NPR hide caption

January 24, 2018 • The Israeli military says the 40-mile barrier will run along the country's border with the Gaza Strip in an effort to thwart attacks by Palestinian militants. 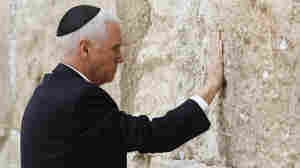 January 23, 2018 • The hashtag #PenceFence made the rounds on Twitter as female journalists said they were made to stand behind their male colleagues at the vice president's visit to the holy site in Jerusalem.

January 19, 2018 • Palestinians still have aspirations for a capital in part Jerusalem. National political institutions could strengthen Palestinian claims in the city, but for decades Israel has worked to limit those. 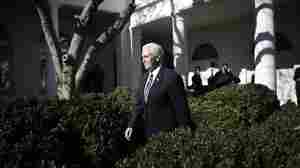 January 19, 2018 • The vice president's three-nation trip was supposed to happen in December. Pence wants to focus on security matters and the persecution of Christians, but he will also have to soothe allies. 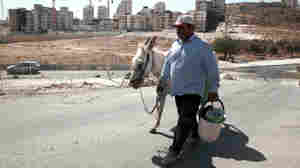 A Palestinian man walks near a construction site of a new housing unit in a neighborhood in East Jerusalem known to Jewish settlers as Har Homa and to Palestinians as Jabal Abu Ghneim. The Palestinians want East Jerusalem to be the capital of a future state and object to Israeli building there and throughout the West Bank. Israel claims all of Jerusalem as its capital. Mahmoud Illean/AP hide caption

January 6, 2018 • Human Rights Watch says Israel has revoked the residency papers of at least 14,595 Palestinians in East Jerusalem since Israel captured the territory from Jordan in 1967.

December 25, 2017 • Christian Palestinians in the West Bank city face a time of uncertainty and bitterness over President Trump's decision to recognize Jerusalem as the capital of Israel.

December 13, 2017 • President Trump may have handed Israel a symbolic victory with his recognition of Jerusalem as the Israeli capital, but every day in East Jerusalem, Palestinians face pressures to assimilate. With hope for a two-state solution dwindling, more families are applying for Israeli passports, and more Palestinian children are attending schools that teach the official Israeli curriculum.

Netanyahu Says Palestinians Need To 'Come To Grips With This Reality'

Netanyahu Says Palestinians Need To 'Come To Grips With This Reality'

December 9, 2017 • We have the latest from Jerusalem following the U.S. decision to recognize the city as Israel's capital.

More Violence In Jerusalem After U.S. Recognizes City As Capital

December 8, 2017 • Demonstrations and clashes broke out around the West Bank and Gaza two days President Trump's announced Wednesday that the U.S. recognizes Jerusalem as the capital of Israel.

More Violence In Jerusalem After U.S. Recognizes City As Capital

Protests In West Bank And Gaza Over Trump's Jerusalem Decision

December 8, 2017 • As the weekend begins in Jerusalem, the region is bracing for protests in reaction to President Trump's change in U.S. policy.

Protests In West Bank And Gaza Over Trump's Jerusalem Decision

December 7, 2017 • They say he's taken Israel's side. Hamas is calling for a new uprising after the U.S. recognized Jerusalem as Israel's capital.