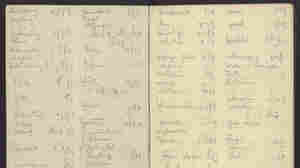 Franz Kafka, who died in 1924, studied Hebrew in Germany during the last two years of his life. This is one of eight notebooks of his Hebrew studies that are part of the Israeli National Library's collection. Israel and an elderly Israeli woman are wrangling over Kafka documents that may include unpublished manuscripts. Natan Dvir/Polaris hide caption

May 30, 2012 • A self-described cat lady and the state of Israel are locked in a battle over what may be unpublished manuscripts by Franz Kafka. In a story that is, well, Kafkaesque, the papers are in a small Tel Aviv apartment, in the possession of an elderly woman who has refused to let experts see them.

Racial Tensions Boil Over In Israel

May 30, 2012 • Israeli demonstrators turned violent last week when calling for the deportation of African immigrants. Host Michel Martin speaks with Ilan Lior, a reporter with Israel's Haaretz newspaper. They discuss the Tel Aviv protest and why tensions are boiling over between some Israelis and African immigrants.

Racial Tensions Boil Over In Israel

From An Israeli Kibbutz, A High-Priced Caviar Prized By Top Chefs

May 30, 2012 • One of the world's most treasured foods comes from an unlikely source — a sturgeon farm on a kibbutz in northern Israel. The prized sturgeon eggs — or osetra caviar, if you must — fetches a hefty price and has a top-chef following.

From An Israeli Kibbutz, A High-Priced Caviar Prized By Top Chefs

May 28, 2012 • The mystery surrounding the fate of the Swedish diplomat who saved thousands of Jews in Budapest has lingered for more than six decades. A Russian security archivist says his agency is not hiding details on what happened to Wallenberg who disappeared after being arrested by the Soviet Red Army.

May 24, 2012 • A demonstration held Wednesday night in Tel Aviv in favor of deporting Africans in Israel turned into a frenzied mob. Twelve people were arrested for committing acts of violence and vandalism against Africans. Israel has tens of thousands of African nationals from Darfur and Eritrea. Over the last month, reports have filled the Israeli papers of suspicions that the Africans are responsible for a string of violent crimes, and rapes, though actual evidence only incriminates them in a handful of circumstances.

May 24, 2012 • As the candidates try to distinguish themselves from each other, there is one area in which Aaron David Miller of Foreign Policy sees no difference at all. It's foreign policy, and he says that since Sept. 11 the parties have come to a consensus on how America will interact with the rest of the globe.

May 23, 2012 • One of the top candidates in the Egyptian elections is Amr Moussa, a former official in the Mubarak government. David Kenner of Foreign Policy explains his unlikely ascendancy, arguing that Egyptians are seeking candidates who represent law and order, rather than those embody last year's revolution.

The Definition Of Success For Talks With Iran

May 22, 2012 • Negotiators from Iran return to talks Wednesday that President Obama calls a last chance for diplomacy in the standoff over Tehran's nuclear ambitions. Representatives from the five permanent members of the U.N. Security Council and Germany, will meet with Iranian negotiators in Baghdad.

The Definition Of Success For Talks With Iran 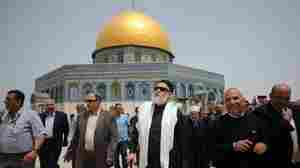 Egypt's grand mufti, Ali Gomaa (center, with scarf), visits the Al-Aqsa mosque in Jerusalem in April. The Dome of the Rock, which is part of the same compound, is shown behind him. Many Muslims have boycotted the site because Israel claims sovereignty. But Palestinian religious figures now say they welcome such visits, a move that has sparked controversy. AFP/Getty Images hide caption

May 18, 2012 • For decades, the Palestinians have urged foreign Muslims to boycott one of the holiest sites in Islam, the Al-Aqsa mosque in Jerusalem. But now, Palestinian religious figures are encouraging such visits, saying they could highlight Palestinian claims in their feud with Israel.

Diplomat: U.S. Has Military Option Ready, If Needed, To Deal With Iran

May 17, 2012 • President Obama has said "all options are on the table." The U.S. ambassador to Israel said this week that military options are ready, if necessary, but that diplomacy is still the preferred solution. 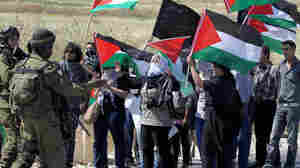 Israeli soldiers stand in front of Palestinian and foreign activists during a demonstration on the 64th anniversary of the creation of the state of Israel, at the Hawara checkpoint outside Nablus, West Bank, on Tuesday. APAimages/Rex Features/AP hide caption

After Palestinian Prison Deal, A Push For Nonviolence

May 17, 2012 • Palestinian prisoners ended a mass hunger strike aimed at improving conditions in Israeli prisons after reaching a deal with Israeli authorities this week. The success has some Palestinians calling for a greater emphasis on nonviolence in their opposition to Israeli policies.

After Palestinian Prison Deal, A Push For Nonviolence 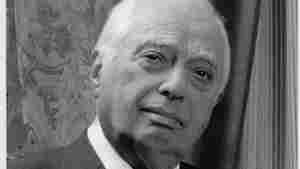 Bernard Lewis is also the author of the best-selling What Went Wrong? Alan Kolc/ hide caption

May 15, 2012 • Over his long academic career, Bernard Lewis has arguably become the world's greatest historian of the Middle East. Now, at 96, Lewis turns his attention inward in Notes on a Century, a memoir that looks back on his life, work and legacy. 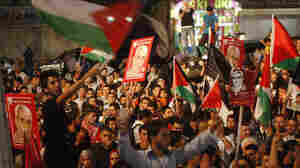 Palestinians hold pictures of prisoners and Palestinian flags as they celebrate the end of a prisoners' hunger strike in Israeli jails, in the West Bank city of Ramallah on Monday. Majdi Mohammed/AP hide caption

May 14, 2012 • The deal will reduce the Israeli practice of keeping prisoners in solitary confinement and increase family visits.

May 14, 2012 • At least 1,200 Palestinians in Israeli jails have agreed to end a mass hunger strike in a deal mediated by Egypt. Israeli officials have promised to ease prison conditions in exchange for the end to the fast.

Foreign Policy: Got A Conflict? 6 Ways To Resolve It

May 11, 2012 • The world is rife with conflict — in fact, there is a whole academic discipline devoted to resolving it on a grand scale. Aaron David Miller has six points that any negotiator can use to ensure that problems between countries can be resolved successfully.