December 30, 2014 • The proposal failed to get the necessary nine votes to pass. The Palestinian plan called for, among other things, an end to the Israeli occupation by late 2017. 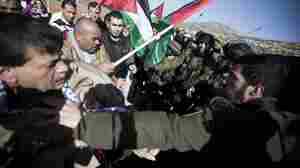 An Israeli soldier pushes Palestinian Cabinet member Ziad Abu Ain (left) during a protest in the village of Turmus Aya near the West Bank city of Ramallah, on Wednesday. Abu Ain died shortly after the protest in which witnesses said Israeli troops fired tear gas at him and dozens of Palestinians marchers. Witnesses also said Abu Ain was beaten by an Israeli soldier. Majdi Mohammed/AP hide caption

December 10, 2014 • The circumstances surrounding Ziad Abu Ein's death are unclear. Medics say he died from exposure to tear gas. Israel said it will examine his body jointly with Jordanian and Palestinian pathologists.

In Israel, A Clash Over What The Nation Is And Who It's For

December 2, 2014 • Israel's prime minister says the country needs to be officially defined as a Jewish state, but opponents say that would undermine its goal of equality for all.

In Israel, A Clash Over What The Nation Is And Who It's For 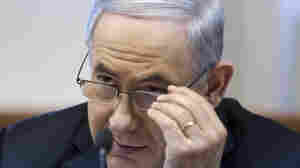 Israeli Prime Minister Benjamin Netanyahu listens during a Cabinet meeting in Jerusalem on Sunday. His Cabinet approved a draft law that defines the country as "the nation-state of the Jewish people." Jim Hollander/AP hide caption

November 24, 2014 • The bill, which must be approved by Parliament, defines Israel as "the nation-state of the Jewish people." It has angered not only Israel's Arab citizens, but also members of the coalition government. 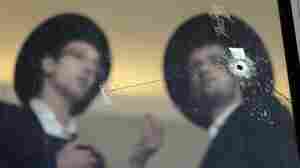 November 19, 2014 • Israeli troops also razed the home of a Palestinian suspected in an earlier attack, signaling that the government will continue with the controversial practice. 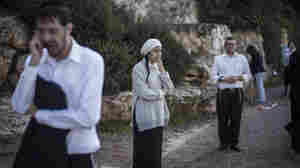 People react as they stand outside a synagogue on Tuesday in Jerusalem, Israel. Four Israelis were killed and several others wounded in a terrorist attack at the synagogue. Ilia Yefimovich/Getty Images hide caption

November 18, 2014 • A police officer injured in this morning's attack died late Tuesday. Of the others killed by the assailants, three were U.S. citizens. 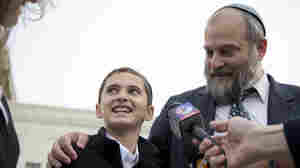 Menachem Zivotofsky and his father, Ari Zivotofsky, gather to speak to media outside the Supreme Court in Washington on Monday. The court is taking its second look at a dispute over the wording of U.S. passports for Americans born in Jerusalem, a case with potential foreign policy implications. Carolyn Kaster/AP hide caption

November 3, 2014 • Can U.S. citizens born in Jerusalem list Israel as their place of birth on their passports? A 12-year-old boy is contesting the U.S. position that no one has sovereignty over the city.

October 12, 2014 • Secretary of State John Kerry flies to Cairo to take part in an international conference on rebuilding Gaza, after Israel's latest military operation against Hamas militants there. 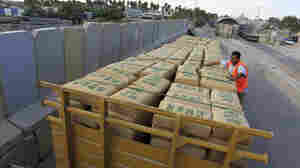 A Palestinian worker checks a truck loaded with bags of cement as it crosses into southern Gaza from Israel last year. Israel has restricted cement supplies to only specific projects. Said Khatib/AFP/Getty Images hide caption

October 10, 2014 • You're not supposed to be able to buy cement commercially in Gaza, but some is being sold illicitly. The material is crucial for replacing homes and shops destroyed in the summer war. 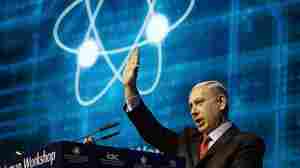 At a cybersecurity conference in Tel Aviv on Sept. 14, Israeli Prime Minister Benjamin Netanyahu accused the 43 Unit 8200 refusniks of "baseless slander" which "should be condemned." Menahem Kahana/AFP/Getty Images hide caption

September 21, 2014 • Forty-three veterans of Unit 8200, Israel's secretive surveillance organization, say they were directed to spy indiscriminately on Palestinians. Were they using intelligence gathered by the NSA?

August 26, 2014 • Israel and Hamas have agreed on a cease-fire, which raises hopes of an end to the seven-week war in Gaza that has killed more than 2,000 people.

August 26, 2014 • The 17-story shard of an apartment building, which was destroyed in an Israeli airstrike, looms over a Gaza City neighborhood. The tower is a symbol of the ongoing, dangerous uncertainties of life late in the second month of the war between Israel and Hamas. 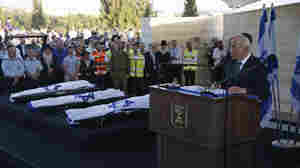 August 22, 2014 • The leader of the group says it carried out the kidnapping in the hopes of exchanging the teens for prisoners held by Israel, and didn't intend to set off the massive conflict that followed.

August 21, 2014 • An Israeli airstrike killed three Hamas military commanders, who were buried shortly later amid threats that the militant group would respond.

Blocked At The Border, Gaza Man's Hopes Of Escape Fade

August 19, 2014 • One man's quest to get out of Gaza and into Egypt highlights Palestinian calls for more freedom of movement.

Blocked At The Border, Gaza Man's Hopes Of Escape Fade