March 25, 2013 • President Obama's visit to the Middle East has both inspired cheers and raised eyebrows among policy experts. But will his visit help reshape the debate over the region's future? Host Michel Martin discusses the trip with Peter Beinart, who edits The Daily Beast's Open Zion blog, and Saeed Khan, a lecturer and Middle East expert at Wayne State University.

March 25, 2013 • Secretary of State John Kerry has been putting his diplomatic skills to the test as he deals with some of America's difficult partners. Kerry spent Sunday in Baghdad, where he's tried to nudge the Iraqi government to stop letting Iran use Iraqi airspace to send weapons into Syria.

Kerry Lands In Baghdad With Syria In Mind

March 24, 2013 • Secretary of State John Kerry touched down in Baghdad Sunday on an unannounced trip 10 years after the U.S.-led invasion toppled Saddam Hussein. On his agenda is urging Iraqi leaders to stop overflights of arms and supplies from Iran to Syria. Host Rachel Martin speaks with NPR's Michele Kelemen, who is traveling with Kerry.

Kerry Lands In Baghdad With Syria In Mind

March 23, 2013 • President Obama returns Saturday from a trip to the Middle East, which included a long-awaited stop in Jerusalem. Weekends on All Things Considered guest host Don Gonyea speaks with James Fallows, national correspondent with The Atlantic, about the speech Obama gave to students there.

March 23, 2013 • President Obama heads home from the Middle East Saturday, after a mixed reception to his four-day visit. Obama spent much of that time in Israel, trying to lay the groundwork to revive the long-stalled peace process with the Palestinians. He also traveled to the West Bank and met with Jordan's King Abdullah. NPR's Scott Horsley has a recap from Amman, Jordan.

March 22, 2013 • President Obama's Mideast trip brought him to Israel, and may mark the beginning of a thaw in tense relations between the White House and Israeli Prime Minister Netanyahu. What might that mean to prospects for peace in the region? Robert Siegel speaks with longtime Mideast diplomat Aaron David Miller of the Woodrow Wilson Center for Scholars.

March 22, 2013 • Robert Siegel talks to regular political commentators E.J. Dionne of The Washington Post and Brookings Institution, and David Brooks of The New York Times. They discuss President Obama's trip to the Middle East and the ongoing debates over immigration and gun control.

U.S. Pledges $200 Million To Jordan To Aid With Syrian Refugees

March 22, 2013 • President Obama pledged $200 million in additional U.S. aid for Jordan on Friday to help in caring for a flood of refugees from the civil war in neighboring Syria. The pledge came as Obama met with Jordan's King Abdullah II on the next-to-last day of the president's Middle East tour.

U.S. Pledges $200 Million To Jordan To Aid With Syrian Refugees 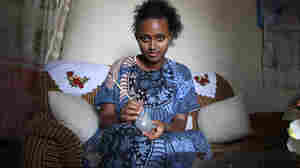 March 22, 2013 • Photographer Ilan Ossendryver admits he didn't know much about Ethiopian Jews before receiving an assignment to cover their migration to Israel. 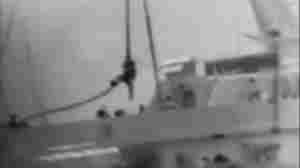 March 22, 2013 • At one point, Turkish Prime Minister Recep Tayyip Erdogan called the incident a "cause for war." Nine people died in 2010, when Israeli commandos boarded a flotilla that was trying to break an Israeli naval blockade of Gaza. 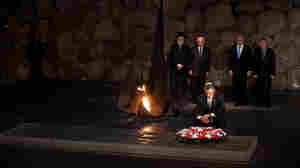 President Barack Obama pays his respects in the Hall of Remembrance in front of Israel's President Shimon Peres, Israel's Prime Minster Benjamin Netanyahu, Chairman of the Yad Vashem Directorate Avner Shalev and Rabbi Yisrael Meir Lau after marines layed a wreath on his behalf during his visit to the memorial on Friday. Uriel Sinai/Getty Images hide caption

March 22, 2013 • At the Holocaust memorial Yad Vashem, Obama said it was humanity's obligation to act against racism and anti-semitism.

March 22, 2013 • President Obama is urging both Israelis and Palestinians not to abandon long-stalled peace talks. The president has been practicing some low-key shuttle diplomacy this week.

March 21, 2013 • President Obama wrapped up talks with Palestinian leader Mahmoud Abbas on Thursday before heading back to Jerusalem's convention center to deliver a speech to Israeli university students. 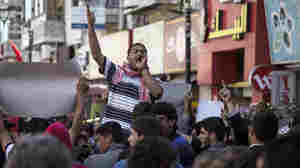 March 21, 2013 • But one of the unanswered questions was who were they protesting against? Obama, Israel or their own government. 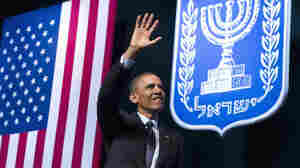 Obama's Speech In Israel: 5 Excerpts You Should Read

March 21, 2013 • Speaking to Israeli students at the Jerusalem Convention Center on Thursday, President Obama delivered a speech brimming with talk of hope and change that echoed the Obama of 2008.