Accessibility links
Who Is The Tea Party? Republicans By Another Name : It's All Politics Tea Party members call themselves independents but they're really leaderless debranded Republicans. The challenge is how do they become more than a spoiler group which elects nominees who most don't win general elections.

Jonathan Rauch talks to Linda Wertheimer about the Tea Party

Who Is The Tea Party? Republicans By Another Name

Who Is The Tea Party? Republicans By Another Name 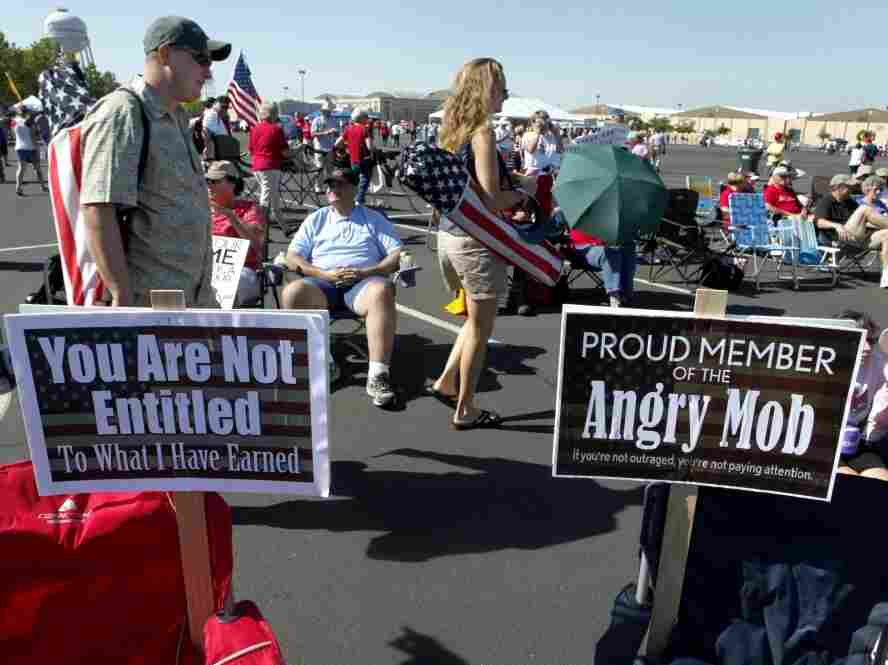 So who are exactly are these Tea Party people and what do they want?

It's a question not only Republican Party leaders have been asking themselves and each other for a number of months; students of American politics have been seeking answers as well.

One of the best outsider guides to the Tea Party movement is Jonathan Rauch, a contributing editor at National Journal and a guest scholar at the Brookings Institution.

On Morning Edition Rauch, who has done a lot of deep reporting on the Tea Party, explained that a member of the movement is essentially someone who would've earlier identified as a Republican but now calls himself an independent despite being a conservative and voting pretty much exclusively for Republicans.

In other words, they are the opposite of the Republicans In Name Only or the RINOs many Tea Partiers revile.

They are Republicans Under Another Name (I know, RUAN doesn't really work as well as RINO but it's the best I could do for the time being.)

An excerpt from Rauch's comments (if you want to listen, the ME audio is at the end of this post):

Tea Partiers are white, bright and right on average. The minority presence is relatively small.

That’s one reason they’re so unafraid to vote for Republican candidates in primaries who might lose to Democrats. They say it’s not about party and in their minds it really isn’t.

Rauch has talked with Tea Party movement people and scholars of political movements and reported his findings in a National Journal piece that fills in a lot of details, such as they are.

The big political challenge for the Tea Party, as Rauch points out, is how does the Tea Party change the policies of government, especially if its preferred candidates don't get elected in general elections in large numbers, or it doesn't have leaders who can speak authoritatively on the Tea Party's issues?

As Rauch pointed out on Morning Edition and in his National Journal piece, enacting legislation takes compromise and having someone at the negotiating table.

But many in the Tea Party apparently see this as the kind of impure, old-style politics that, to their minds, has gotten the country in so much fiscal trouble, with big deficits and debt.

So the question remains, how does the Tea Party as it's currently organized (or disorganized as the case may be) become more than just a spoiler for the candidacies of establishment Republican Party candidates?

Rauch says the Tea Party doesn't care as much about political gains as it does for cultural change.

It wants to change the "hearts and minds" of Americans so they become more skeptical of government and more self-reliant, Rauch says.

That seems like a tall order, especially with Baby Boomers entering the years when they will become more dependent on the federal government than ever because of Social Security and Medicare.

Jonathan Rauch talks to Linda Wertheimer about the Tea Party