Accessibility links
Republicans Offer Their 'Pledge to America' : It's All Politics There is little hard evidence that the 1994 Contract with America contributed much to the wave that carried Republicans into power. But it did give House Republicans a checklist for how they would govern.

When Republican leaders of the House gather in a lumberyard in Sterling, Va., this morning to embrace what they call their "Pledge to America," they will be trying to recapture some of the media magic of an earlier campaign effort widely credited with helping them capture control of the House in 1994. 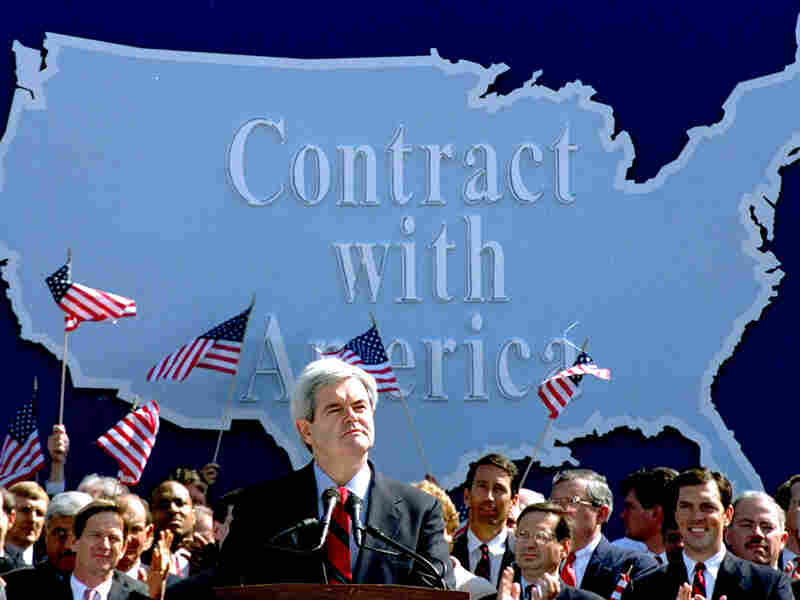 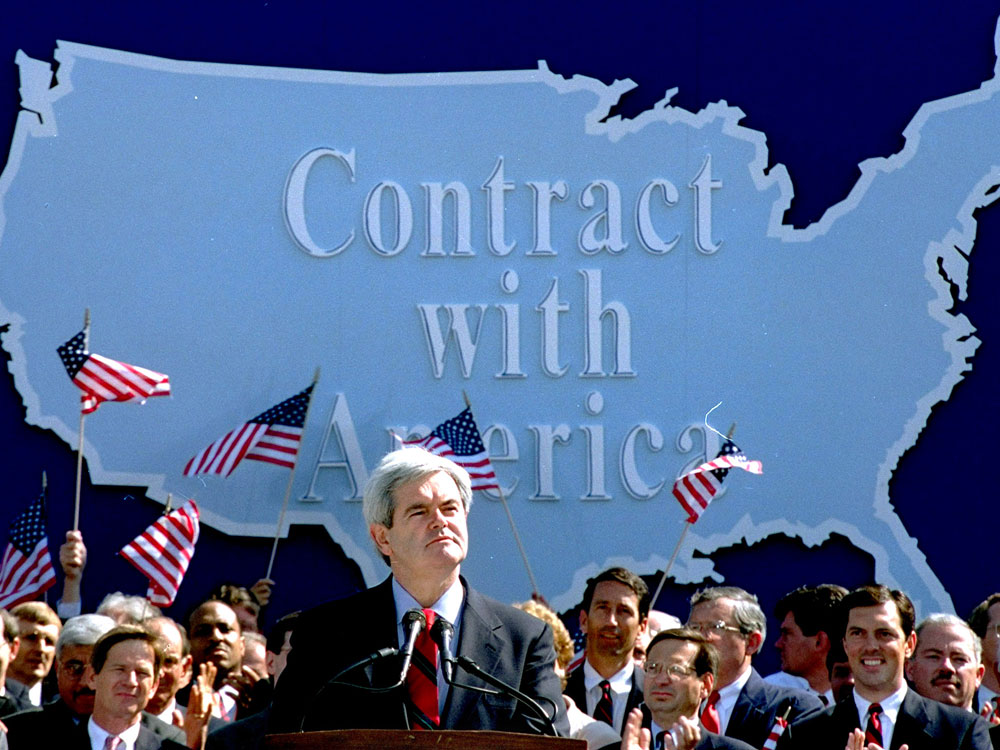 Sept. 27, 1994: Then-House Minority Whip Newt Gingrich and other Republicans unveil their "Contract with America" at a Capitol Hill rally.

It was called the "Contract with America," and it was the brainchild of that era's Republican leadership, spearheaded by Newt Gingrich. Relying on polling data to pick issues with 60% or more support among voters and lifting sizable chunks of Ronald Reagan's speeches, Gingrich and his lieutenants put together a wish list they thought would capture the public imagination.

The Contract was signed amidst great fanfare on the West Front of the Capitol on a spectacularly beautiful September day 16 years ago. In the collective and selective memory that is conventional wisdom, the Contract has become far more than just a successful campaign gimmick. It has become a kind of cause in itself.

Yet there remains little hard evidence that the Contract contributed much to the wave that carried Republicans into power across much of the national government structure that fall, at both federal and state levels, including their first House majority in 40 years.

The Contract of 1994 had several marketing characteristics worth noting.  Calling it a "contract" lent a businesslike air and the act of signing strove to convey a commitment beyond the usual sort of campaign promise. The Republicans were "putting it in writing." Moreover, the term hearkened back to a rich history of declarations, proclamations, charters and compacts from the Magna Carta onward.

Most importantly, it was a marvelous photo opportunity for all the Republican incumbents and candidates taking part. But did it in itself elect enough of them to make them the majority? Or did it simply coincide with other factors looming over American politics at that moment that cast a far longer shadow on that November’s results?

Gingrich continues to promote the Contract as a historic event. "It drives me crazy when some whacked-out amateur tries to explain to me why the Contract was irrelevant," he told a TV interviewer in 2006.

Actually, no one disputes the relevance of the Contract, only the nature of its role and the degree to which it influenced the results. Polls taken right after the election showed relatively few voters were aware of the document, let alone the specific promises it contained.

Another reason to doubt its impact is that Republicans did almost equally well in the Senate, sweeping the close races and gaining enough new seats to control the chamber, and in governorships all around the country. Yet  neither senatorial nor gubernatorial candidates had endorsed the Contract or anything like it. And the Senate leadership, in particular, was rather pointed in its lack of interest in it.

The 1994 "Contract with America" included a pledge from Republicans that within the first 100 days of the 104th Congress they would introduce 10 major pieces of legislation:

— The "Taking Back Our Streets Act" (anti-crime package)

— The "Personal Responsibility Act" (work-for-welfare; no welfare for minor mothers)

The two most obvious factors propelling the 1994 Republican wave were the weak approval numbers for President Clinton and the breakthrough performance of Republican candidates at the statewide, congressional and legislative levels in the South. These factors had been on display for months, well before the Contract, as Republican candidates swept gubernatorial elections and special elections to fill vacancies -- especially in the South.

The downdraft provided by anti-Clinton feelings in 1994 was probably no greater than that affecting the previous two Democratic presidents in their first midterm tests. Jimmy Carter also lost big time at all levels in 1978,  presaging the coming age of Ronald Reagan, which arrived two years later.  Lyndon Baines Johnson had suffered even more egregiously in 1966, presaging his own premature retirement in 1968.

But Carter and Johnson still had the firewall of old Southern voting habits to protect their House majorities in the South. That historic bulwark had also been the reason Republicans never captured the House during the Reagan presidency (even though many of those Southern Democrats voted regularly with Reagan).

Democrats had held the majority of House seats, Senate seats and governorships in the South -- all the way back to Reconstruction after the Civil War. In 1994, all that changed in one day. Republicans became the majority party in Dixie in all three categories and have remained so since, making the South their home region.

One clear factor in the Southern stampede to Republican House candidates that year was not the Contract but newly redrawn district lines. Responding to Supreme Court rulings, Southern states drew maps that concentrated black voters in districts where their numbers all but guaranteed a black candidate would win. As a byproduct, this meant surrounding districts were often distinctly white and increasingly Republican. The Georgia delegation, which had one Republican in 1979, had nine Republicans in 1995 (all white males).

But the Contract's mystique and myth have persisted, in part because the Contract was the focus of so much attention after the GOP came to power in the House and Gingrich became speaker.

The actual text of the Contract consisted of two main parts. The first cited eight changes the GOP proposed to make in House procedures on the first day they elected a speaker and other officers. These included applying various labor laws to congressional employees and limiting the terms of committee chairs to six years.

These eight vows were accomplished as promised and altered the way individual members dealt with their colleagues, day to day and over the course of whole careers. But they did not capture the imagination of the public at large.

The second part offered 10 bills the prospective Republican majority promised to bring to a floor vote within 100 days of taking power. These included a line item veto for the president, a limit on the years a member could serve in the House and a balanced budget requirement (unless three-fifths of the House voted otherwise). It tried to make the death penalty easier to impose and to convict accused criminals in court.

The House itself did very well by its promises, passing every one of the Contract items save the term limits. This was somewhat embarrassing, as it was the provision most odious to individual members' ambitions. But even here, nearly all House Republicans were true to their signatures. The term limits failed only because they required an amendment to the Constitution, and the required two-thirds vote was more than the new Republican majority could muster.

The rest of the Contract's legislative list got out of the House but met a typical fate in the Senate. Republicans there fell short of two-thirds for the balance budget amendment and never even took up most of the House-passed bills.

Nonetheless, the legacy of the Contract has been to provide a convenient metaphor for the politics of 1994 in general, a shorthand way for the media and other observers to refer to the more fundamental forces that were affecting voter sentiment and the expression of that sentiment on Election Day. And that, combined with some self-promotion here and there, has been enough to keep both the mystique and the myth of it alive.