Accessibility links
Joe Miller's Private Security Handcuffs Alaska Journalist : It's All Politics Private security guards handcuffed the editor of a news site at a public school. The editor said he was trying to ask Miller questions about some alleged dubious behavior in his work background, the kind of questions Miller said he won't answer. 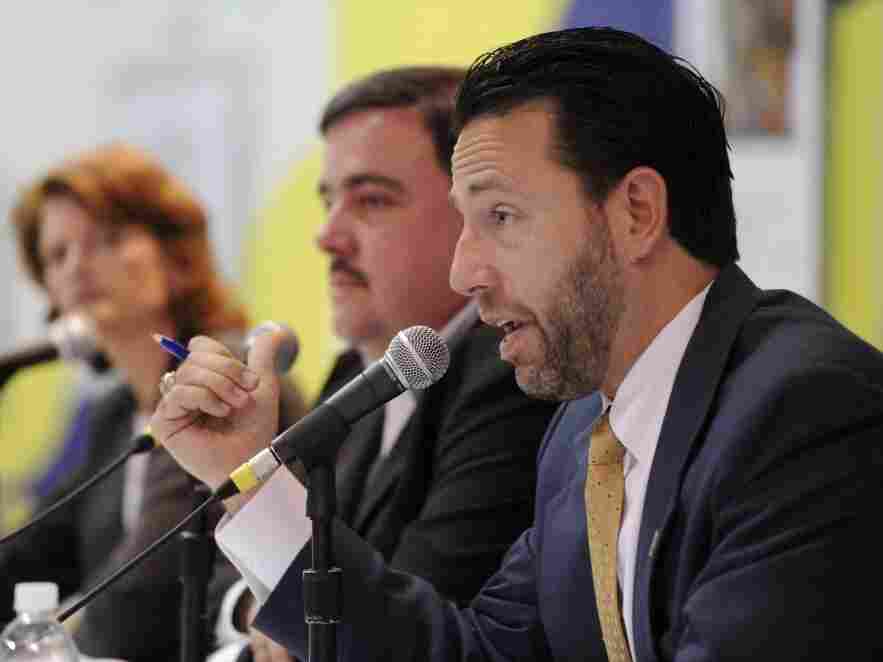 Joe Miller, the Alaska Republican nominee for U.S. Senate, is getting more attention Monday but definitely not the kind a candidate usually seeks just weeks before the election.

According to news reports, Miller's private security guards on Sunday handcuffed and detained the founder and editor of an Alaska news web site in a public middle-school hallway.

The school was the site of a town-hall meeting. After the meeting,  as Tom Hopfinger of the Alaska Dispatch attempted to question Miller, the security guards moved in and, according to Hopfinger, told him he was trespassing.

When Hopfinger asked them to explain themselves, they handcuffed him until, as Hopfinger puts it, he was freed 30 minutes later by the Anchorage police.

Hopfinger has his version of the story on his web site. An excerpt:

Hopfinger was reportedly pressing Miller on whether the candidate had ever been reprimanded for politicking while working at the Fairbanks North Star Borough in 2008. Alaska Dispatch and other media have sued for the release of records related Miller's time at the borough. Various accounts of what happened next generally agree on this course of events:

Joe Miller has his version of the incident on his campaign web site.

“While I’ve gotten used to the blog Alaska Dispatch’s assault on me and my family, I never thought that it would lead to a physical assault. It’s too bad that this blogger would take advantage of a “Town Hall” meeting to create a publicity stunt just two weeks before the election.”

The Miller campaign was required by the facility to provide security at the event. Even though Joe had spent nearly an hour freely answering questions from those in attendance, the blogger chased Miller to the exit after the event concluded in an attempt to create and then record a ‘confrontation’ with the candidate. While Miller attempted to calmly exit the facility, the blogger physically assaulted another individual and made threatening gestures and movements towards the candidate. At that point the security personnel had to take action and intervened and detained the irrational blogger, whose anger overcame him. It is also important to note that the security personnel did not know that the individual they detained was a blogger who reporting on the campaign. To them, the blogger appeared irrational, angry and potentially violent.

Miller recently announced he wouldn't be answering questions about his background or any that he deemed "personal" from the Alaska media anymore, including presumably Hopfinger.

This is like throwing down the gauntlet in front of reporters, professional and citizen journalists alike. So he pretty much guaranteed that reporters will be shouting questions at him in school hallways and elsewhere.

Recent polls have shown the Senate race in Alaska to be tight, with Millerwho has Tea Party support, holding a narrow lead over fellow Republican Sen. Lisa Murkowski  who he beat in the GOP primary. She is running for re-election as a write-in candidate.

Scott McAdams, the Democrat and Sitka mayor, is trailing both Miller and Murkowski.