Accessibility links
Christine O'Donnell Stuns Audience With 1st Amendment Gaffe : It's All Politics Christine O'Donnell appeared not to know that the First Amendment requires the separation of church and state. She revealed this lack of knowledge at a debate with rival Chris Coons at before an audience of law professors and students. 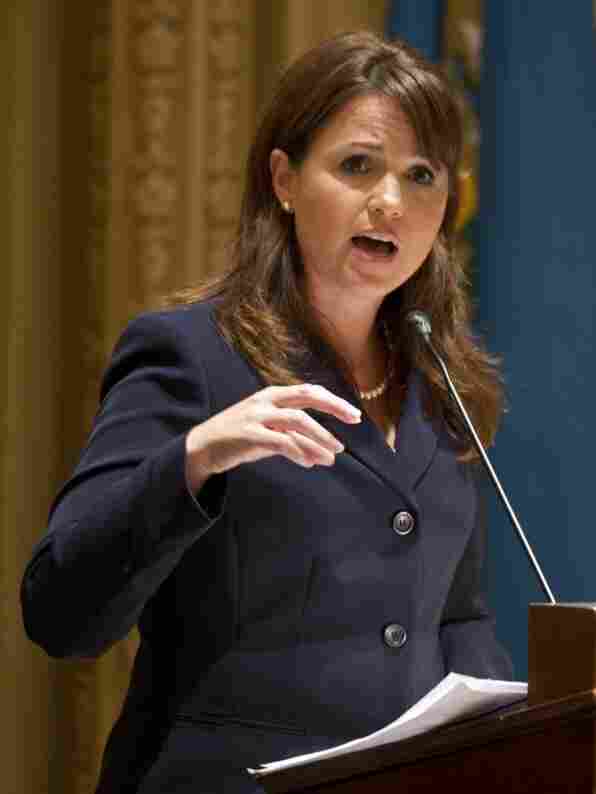 Just when you thought Christine O'Donnell, the Republican nominee for U.S. Senate in Delaware, could do nothing further to top herself, she does.

At a Tuesday morning debate with her Democratic rival Chris Coons, she appeared to be aggressively ignorant of the fact that the First Amendment requires the separation of church and state.

Making matters worse, the audience was actually filled with people with presumably more than a passing familiarity with the Constitution: law professors and students.

The exchange came in a debate before an audience of legal scholars and law students at Widener University Law School, as O'Donnell criticized Democratic nominee Chris Coons' position that teaching creationism in public school would violate the First Amendment by promoting religious doctrine.

Coons said private and parochial schools are free to teach creationism but that "religious doctrine doesn't belong in our public schools."

"Where in the Constitution is the separation of church and state?" O'Donnell asked him.

Her comments, in a debate aired on radio station WDEL, generated a buzz in the audience.

"You actually audibly heard the crowd gasp," Widener University political scientist Wesley Leckrone said after the debate, adding that it raised questions about O'Donnell's grasp of the Constitution.

Not only is this extraordinary because O'Donnell is running for the U.S. Senate, but she represents a political movement, the Tea Party, that has made a fierce adherence to the Constitution one of its fiercest principles.