Accessibility links
Jack Conway Defiant On Rand Paul-Christianity Ad : It's All Politics Jack Conway, a Kentucky Democrat running for Senate, denied questioning Rand Paul's faith. He told NPR he was merely saying Paul should be held accountable for belonging to an irreverent club in college. He also said he would fix the new health law. 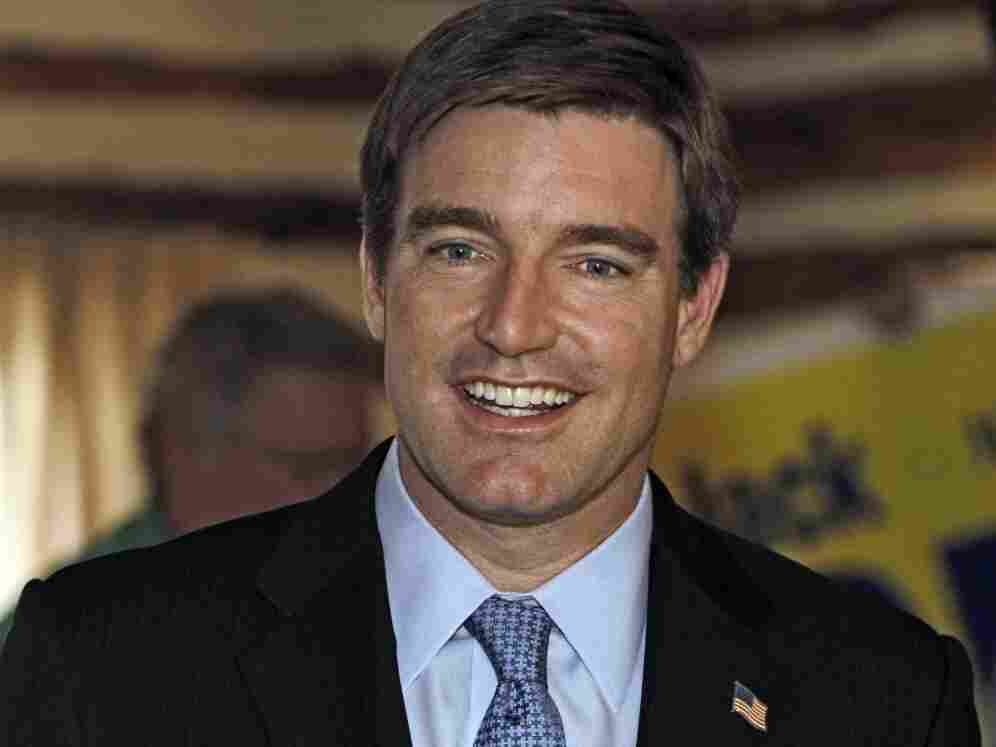 Jack Conway, the Democratic nominee for U.S. Senate in Kentucky, has been hotly criticized from the political right, left and middle, for his attack ad on his Republican opponent, Dr. Rand Paul who, by the way, appears to be ahead in the latest polling.

The ad, which asks why Paul as a college student belonged to a "secret society" which "mocked" Christianity, was clearly aimed at raising doubts about the Republican in the minds of voters, many of whom take their Christian faith very seriously.

In a discussion with NPR's Robert Siegel, an All Things Considered co-host, Conway didn't retreat an inch from the attack, saying that candidates must be accountable for their actions.

In fact Conway, Kentucky's attorney general, gamely used the interview as yet another opportunity to ask the same questions raised in his ad called "Why?"

Asked by Robert why he seemed to be questioning Paul's faith, Conway said:

I'm not questioning his faith, Robert. I'm questioning his actions. Rand Paul joined a group when he was in college. And this group had been banned by the president of Baylor (University) because it, quote, made fun of Christianity and Christ.

And you know, Rand Paul has not denied these charges. These stories have been printed in six very reputable media outlets. And when asked questions about them he refuses to answer.

The line about the tied-up woman referred a story first revealed nationally by GQ that described a college prank in which Paul and others conducted what amounted to a mock kidnapping and religious ritual.

Robert made the point, as others have, that the behavior by now 47-year old Paul that Conway spotlighted happened when the Republican was a very young man, a teenager even.

How far do you take this before it reaches absurdity, was the implication of Robert's question:

ROBERT: Are you running on your adolescence when you run for Senate?

CONWAY: No, you’re not running on your adolescence. But you have to be accountable for your actions.

The interview also touched on substance of Conway's views on important issues.

Robert asked Conway to explain what he meant when he said that as a senator he would work to change the new health-care law.

Conway has used health care as one way to draw contrasts with Paul who has said he would repeal the new law, a position taken by other Republican candidates supported by the Tea Party movement.

CONWAY: Well, there’s a big distinction on this issue. I’m for fixing it, improving it. And Rand Paul is for repealing it. He also called for a $2,000 deductible for Medicare and our seniors just can’t afford that. The current deductible is about $155.

Here’s what i would do. I would allow for Medicare to engage in bulk purchasing, to negotiate for lower prescription prices the way Medicaid does and the way the VA does.

If we were to do that, that would be about $200 billion in savings. It makes no sense to me that we went through this health-care debate looking for potential savings and left those savings on the table. So Robert, that would be the first piece of legislation I would introduce if I get to the U.S. Senate.

Robert pointed out, correctly, that the Senate couldn't get 60 votes for that earlier this year before the situation turned south for Democrats. What made Conway think he could get that passed now?

What about the Bush tax cuts, would you let them sunset or extend them? Robert asked Conway.

Because of the weakness of the economy, he would extend them for the time being, Conway said.

Robert pressed him on when he would allow some tax increases in order to fight federal deficits. Conway sounded a lot less forceful than he did on the issues of Paul being accountable for his behavior as a teenager or when the Democrat talked of beating pharmaceutical companies into submission.

CONWAY: Well, I think you take a look at the fiscal situation of the country. And the tax code is amended from time to time. It seems like nothing ever permanent in the tax code. Even the Bush tax cuts only lasted ten years. So I think we have to watch our recovery, we have to see how receipts are going, we need to make certain we're creating jobs, then figure out what the appropriate level of taxation is.