Accessibility links
Sharron Angle Evades Media Using Decoy : It's All Politics Sharron Angle exited a Reno campaign event while a decoy distracted the media. She, like fellow Tea Party favorite Joe Miller, has inverted the usual rules of the political challenger to a long-time incumbent which is to get free media. 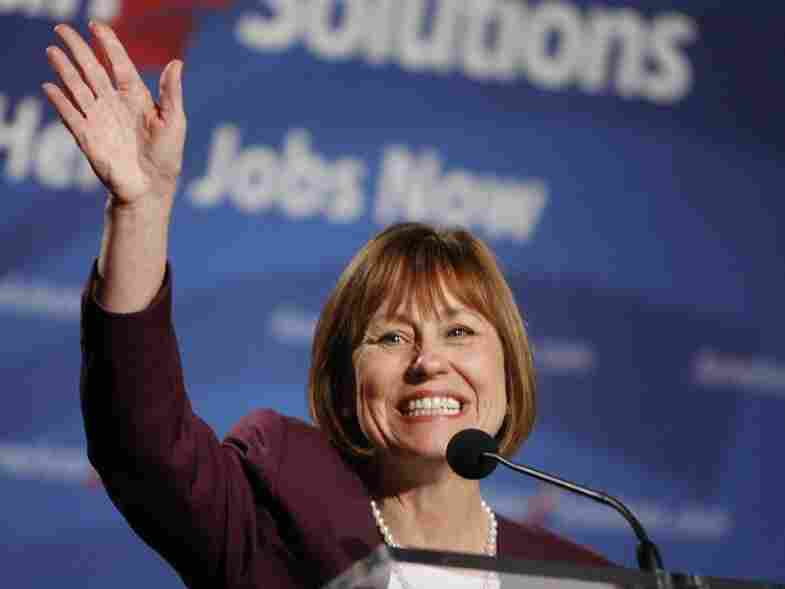 In another example of how Tea Party candidates have changed the traditional rules of political campaigning, Sharron Angle dodged the media Monday, using a decoy to escape reporters who had hoped to talk with her after a campaign appearance.

The Las Vegas Sun reported that Angle, the Republican nominee and Tea Party favorite, spoke for about five minutes at the Microsoft Licensing office in Reno while TV news crews and reporters waited for her outside.

Then the dodge began. According to the Sun:

As the event was coming to a close, a campaign staffer in a car near the assembled press reportedly spoke loudly into his cell phone, saying: “She’s Ready? She’s coming out now?”

Two women then got into his car, while Angle apparently went out a side door, avoiding TV cameras altogether.

Typically at the end of a political campaign, most challengers running against a long-time incumbent are lusting after any chance to get on the airwaves without having to pay for it.

It's called free media and it typically lets a candidate keep her name and message out in front of the public while saving money that would otherwise have to be spent on campaign ads.

But Angle is so well funded in her race against Senate Majority Leader Harry Reid, her Democratic rival, that she doesn't need to worry about paying for ads and therefore it appears she couldn't care less about free media.

Angle has earned a reputation for running from the media during the campaign though there was a brief period when she appeared to take the challenger's more traditional route of entertaining media questions.

Her catch-me-if-you-can approach to the media and that of her fellow Tea Party favorites in Alaska and Delaware, respectively, Republican Joe Miller, who flatly refused to talk with Alaskan media and Christine O'Donnell in Delaware stiff-arming the national media, seem clearly intended to safeguard the candidates from saying things they might come to regret or from having to answer tough questions.

But in both cases, it really hasn't seemed to work since the candidates have still harmed themselves with either comments made at campaign events or details from their pasts.