Accessibility links
Christine O'Donnell Closes Gap With Chris Coons In Pre-Gawker Poll : It's All Politics The GOP Senate nominee is now 10 points behind the Democrat, cutting his lead in half in two weeks. The poll was conducted before the controversial Gawker which has created something of a sympathy backlash for her. 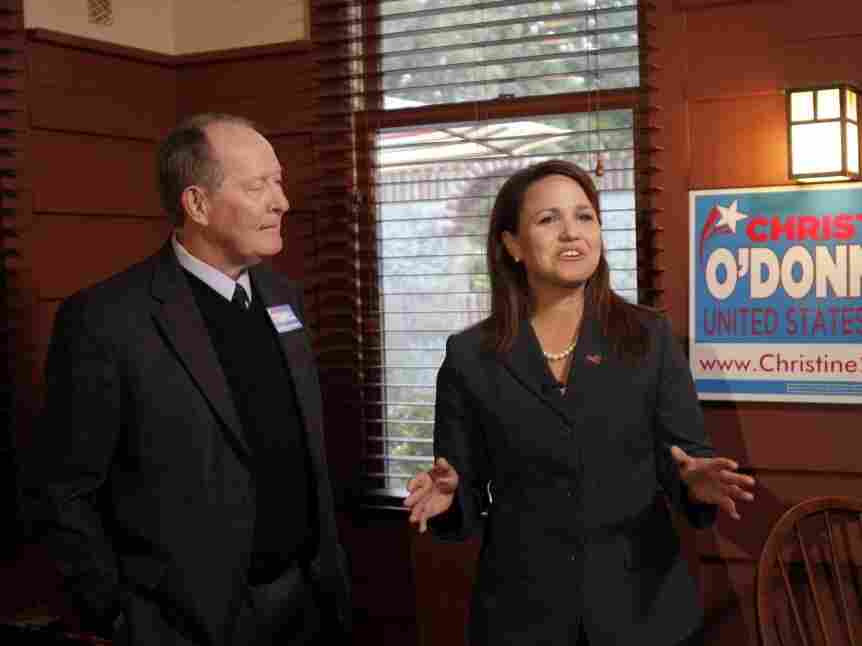 Christine O'Donnell is surging and not just in terms of web hits owing to the controversial Gawker story about her Halloween date three years ago.

Two weeks ago, Coons' lead was about 20-percentage points over O'Donnell whose candidacy was increasingly seen as doomed by many.

It still may be. A ten-point lead in a statewide race is still substantial only days before an election.

But to have so much movement towards O'Donnell in a race that had appeared settled is extraordinary if this poll is capturing public sentiment accurately.

It's especially remarkable given the gaffes O'Donnell has made, from her now infamous "I'm not a witch" ad to her demonstrated lack of knowledge about the Constitution during a debate at a law school.

O'Donnell has consistently been more popular in the conservative, less urbanized parts of the small state and that appears to remain the case.

From Monmouth's report on the poll:

O’Donnell has actually pulled into a 49% to 43% lead in the southern part of the state (i.e. Kent and Sussex counties). Two weeks ago, this region of the state was divided at 47% for O’Donnell and 46% for Coons.

The Democrat continues to hold a sizable advantage in New Castle County, but the current 56% to 36% margin is down from the 63% to 33% edge he held earlier this month.

O’Donnell has also made gains among independent voters, now leading Coons 47% to 42% among this voting bloc.

Two weeks ago, she trailed in the independent vote by 51% to 41%.“While Coons still has the advantage, it has to be uncomfortable knowing that O’Donnell was able to shave 9 points off his lead in just two weeks. The interesting thing is that while her vote total has risen, the majority of Delaware voters still say she is unqualified for the post,” said Patrick Murray, director of the Monmouth University Polling Institute.

The poll was conducted before the eruption of the Gawker web story about an alleged, chaste one-night stand between O'Donnell and an anonymous man who Gawker paid for his story.

O'Donnell's campaign has denounced Gawker's action as sexist. An excerpt:

"This story is just another example of the sexism and slander that female candidates are forced to deal with. From Secretary Clinton, to Governor Palin, to soon-to-be Governor Haley, Christine's political opponents have been willing to engage in appalling and baseless attacks -- all with the aim of distracting the press from covering the real issues in this race.

The Coons campaign has also excoriated the Gawker story. From Politico:

“The Gawker item is despicable, cowardly and has absolutely no value at all to any Delaware voters,” Coons spokesman Daniel McElhatton told POLITICO. “We denounce it with great vigor.”

The Gawker story, which has been roundly criticized, points to the general difference between old media and new. With few exceptions like tabloids, old media doesn't pay for stories.

The ethics of most more established media companies wouldn't allow such a story to be run or broadcast anonymously.

There would also be the question of whether the story was even newsworthy.

Andrew Sullivan on The Daily Dish, for one, doesn't think it is newsworthy:

Gawker has an anonymous, and vile, kiss and tell, which has not a smidgen of journalistic justification and is merely a cowardly, brutal and misogynist invasion of privacy (hence no link). It was also apparently paid for...

The Gawker story, which again, hit the Web before this latest poll, appears to be creating something of a sympathy backlash for O'Donnell. So, theoretically, it could even add to her momentum, making the race even closer.

Gawker's editor has defended the decision to run the story.