Accessibility links
ANALYSIS: Searching For What To Say About The Election : It's All Politics Top problem? Six in 10 voters said the economy. Independents voting Republican? Six in 10 said that's what they did. The numbers that got Democrats in trouble? You guessed it.

Searching For What To Say About The Election? Focus On 60-40

Searching For What To Say About The Election? Focus On 60-40 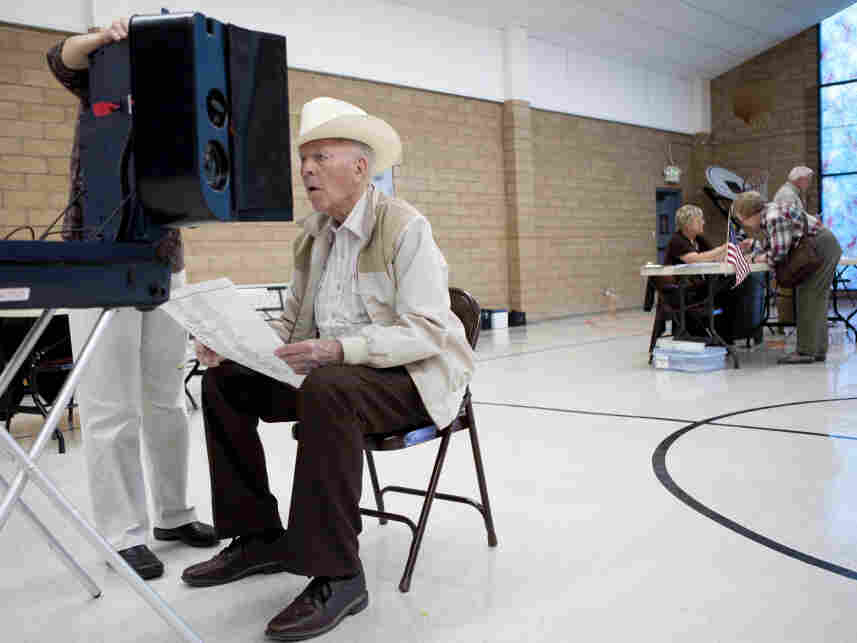 If we're looking for a good name for this week's Republican tsunami, here's a vote for calling it the 60-40 election.

Exit polls show 6 in 10 independent voters this week named the economy as the country's top problem (no other issue was even a contender).  No surprise that among those who saw it as the top problem, nearly all thought economic conditions in the U.S. were bad and might be worse next year. And no surprise that when asked about the country's direction, 6 in 10 said it was on the wrong track.

Similarly, almost 6 in 10 voters who usually call themselves independents told exit pollsters they had voted Republican this time. That's an enormous turnabout from the 2006 and 2008 cycles, when a similarly disproportionate share of the independents expressed their unease and disapproval by voting Democratic.

This year, of course, the targeted party had flipped. The Republicans who were scapegoats of the last two elections of George W. Bush's presidency had become the cavalry, riding to the rescue.

Six in 10 of those aged 65 or older who voted chose Republicans, according to the exit polls. This was a considerable improvement over the percentage in this age cohort who voted for GOP nominee John McCain in the 2008 presidential election (although this age group was McCain's best).

Having the 65-plus crowd grow fonder could not have been better timed for the GOP. Because this year, fully one-quarter of all the voters were 65 or older. That represented a major comeback for the category, as they were just 16% of the total electorate in 2008 and were actually outvoted by people under 30 for the first time since exit polls began.

It turns out the "Modern Maturity" folks still had plenty of fight in them.
Similarly, the proportion of white voters backing Repubicans this fall was 60-40. And it was not all about white men. White women also broke Republican this year, which was what supercharged the preference of the category to the 60-40 level.

Thinking in terms of 60-40 also fits because this election so thoroughly reversed the momentum of 2008, which had produced majorities of about that magnitude for Democrats in the U.S. House, the Senate and the governorships.
The Democrats began 2009 with 30 governors, before President Obama's cabinet-making took a few away. It then took several months of special elections for the majority to reach 59% in the House, and it took some tortuous recounts in Minnesota and a party switch in Pennsylvania to get them to 60 votes in the Senate.

But those were heady days for the Democrats, a moment of hegemony they had not seen since the highwater mark set after the Watergate fiasco and the resignation and pardon of Richard Nixon in 1974. Democrats talked a lot about a "watershed" election, a moment in time when everything changed and energy flowed in a different direction (like water reaching a continental divide). But those days did not last.

There was much talk about what could be done with such a large contingent in the House (258 for a time in 2009) and what a 60-vote bloc in the Senate might accomplish (the latter number being far more useful because it was just enough to cut off debate and move to a vote on the Senate floor). And, in a real sense, much was done with those historically robust numbers. The stimulus, the health care law and the re-regulating of Wall Street all happened because the Democrats had votes to burn.

But one might say the Tea Party arose, and then the Republican Party got back on its feet, precisely because the Democrats had those votes to burn and were willing to push the envelope. They tried the patience of the public. When that happens, the public usually pushes back.

This week, we have seen what a little pushback can do when it gets multiplied across a landscape of joblessness and anxiety. The public may think both parties are to blame for all this, but the election suggests they see the blame dividing 60-40, with the majority going to whoever is in power.

Stick around, in another two years the target may change again.