Accessibility links
Nancy Pelosi Keeps Low Profile; Mum On Future For Now : It's All Politics The first woman to serve as House speaker was said to be set to discuss her future on ABC News. Pelosi kept a low profile Wednesday, the day after her party suffered historic losses of House seats and lost its majority. 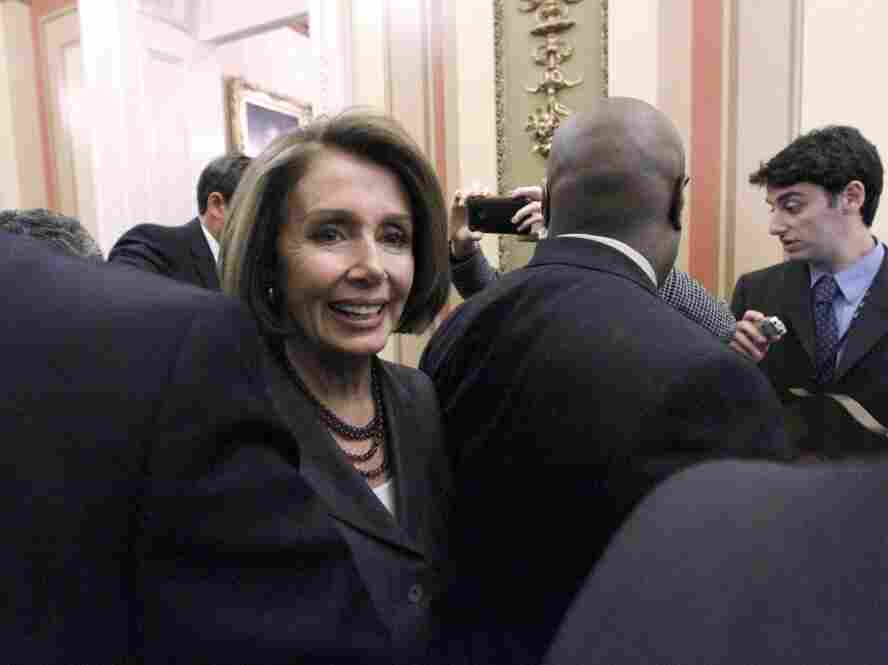 Speaker Nancy Pelosi heading through the Capitol for a TV interview the day after the "shellacking." Alex Brandon/AP Photo hide caption

She couldn't avoid the inevitable questions however. It seemed everyone wanted to know what the only woman to ever rise to be second in the line of presidential succession has planned.

Would the 70-year old San Francisco progressive leave the House leadership or Congress altogether, as other speakers who found themselves in similar positions have done, or would she try to hang on?

It was unclear whether she'd be making an announcement with Sawyer but the possibility was certainly hanging out there. Indeed, The Hill publication suggested she would be discussing her plans.

House Republican Leader John Boehner of Ohio who is presumed to be the next speaker, said at a Wednesday news conference that Pelosi had tried to reach him and left a friendly voicemail. So it goes when power changes hands in Washington; the ascendant hold news conferences, the fallen leave voicemails.

CNN's Dana Bash reported that she and other journalists staked out Pelosi's speaker's office. When Pelosi was spotted leaving the suite surrounded by her security detail, Bash said she and other reporters tagged along with the speaker firing off questions about her plans.

The speaker didn't answer those questions. Instead, she led reporters on something of a slow-speed chase, Bash said, as she clearly tried to lose the journalists by traveling a circuitous route through the Capitol.

Meanwhile, requiems for her career are appearing. For instance, Politico's John Bresnahan has a piece headlined "The Rise and Fall of Nancy Pelosi."

Her great failing, the piece asserts, is that she was so sure of the righteousness of the liberal causes she embraced she was insensitive to shifts in public sentiment.

Although she wouldn’t tolerate any internal challenge to her power – just ask former John Dingell, who clashed with her and ended up losing his chairmanship -- Pelosi made a point of reaching out to conservative Blue Dogs in her caucus, and she was the most accessible Democratic leader in modern times for the freshmen and sophomore lawmakers she helped elect the previous two cycles.

And while a consummate politician, Pelosi disastrously misread the mood of the country following enactment of the health care package eight months ago. The California Democrat called it “one more step forward in our drive to realize the promise of ‘life, liberty, and the pursuit of happiness’ enshrined in our Declaration of Independence.”

“Health insurance reform will stand alongside Social Security and Medicare in the annals of American history,” Pelosi declared confidently, predicting Democrats would be able to run on it in November.

The expectation is that if and when Pelosi stands down as leader of the Democrats, Rep. Steny Hoyer, who has served as House Majority Leader, would present himself as her successor.

But Hoyer could have competition. Rep. Heath Shuler, a centrist Democrat from North Carolina, had said that if Democrats had won, he would consider challenging Pelosi since her San Francisco liberal image was political poison for Democrats from more conservative districts.

That desire for new faces to represent House Democrats may still run strong with some Democrats, especially given the kind of drubbing their party took on Tuesday.