Accessibility links
Alaska Starts Counting Write-In Votes For Senate : It's All Politics Miller has filed a federal suit to exclude ballots on which Murkowski's name is misspelled. But he's fighting an uphill battle since federal courts tend to defer to state officials in the running of elections. 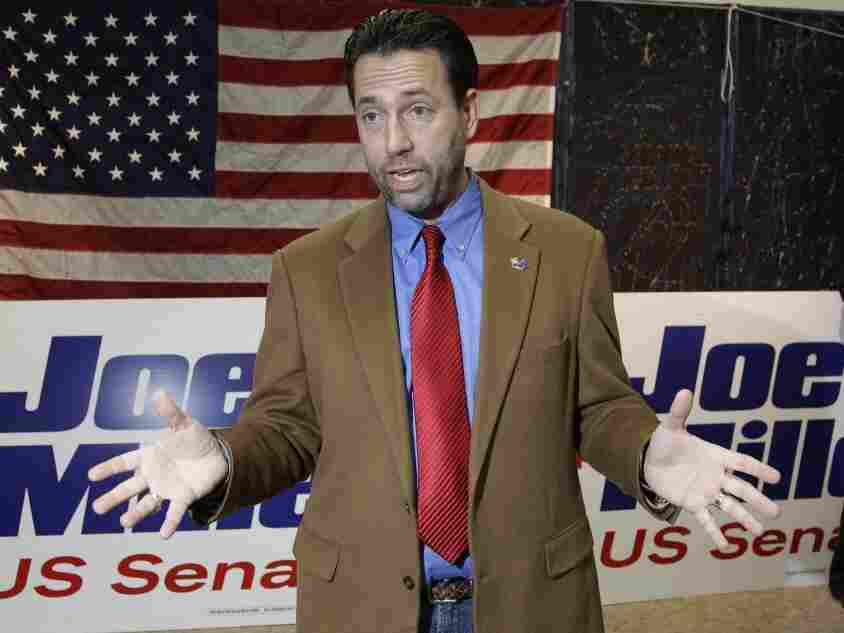 The count is due to go forward despite a federal lawsuit filed by Miller, the Tea Party movement-backed candidate, who wants to stop state officials from counting any ballots in which a candidate's name (read Murkowski's) is misspelled. (The scintillating ballot counting will be webcast on 360north.org starting at 9 am Alaska time.)

State officials have indicated they would give voters some leeway on the spelling. Their instructions for how write-in votes are to be counted tell counters to set aside votes where Murkowski's name is misspelled so that officials can later determine voter intent.

After Miller shocked Murkowski by winning the GOP primary, Murkowski launched a write-in candidacy that many experts considered quixotic since South Carolina's Strom Thurmond in 1954 was the last write-in winner.

On Election Day, Miller got 81,195 votes, or 35.28 percent. But 40.21 percent of the vote were write-ins. Despite Tea Party supporters trying to stymie Murkowski by getting scores of people to register as write-in candidates, Murkowski believes the vast majority of those write-in votes bear her name.

Federal courts have tended to defer to states in how they conduct their elections, 2000's Bush v. Gore U.S. Supreme Court decision notwithstanding.

And states have tended to err on the side of counting write-in ballots in which the voter intent is discernible. The emphasis is on not disenfranchising voters whose choices can be reasonably determined.

... Shall be counted if the oval is filled in for that candidate and if the name, as it appears on the write-in declaration of candidacy, of the candidate or the last name of the candidate is written in the space provided.

This is apparently the language Miller is relying on to make his case for exactitude in spelling.

An excerpt from the Anchorage Daily News (ADN):

Miller's lawyer, Tom Van Flein, is asking a federal judge for a hearing this afternoon.

The ADN also reports that Murkowski maintains a lead over Miller even though that lead shrank somewhat with the counting of absentee ballots.

The state counted about 27,000 absentee and early votes Tuesday, according to Fenumiai, with Miller gaining on the write-in total by about 2,100 votes. At the end of the day, Miller remained 11,333 behind the write-in total.

At the beginning of the day, Miller had been trailing by 13,439 votes.

One irony of Miller's lawsuit is that the advocate of states' rights has turned to a federal court for backup.

Murkowski has said she remains a Republican and will continue to caucus with the GOP if she is ultimately declared the winner.

Her presence in the Senate would be a boost for Sen. Mitch McConnell since she is a believer in traditional Senate practices, like working as a team member within the Senate party caucus. She's also a believer in earmarks, specific spending for home-state projects that are requested by senators.

A Murkowski win would be a major loss for the Tea Party movement, denying it a high-profile win. Coming as it would in her own state, a Miller loss would also be interpreted as a significant sign of weakness for Sarah Palin, the former governor and 2008 GOP vice presidential nominee.

She was a key Miller supporter so his loss, along with other Senate candidates she supported during the midterms, like Christine O'Donnell in Delaware and Sharron Angle in Nevada, wouldn't help her bid to be a bigger force in GOP politics.

Update at 2:15 p.m. ET: Though O'Donnell, Angle and possibly Miller didn't make it, Palin did get behind some winners too. As The Washington Post's The Fix pointed out, she had a "mixed" record. Among the winners she supported were Senator-elect Rand Paul in Kentucky, Governor-elect Susana Martinez in New Mexico and Governor-elect Nikki Haley in South Carolina.