Accessibility links
Deficit Panel Puts Social Security, Mortgage Deduction On Table : It's All Politics But a political firestorm is likely; many of the cuts and tax increases would be very unpopular. Among the proposals are cuts to Social Security and Medicare and and end to very popular tax deductions and credits. 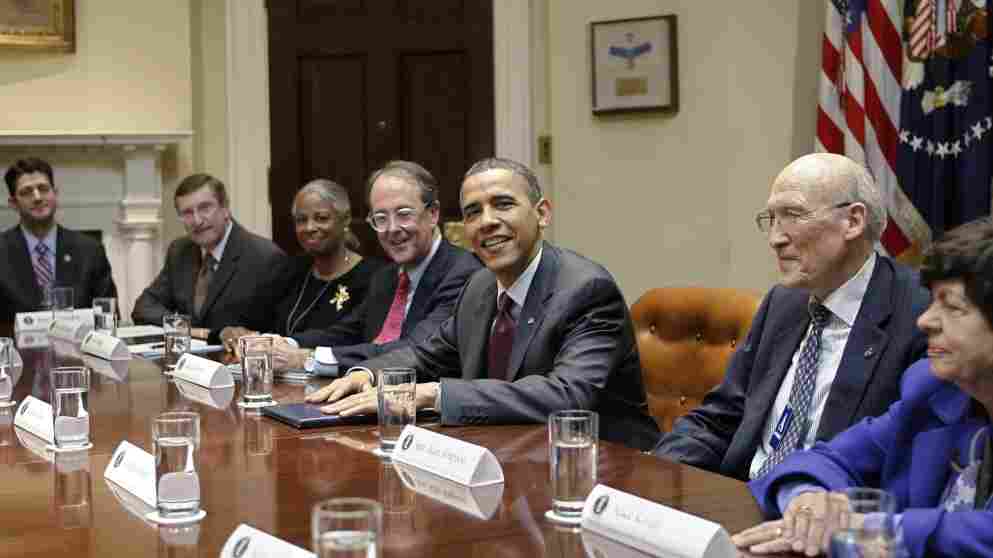 Listen to most experts on federal deficits and the national debt and you'll quickly conclude there's no painless way to stop the unsustainable growth of red ink. The question isn't if it will be painful; it's how painful will it be?

The greater the pain to citizens, the less politically feasible spending cuts and tax increases will be, so it's no idle question.

If you're  going to really tackle the nation's deficits and debt, it's unavoidable. You've got to cut these sacrosanct programs because they account for most federal spending and upward pressure on spending.

And you have to raise additional money through higher taxes to close the gap as well, most experts agree.

Which is why the co-chairs of the bipartisan panel President Obama appointed to make recommendations for cutting deficits and the debt are putting on the table for a national discussion changes to popular entitlements and tax deductions.

Get ready for the political firestorm.

The panel's recommendations include doing away with popular tax-deductions and credits, like the mortgage interest deduction and the deductions companies get for providing health insurance.

On the upside, the panel says that if the nation got rid of all the tax deductions and credits, tax rates could be consolidated and lowered. The simplification that would ensue would allow the alternative minimum tax to be abolished.

They also recommend reducing benefits to wealthier Social Security recipients, raising the age to become eligible for full benefits, and lowering benefit increases by changing how cost of living increases are calculated.

The panel has 18 members and before it can send a particular recommendation to Congress, at least 14 members of the panel have to agree on it.

But not many observers think that will happen because Republicans aren't about to raise taxes, especially not after last week's big win to gain control of the House.

Meanwhile, Democrats aren't likely to allow support entitlement cuts. In fact, many Republicans aren't likely to do that either. That's especially true after making an issue during the recent midterm campaigns of cuts to the Medicare Advantage program contained in the new health-care law.

The draft acknowledges the pain the recommended changes would produce. An excerpt:

We must stabilize then reduce the national debt, or we could spend $1 trillion a year in interest alone by 2020.

A sensible, real plan requires shared sacrifice –and Washington should lead the way and tighten its belt.