Accessibility links
Nancy Pelosi: 'We Don't Let Republicans Choose Our Leaders' : It's All Politics Pelosi said it was the economy, not her unpopularity, that led to House Democrats' losses. In an interview with Morning Edition's Renee Montagne, Pelosi said she wanted to stay her party's leader to defend health and financial laws from the GOP. 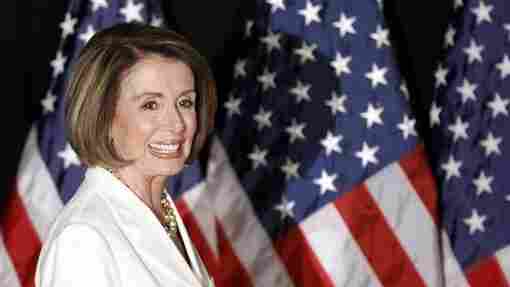 Before Speaker Nancy Pelosi announced her decision to run to be leader of the soon-to-be House Democratic minority, some observers speculated that Republicans might have made her decision easier by attacking her personally.

Pelosi is a partisan fighter who doesn't shy from bare-knuckles politics and rises to a challenge, they said.

They were apparently right, based on Pelosi's conversation with Morning Edition co-host Renee Montagne scheduled to be aired Friday.

Renee asked Pelosi how she would prevent herself from being used once again to effectively demonize House Democrats.

It's no secret that many Republicans were pleased by her decision to seek the leadership post in the new Congress since she affords them a handy target.

Pelosi stuck to the position she has maintained since Election Day, that it was the economy that caused Democrats to lose House control, not her.

The reason the election results are what they are is because we have 9-1/2 percent unemployment in our country. You strike a match of a $100 million of outside unidentified funding, $100 million dollars of campaign ads, two-thirds of which were directed at me and you start a conflagration.

But the point is, we didn’t lose the election because of me. Our members do not accept that. They understand that the public in any circumstance when you have 9.5% unemployment, any party that cannot turn that into political gains should hang up the gloves. I said that before the election...

The reason they had to try to take me down is because I’ve been effective in fighting special interest in Washington DC. Whether it’s the health insurance industry, the financial services industry...

… I’m effective, they had to take me out. I’m also the most significant attractor of support for the Democrats. And it’s because of my commitment to an agenda for America’s working families...

So I’m not looking back on this. They asked me to run, I’m running. We don’t let the Republicans choose our leaders and again, our members understand, they made me a target because I’m effective, politically and policy-wise.

At another point she gave the thumbnail version of why she's running:

So if I had to sum it all up, I’ll say I’m running to put together the strongest plan to work with the republicans to solve problems. The biggest problem is unemployment, I hope we can work together to create jobs. I also want to protect healthcare reform, Wall Street reform, consumer protections that we placed in the law, and to continue to fight for the middle class and I do so with the overwhelming support of my caucus, not the unanimous support.

That last clause was her acknowledgement that some congressional Democrats have said, mostly anonymously, that they would love to see someone else become leader. A fresh face could help the party recover some of its losses in 2012, they say.

But many of the more moderate Democrats who disagreed with Pelosi and created that lack of unanimity were defeated on Election Day since they represented swing or Republican districts.

So the House Democratic caucus that remains is closer in ideology to the liberal Pelosi than it was before. Pelosi indicated that ideological purity wasn't her preference. She'd rather still have a more ideologically diverse caucus if it meant running the place:

I prefer the largest Democratic majority to the leanest of most like-thinking group of people.

While she's committed to defending the health-care legislation from Republicans who vow to repeal it, she is open to changes. Legislation can always be improved, she suggested.

Like President Obama, she thought one area of agreement where Democrats and Republicans might quickly agree was the one in which the new law requires small businesses to report to the Internal Revenue Service on forms known as 1099s purchases of $600 or more.

Critics of this provision, and they are legion, say with much justification that it would create a paperwork burden of huge proportions for business owners. The provision was meant to ensure that the IRS collected more in sales tax to pay for certain parts of the new law.

Pelosi made clear it was the Senate, not the House, that bore responsibility for the provision.

I think we all agree it should go. We passed the repeal of it in the House and it hasn’t passed in the Senate. But the first place I would go would be the repeal of 1099 as a specific provision... We never had it in our bill. The way the process works, we had to accept what was in the Senate bill.

While the 1099 issue is should be relatively easy to get agreement on, the extension of the Bush tax cuts won't be.

On another critical issue the House must tend to and soon, the extension of the Bush tax cuts, Pelosi sounded like she was not in a mood to compromise.

Well, our position in the House has been we support the tax cuts for the middle — for everyone, but not an additional tax cut at the high end.

It’s too costly. It’s $700 billion. One year would be around $70 billion. That’s a lot of money to give a tax cut at the high end. And I remind you that those tax cuts have been in effect for a very long time, they did not create jobs.

In fact, with the tax cuts that President Obama had in the recovery package, we have now, the first, ten straight months of private-sector job growth. Ten straight months. That’s more than ever happened in the eight years of the Bush administration.

So from day one, President Obama and this Congress have been job creators and at the same time giving tax cuts to the middle class, which do create jobs. The tax cuts for the top two percent, have not been job creators.