Accessibility links
Obama In Asia: Midterms Didn't Hurt Me Globally : It's All Politics Obama said it was hard to get other nations to agree to U.S. terms when he had 65% percent approval. If anything has changed, he said, it's that his ties to other leaders are deeper. 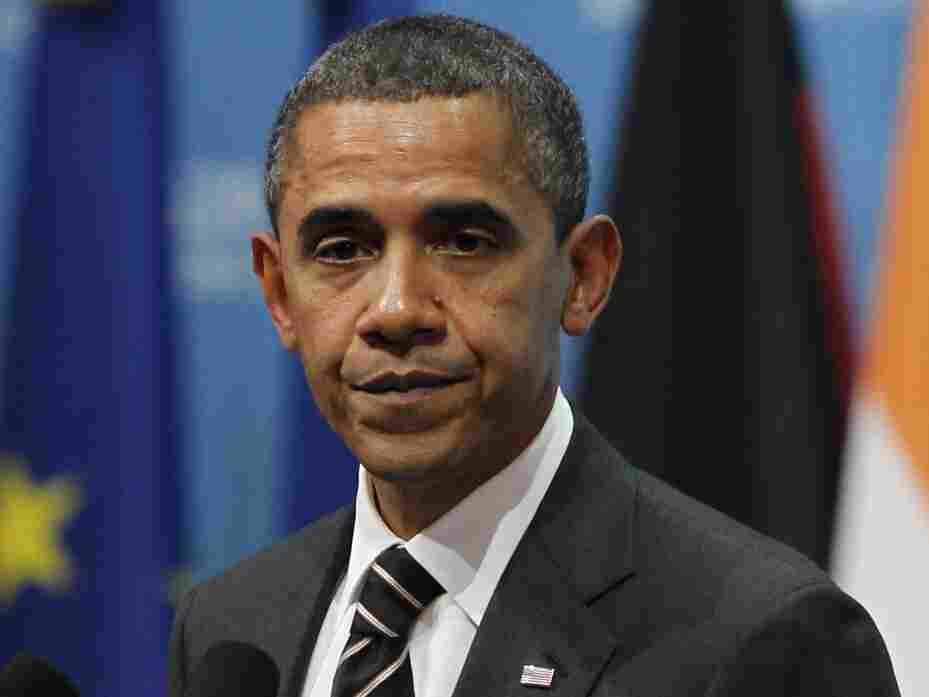 President Obama listens to a reporter at a news conference after the G-20 meeting in Seoul. Charles Dharapak/AP Photo hide caption

While many back home may see him as having been knocked down a few pegs by the Republican midterm-election wave, President Obama assured reporters Friday that his effectiveness internationally was undiminished.

At a post G-20 news conference in Seoul, S. Korea, the president also roundly debunked the Huffington Post report that he was surrendering to Republicans on an extension of the Bush tax cuts for the wealthiest Americans.

CNN'S Dan Lothian asked the president the questions about his international stature post-Election Day and possibly extending the tax cuts for the highest income earners.

The relevant excerpt from the news conference:

DAN LOTHIAN:  Thank you.  After the midterm elections you said that you were open to compromise on the Bush tax cuts.  I’m wondering if you’re prepared today to say that you’re willing to accept a temporary extension for the wealthiest Americans?  And then on an unrelated question, do you feel that the election has weakened you on the global stage?

THE PRESIDENT:  The answer to the second question is no.  I think what we’ve seen over the last several days as we’ve traveled through Asia is that people are eager to work with America, eager to engage with America on economic issues, on security issues, on a whole range of mutual interests.

And that’s especially true in Asia, where we see such enormous potential.  This is the fastest-growing part of the world.  And we’ve got to be here and we’ve got to work.  And I’m absolutely confident that my administration over the next two years is going to continue to make progress in ensuring that the United States has a presence here not just for the next couple of years but for decades to come.

With respect to the Bush tax cuts, what I’ve said is that I’m going to meet with both the Republican and Democratic leaders late next week and we’re going to sit down and discuss how we move forward.  My number-one priority is making sure that we make the middle-class tax cuts permanent, that we give certainty to the 98 percent of Americans who are affected by those tax breaks. I don’t want to see their income taxes spike up -- not only because they need relief after having gone through a horrendous recession, but also because it would be bad for the economy.

I continue to believe that extending permanently the upper-income tax cuts would be a mistake and that we can’t afford it.  And my hope is, is that somewhere in between there we can find some sort of solution.  But I’m not going to negotiate here in Seoul.  My job is to negotiate back in Washington with Republican and Democratic leaders.

The president's message that he still had the same juice as before on the world stage despite his party's "shellacking" wasn't necessarily undermined by his failure to complete the negotiation of a free-trade agreement with South Korea that he inherited from the Bush Administration.

Opening up the U.S. to further Asian imports was always going to be a difficult lift, to say the least, at a time when the U.S. economy is struggling to add jobs domestically.

But if Obama really couldn't be expected to say "Yes, the election left me weaker on the world stage" others were certainly willing to suggest as much.

Although no one has said that Obama was unable to reach agreement directly because of his midterm losses, neither Lee nor other leaders in Seoul for the Group of 20 summit appear eager to help him with his biggest concerns or ingratiate themselves with the American president, as they had a year ago.

For his part, Obama said it was a matter of his novelty and all the hype wearing off:

That doesn’t mean that there aren’t going to be differences, but -- the same is true for my relationship with President Hu.  It wasn’t any easier to talk about currency when I had just been elected and my poll numbers were at 65 percent than it is now.  It was hard then and it’s hard now.  Because this involves the interests of countries and not all of these are going to be resolved easily.  And it’s not just a function of personal charm. It’s a function of countries’ interests and seeing if we can work through to align them.

NPR's own Scott Horsley got to ask a question, too, which was essentially: have the G-20 nations lost their sense of urgency now that the worst of the global financial crisis seems to have passed?

Obama allowed that had happened to a degree. And Scott's question led the president to a baseball metaphor:

THE PRESIDENT:  I think what it means is that in the absence of crisis people probably are willing to hunker down a little bit more on some of the negotiations.  Speed seems less of the essence, and so people think, well, if it doesn’t get solved now maybe we can put this off for another day.

What’s remarkable to me, though, is despite some of those impulses we're still getting stuff done.  And as I emphasized before, we should not anticipate that every time countries come together that we are doing some revolutionary thing.  Instead of hitting home runs, sometimes we're going to hit singles.  But they’re really important singles.  And I just listed some of these out.

IMF reform -- this is something that folks have been talking about for a decade or more.  It’s gotten done.  Financial regulatory reform -- huge lift -- that we talked about in my first G20 summit, it is now coming to fruition.  We've still got some more work to do but we've made enormous progress in a huge  -- really short period of time.  Basel II I think took a decade to negotiate; we got this done basically in a year and a half.