Accessibility links
Obama Rebuffed On Hi-Speed Rail By New GOP Guvs : It's All Politics Republican governors-elect are rejecting federal stimulus money for high-speed rail. They say their states can't afford the added debt and tax burdens that would arise from having to pay their share. But other states are seeking the spurned money. 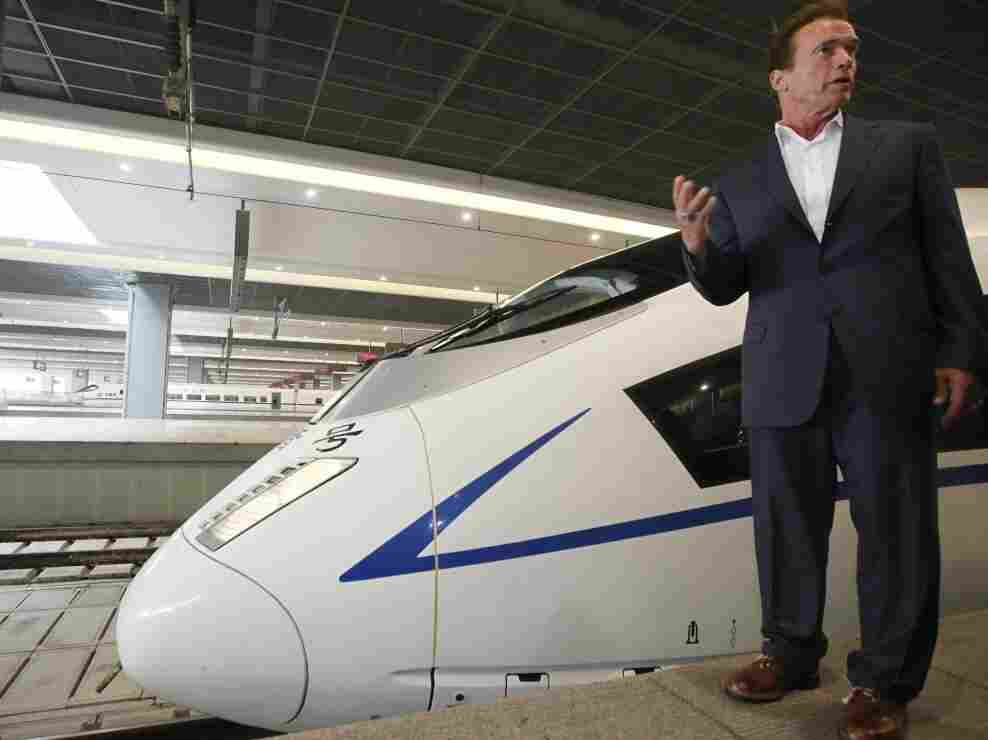 Gov. Chris Christie move over. You have some fellow Republican governors, actually governors-elect, who are determined to show they can reject federal money for large infrastructure projects as easily as you.

Their reason is akin to that offered by New Jersey Gov. Christie when he recently killed the Hudson River rail tunnel project: their states just can't afford to take on the additional debt or tax burdens that would arise from their expected share of the infrastructure spending.

An excerpt from David's report:

"That train is dead.  I said it during the campaign; it is dead.  We are not gonna have it."

That's Ohio Republican governor-elect John Kasich who says he will reject $400 million in federal funds meant to establish passenger-rail service from Cleveland to Columbus and Cincinnati.

In Florida, Governor-elect Rick Scott suggests he might not take $2 billion for high-speed rails linking Tampa to Orlando and Miami.

And Wisconsin Governor-elect Scott Walker, says he will turn down more than $800 million in federal funds for high speed trains between Milwaukee and Madison.

"The bottom line is, right now, I've seen no scenario where the taxpayers of the state of Wisconsin aren't gonna be on the hook for millions of dollars.  And to me, unless there was an ironclad agreement that showed me otherwise, I'm not interested and I think the majority of voters made that very clear in the election."

This is definitely a new paradigm. It used to be that politicians like governors would jump at the chance to accept federal money for projects that would create jobs and new infrastructure.

No longer, at least not in places with Republican governors who are all tapping into voter concerns about federal deficits and debt. More from David's reports:

Riding the wave of anti-big government sentiment that swept them into office, Walker and other Republicans have been slamming the Obama administration's stimulus-funded high speed rail projects around the country as $10 billion in boondoggles that would benefit too few travelers.

"Maybe instead it's time for the administration to reconsider the billions of dollars spent on high-speed rail and instead, put those funds into the use for the roads and bridges, not just in Wisconsin, but around the country."

Walker and Ohio's Kasich wrote to Transportation Secretary Ray LaHood asking that they be allowed to do just that. But LaHood's response is, "No."

In letters to both governors-elect, he points out their states already received hundreds of millions in stimulus funding for roads and bridges and that this money can only be spent on high speed rail.

If the new governors don't want it, LaHood says the money will be re-allocated to other states that want improved, cleaner and more efficient transportation options and the thousands of jobs the high-speed rail projects would create.

And already, officials in New York, Illinois and California are trying to put dibs on the $3 billion dollars-plus Florida, Ohio and Wisconsin might give up.

As was true in New Jersey when Christie ordered, at stake are jobs. In the case of the high-speed rail project it would be the workers who make the trains themselves.

Another excerpt from David's report:

Caught in the middle of the backlash are workers for companies such as Talgo, a manufacturer of high-speed trains that just opened a new plant, bringing new jobs to Milwaukee.

Talgo spokeswoman Nora Friend says the company is now faced with telling those workers they might be out of jobs when the trains they are making now are completed.

But there are Republicans who support high-speed rail, like Rep. John Mica of Florida who is expected to be the next chairman of the House Transportation Committee.

And there are plenty of lobbyists and advocacy groups who are will be working not only these new governors but the state legislators as well.