Accessibility links
Jack Johnson (DC-Area Official, Not Musician) Arrested : It's All Politics Jack Johnson, the county official in Maryland, not the musician, was arrested on corruption charges. The Prince Georges County executive and his wife were arrested as part of a probe in which he allegedly took money in exchange for helping developers 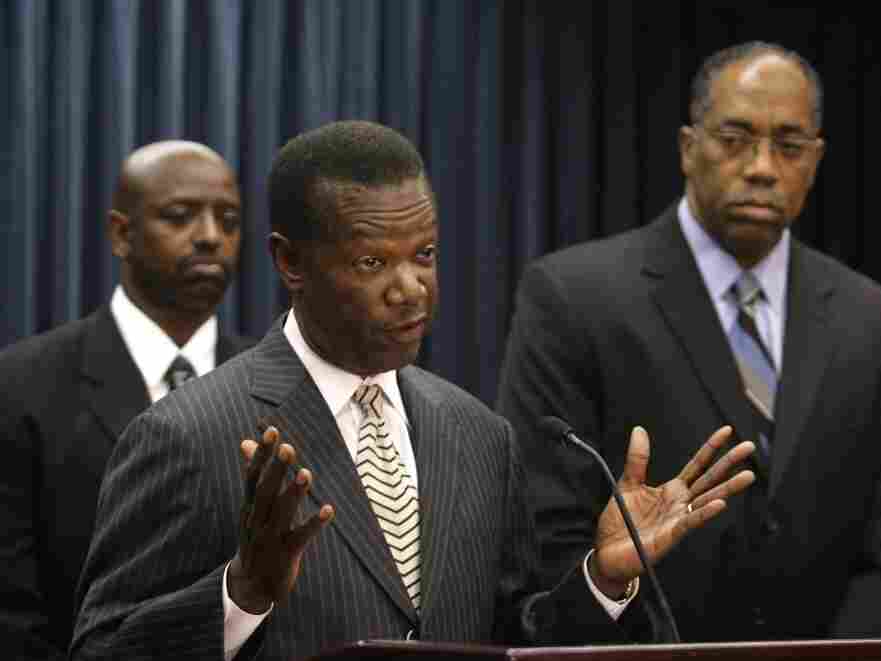 Jack Johnson, the Prince Georges County Executive, not the performer, along with his wife, was arrested on federal charges.  Luis M. Alvarez/AP Photo hide caption

A public corruption probe by federal agents in a Washington, D.C. suburb has produced a law-enforcement affidavit that makes for some fairly compelling reading as these things go.

It emerges from the investigation of Jack Johnson, not the popular musician but the county executive of Prince Georges County, Maryland at the end of his term.

Johnson and his wife Leslie were arrested Friday and charged with witness tampering and destroying evidence related to the federal investigation of a pay-to-play scheme. Johnson is accused of accepting money from developers in exchange for getting their projects federal funding.

Through informants and wiretaps, the Federal Bureau of Investigation had been building a case for years, according to the affidavit.

On Friday, agents doing surveillance, observed Johnson allegedly accept $15,000 from an unnamed developer. After the money allegedly changed hands, the agents walked into the room, identified themselves, took Johnson's cell phone, imaged it, then gave it back to him.

He then called home and allegedly told his wife to get rid of cash in the house. Some agents were listening to their conversation. Other agents were at his home's front door.

The county official, on the phone with his wife, allegedly told her not to answer the door, then allegedly instructed her where to find the cash.

According to the affidavit:

The affidavit states that after a panicked search for the check, the wife allegedly tore the check up and flushed it down a toilet. The authorities called a plumber according to a news report to try and retrieve the evidence.

As the wife left the house, she was stopped by two female agents who later searched her and allegedly found the $79,600 in her underwear.

This is right up there with the nearly $100,000 found in former Rep. William Jefferson's freezer.

One only-on-the-Internet aspect of this story is that Google searches of "Jack Johnson Arrested" spiked far more than one might have expected for a Prince Georges county official.

A lot of people evidently thought it was the performer who was in trouble. It was manifestly not.