Accessibility links
Nancy Pelosi Solves Internal Fight; Creates New Post : It's All Politics Nancy Pelosi created a new position to end the fight for one post between two of her lieutenants, Steny Hoyer of Maryland and Jim Clyburn of S. Carolina who were both vying for the position of minority leader. 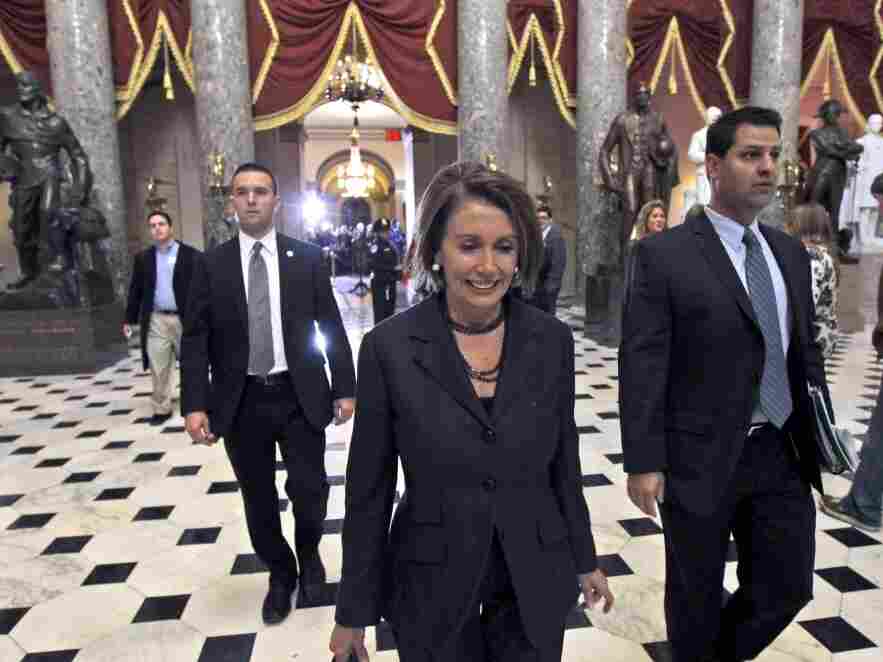 Why didn't King Solomon think of this? Speaker Nancy Pelosi came up with a solution to a distributional problem that was so much easier than splitting the proverbial baby, so to speak.

As was widely reported over the weekend, Pelosi solved a battle in her leadership team by creating another seat at the Democrats' leadership table, assistant leader.

Thus, she ended the game of musical chairs being played by Rep. Steny Hoyer of Maryland and Rep. Jim Clyburn of South Carolina.

The Hoyer-Clyburn fight was causing severe heartburn among congressional Democrats, some of whom felt an obligation to both men.

Hoyer is a moderate who is seen as someone who tempers the more liberal tendencies of others in the leadership.

Meanwhile, the Congressional Black Caucus, a major group within the House Democratic Caucus, was pushing heavily for Clyburn who was the highest ranking African American in Congress.

By creating the new post for Clyburn, Pelosi appears to have gotten past one centrifugal force that could cause her House Democrats to fly apart.

But there's another, and it is Pelosi herself and the fact that there is no new blood in a leadership team that oversaw the House Democrats' loss of 60 seats in the midterm election.

Pelosi and her two lieutenants are all in their 70s. Their ages shouldn't be a disqualifier by itself.

But it sure doesn't help the optics of the situation.

Politico has a great quote that deliciously captures the concern of some House Democrats:

“You have a bunch of senior citizens at the buffet at closing time, fighting over the last piece of meat,” said one veteran House Democrat, who also noted the “frustration of the younger generation.”