Accessibility links
Obama Makes Beeline For Independent Voters : It's All Politics President Obama is signaling that he plans to push hard for bipartisanship. It's an appeal to political independents who say they're against gridlock and want the president and congressional leaders to work together. 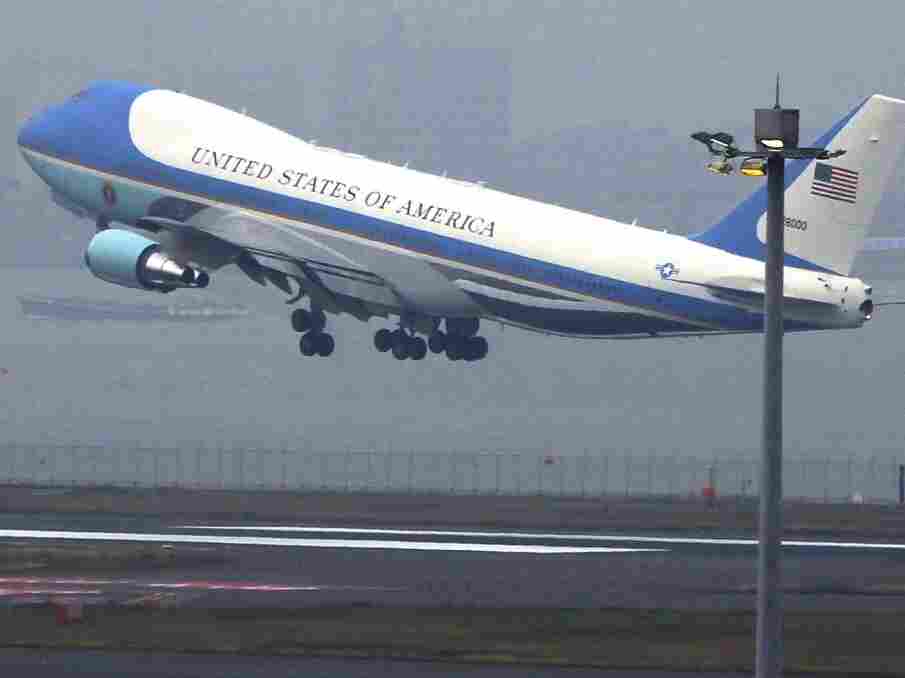 The White House push is on for the hearts and minds of independent voters.

Virtually every time President Obama has talked since the midterms about where he went wrong and what he plans to do about it, he signals he is going after those independent voters who got him to the White House in the first place.

In talking with the news media Sunday on the Air Force One flight back from Asia, the president again sent the message that he will increase his efforts at working across party lines to reach agreement where possible.

For instance, he said:

Campaigning is very different from governing.  All of us learn that.  And they’re still flush with victory, having run a strategy that was all about saying no.  But I am very confident that the American people were not issuing a mandate for gridlock.  They want to see us make progress precisely because they understand instinctually how competitive things are and how we have to step up our game.

The "competitive things" would be global competition which the president had just spent much time discussing with his foreign counterparts.

In talking about wanting to see the Senate ratify the START treaty with Russia to reduce U.S. and Russian nuclear arms, he didn't mention a single Democrat:

You know, actually, I feel reasonably good about our prospects.  It was voted out of committee with strong bipartisan support.  Senator Lugar is somebody who’s made disarmament one of his signature issues.  In fact, my first trip overseas was with Dick Lugar to Russia.  And we’ve been in a series of conversations with Senator Kyl, whose top priority is making sure that the nuclear arsenal that we do have is modernized.  I share that goal.  We’ve heard from senators like McCain and Graham who say they want to see this done.

Then, in further detailing where he went awry in his first two years, he added:

I neglected some things that matter a lot to people, and rightly so:  maintaining a bipartisan tone in Washington...

So while the left wing of the president's Democratic base might want the president to double down on the liberal agenda, he is signaling mightily, especially to independents, that they can forget about it.

And all you need to do is look at the exit polling from the recent midterm elections to understand his strategy.

The exit polling was pretty clear that independent voters, the pendulum of power in national politics, want bipartisan problem-solving to rule the day in Washington, not gridlock.

From a recent report on a Pew Research Center survey:

Independents want the two sides to work together -- 57% say GOP leaders should cooperate with Obama while about as many (59%) say that the president should work with GOP leaders.

Democrats and Republicans have far different views. They want their party leaders to be much less accommodating to the other side.

But as many Democrats say Obama should stand up to Republican leaders (43%) as say he should work with them (46%).

And Republican voters are even more against bipartisanship than the 43 percent of Democrats.

Currently 66% of Republicans and Republican-leaning voters want GOP leaders to stand up to Obama, up from 47% shortly after the presidential election two years ago.

So all the action is really with the independents, who just two weeks ago were decisive in helping Republicans win the House, just as they helped Obama win in 2008 helped and Democrats win control of Congress ion 2006.

While Republicans benefited from not being the party in power in 2010, the exit polling would seem to suggest that in terms of positioning for the 2012 votes of independents, Obama has made the pivot that at least puts him on course to compete for those voters.

Come 2012, if the president can point to a series of efforts to extend to his Republican opponents a bipartisan hand that were rebuffed, that could help the president argue to independents that he's not the problem.

As Obama suggested, the Republicans are still savoring their fresh midterm gains which were won not just by getting a majority of disaffected independent voters but also by energizing the GOP base, including the Tea Party. That explains the continuance of their "no compromise" message.

But unless independent voters aren't telling pollsters the truth, "no compromise" isn't the message those voters want to hear. Which is what the president appears to be counting on.