Accessibility links
Alaska's Lisa Murkowski Passes Joe Miller In Senate Vote Count : It's All Politics Sen. Murkowski has opened a 1,700 point lead over Joe Miller via her write-in votes. Her lead is only expected to grow as the more than 8,000 remaining write-in votes are counted. 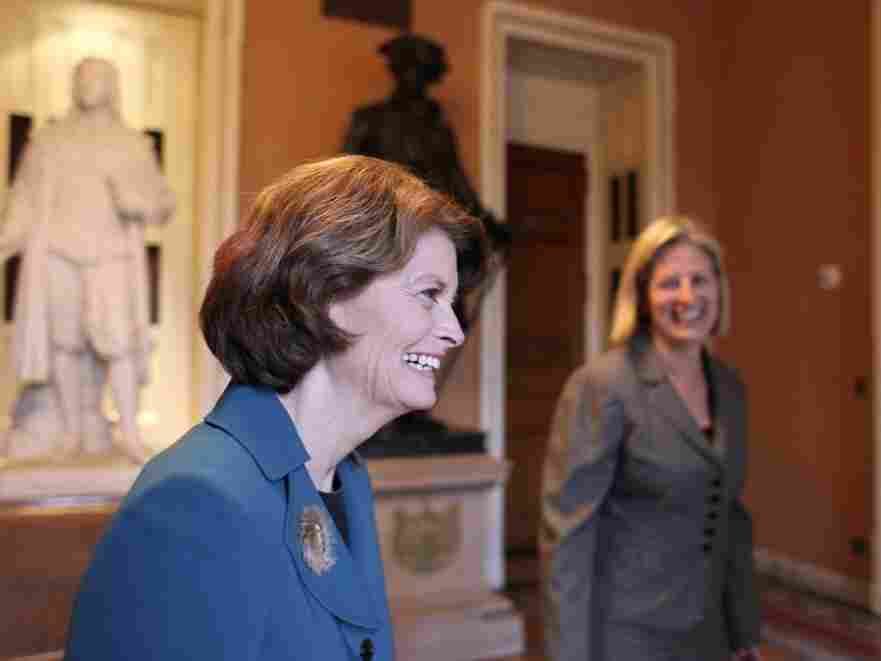 Alaska's Republican Sen. Lisa Murkowski has surpassed fellow Republican Joe Miller in the vote count in her write-in bid to remain in the U.S. Senate.

The latest reports are that Murkowski leads Miller, the Republican nominee, by 1,706 votes, with Murkowski being credited with 92,164 write-in votes and Miller getting 90,458, according to the Anchorage Daily News.

Murkowski's lead is expected to grow. There are still more than 8,000 write-in ballots to review and she has been getting the write-ins at about a 97 percent rate.

So it seems reasonable to assume it's over, though Murkowski, who returned to Capitol Hill Monday for the lame-duck session, said she had not yet tasted the champagne of victory in what's increasingly looking like a successful long-shot, write-in bid.

But she's not the only one unwilling to say publicly that the race isn't over. Miller's campaign is essentially saying the same thing.

The campaign of Tea Party movement favorite Miller seems to be placing its hopes in its own long-shot, getting a favorable federal court ruling that would invalidate many of the votes, something voting law experts think is highly unlikely.

... Miller spokesman Randy DeSoto said he still thinks the court challenge could get enough votes thrown out for Miller to win.

"The race is far from over," DeSoto said.