Accessibility links
Sen. Bernie Sanders 'Filibusters' Tax Cut Deal : It's All Politics Sanders wants changes in the tax cut deal that would reduce or eliminate tax cuts to the wealthy. His old-style filibuster gives opponents of the compromise a chance to air their grievances and get them into the Congressional Record. 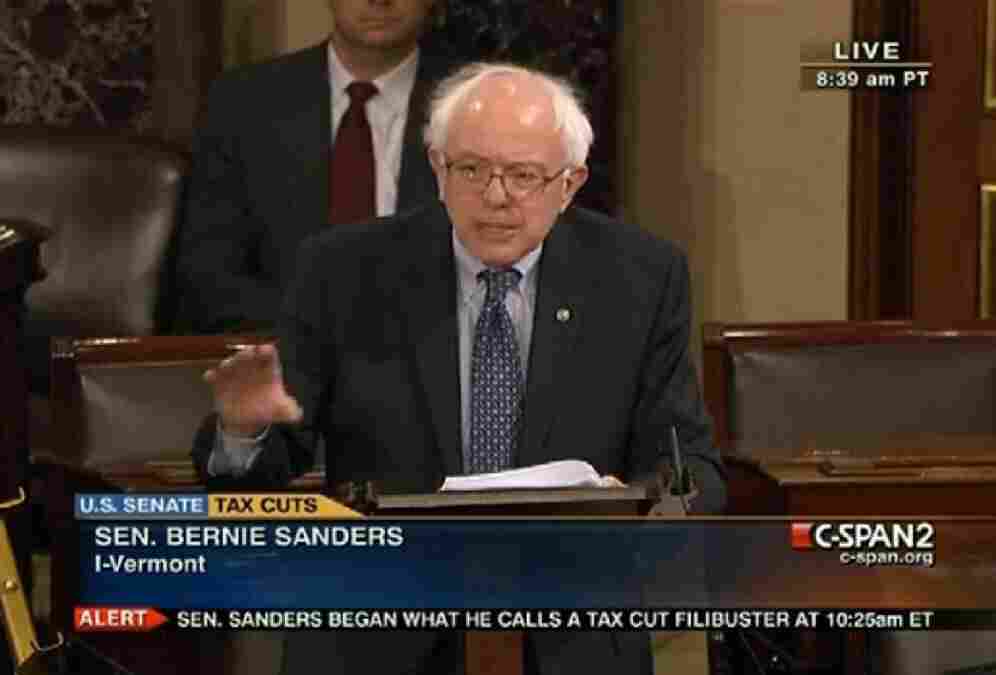 If you want to see an old-style Senate filibuster, check out C-SPAN.org.

Sen. Bernie Sanders, the Vermont independent who conferences with Senate Democrats, launched a filibuster at 10:30 a.m. Friday against President Obama's tax cut compromise with congressional Republicans. He shows no sign of letting up. He has vowed to go as long as he can.

He's getting occasional help from other senators. Democrats Sherrod Brown of Ohio and Mary Landrieux of Louisiana have come to the floor to assist him. He also has a Twitter feed going where you can follow along.

Sanders has blasted the deal since it was announced earlier in the week because it extends the Bush-era tax cuts to all the income of the nation's wealthiest.

That extension, according to Sanders and many other liberals, is unfair to the less wealthy and it will do nothing to boost the economy.

More often than not these days, senators only threaten filibusters to force the Senate majority leader to find 60 votes to move the Senate's business forward. On controversial legislation, it's typically difficult if not impossible for Senate leadership to get 60 votes.

If Sanders' speech threatened to get in the way of the debate and vote on the tax cut legislation, Sen. Harry Reid would most likely get enough votes to get past Sanders, between the Senate Republicans and Democrats who would vote to end a filibuster.

But Reid's majority is about to become slimmer when five more Republican senators join the Senate in January.

So it makes a lot more sense for him to give Sanders and other unhappy Senate Democrats time to make their points for the TV cameras and Congressional Record since, in the new Congress, their votes become even more important to Reid.

Reid said he intends to bring the tax cut compromise up for a vote next week.