Accessibility links
New 'No Labels' Movement Seeks Bipartisanship : It's All Politics New bipartisan movement seeks to provide political cover to politicians willing to compromise. Political leaders and activists met in New York Monday to say the only way to solve the nation's problems is through using the best ideas from both sides. 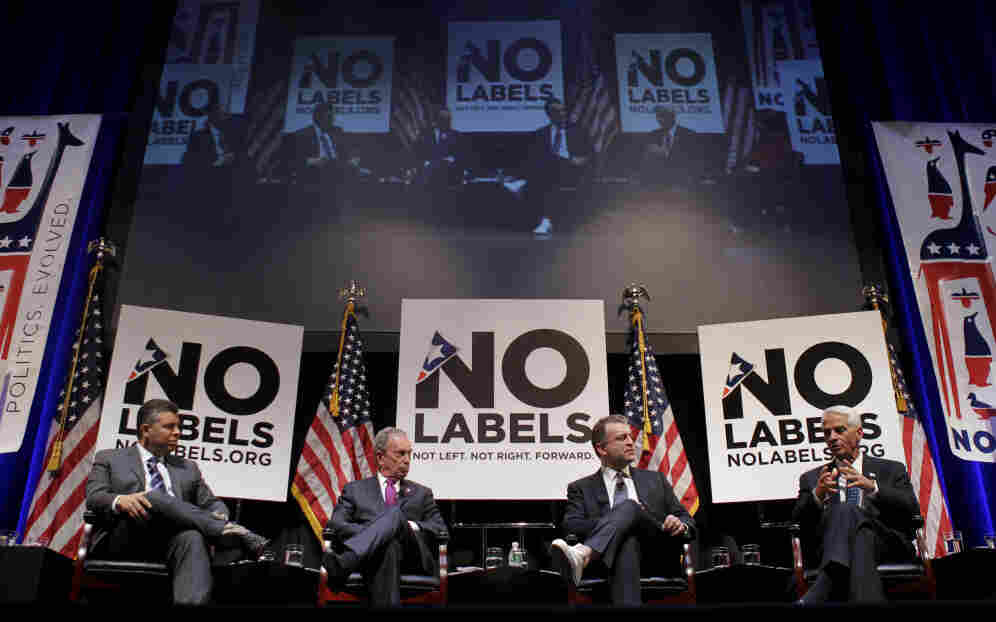 An organization whose founders aim to build a national movement to do the seemingly impossible -- wring out the partisan in politics -- held its organizing convention today in New York City with a lineup of high-profile supporters and a pledge to mobilize volunteers in every congressional district.

The "No Labels" gathering attracted more than 1,100, organizers said, including New York City Mayor Michael Bloomberg, who on Sunday again denied he has plans to mount a third-party 2012 presidential run.

(Bloomberg, a political independent, and the No Labels founders have vehemently denied that the new group has been assembled to pave the way for a Bloomberg White House campaign.)

"Our future is currently threatened by a range of unsustainable policies and a broken political system," said David Walker, one of the No Labels founders and former U.S. Comptroller General.

"We are here today," he said, "as founders of a new movement designed to shock that political system in order to get America back on track."

The goal is to recruit 1 million new members in 2011, establish chapters on 150 college campuses and in each of the nation's 435 congressional districts, and, of course, to raise money.

One of the movement's leaders, Jonathan Cowan, a former Clinton loyalist who heads the moderate Third Way think tank, said No Labels will use the organizational tools of the left and right to add a new voice of influence to the debate and to create a political-behavior watchdog corps of sorts.

"You will be monitoring and watching [elected officials] for the three C's," he told the assembled crowd. Do they reach across the aisle to co-sponsor legislation? Do they reach for common ground? Are they civil?

Politicians routinely hear from those on the right and on the left, he said.

"They never hear from all of you -- folks who have decided to set aside labels," Cowan said.

The new movement has already been criticized by pundits and analysts, largely on the right. (No Labels' "founding leaders" include Nancy Jacobson, a longtime Democratic activist and wife of Democratic pollster and Hillary Clinton campaign adviser Mark Penn; Kiki McLean, a former Clinton adviser and communications director of the Democratic National Committee; David Frum, a speechwriter for President George W. Bush and editor of the conservative FrumForum.com; and Mark McKinnon, a former adviser to Bush, GOP Sen. John McCain, and the late Texas Gov. Ann Richards, a Democrat.)

Conservative writer Jonah Goldberg, a familiar face on television and author of the 2008 book Liberal Fascism, in a recent column characterized No Labels as "undemocratic."

He argues that labels are useful in identifying a person's core views -- on taxes and foreign policy, for example. And that embedded in the new movement is the idea that their way is the best way, and others should just "shut up."

Bloomberg, who participated in a panel with Gov. Charlie Crist of Florida and Rep. Mike Castle of Delaware, both of whom lost in Republican primaries this year, appeared to agree to some extent, noting the resilience of the two-party system.

"It's not clear that the average person feels themselves disenfranchised or wants a lot of the things we're advocating," he said. "In the end, when you have an independent candidate it is the two major parties that get most of the votes."

But others who appeared during the day-long gathering suggested that it's not a new party that's needed, it's a counterbalance to the ideological extremes of the left and right, and to the flood of special interest money that turns politicians into puppets.

"We have to give political leaders permission to compromise," said former Rep. Tom Davis, a Virginia Republican. "We're going to add a voice to the middle -- the 'radical center,' if you will."

New York Sen. Kirsten Gillibrand said that people on both sides of the aisle are "measuring success by how many bills they block."

Davis and Gillibrand were among a lineup of elected officials -- current, former, and about-to-be former -- who participated in Monday's event.

There were those stepping down voluntarily, like Democratic Sen. Evan Bayh of Indiana.

And those who lost in party primaries or elections this past year -- including Florida's Crist, a former Republican, and GOP Rep. Castle.

Walker, the former comptroller, said that the first item on the No Labels agenda is to move the conversation on the condition of the nation's economy.

"The plain and simple truth is that, given the nature and size of our nation's fiscal challenge, everything will need to be on the table, including tough budget controls, social insurance reforms, defense and other spending cuts, and tax reform that will include increased revenues," he said. "The math just doesn't work to do otherwise."

"Those on the far left who say that we don't need to reform Social Security, Medicare, Medicaid and other social insurance programs are wrong and they don't have a credible plan to address our structural deficits," Walker said. "Those on the right who say that we can close our federal financial hole without additional revenues are also wrong. They too don't have a credible plan to put us on a prudent and sustainable path."

Organizers predicted that by this time next year, No Labels early adopters will be able to look back at this time as the beginnings of what Cowan predicted would become "one of the most powerful political movements in the United States."

A movement, organizers note, not a party.