Accessibility links
Ending Military's Gay Ban Lets Obama Fulfill Another Clinton Promise : It's All Politics The Senate voted 65 to 31 on Saturday to overturn the ban on gays serving openly in the military. What had begun as an effort to change attitudes became a symbol of the difficulty in doing just that.﻿ 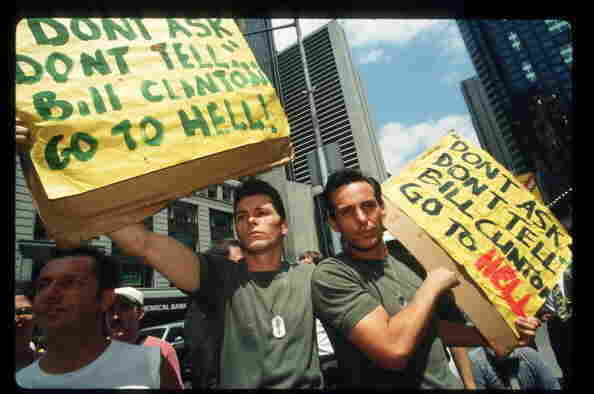 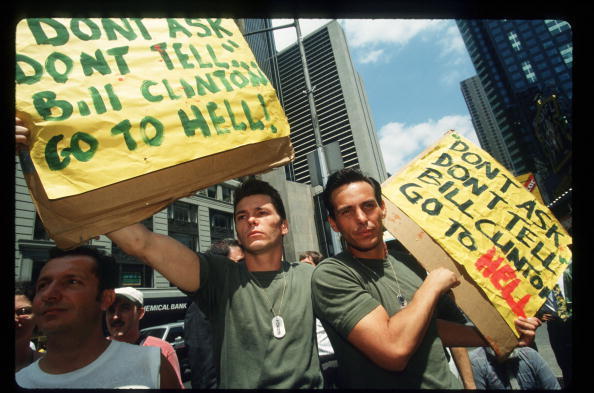 At a 1993 demonstration in New York, gay rights advocates voiced their opposition to the military policy that became "don't ask, don't tell."

Nearly two decades ago, President Bill Clinton ignited the first of the firestorms that would define his presidency by announcing an end to the ban on gays and lesbians in the military.

Today, 18 years later, the U.S. Senate has completed work on a bill by which gays and lesbians will soon be able to serve openly in all branches of the U.S. armed forces.

So the standing of gays in the military becomes the latest issue on which the agenda and fate of the last two Democratic presidents seem to be inextricably linked. As with the health care bill earlier this year, it would be fitting for the former president to be present at the signing ceremony, which should take place next week.

We have come to refer to this particular milestone in American social history as the repeal of the "don't ask, don't tell" policy. It may be a curiously inverted term for the debate, but it harks back to the last time the issue consumed Washington and tells us a lot about how change happens.

Back in 1992, Clinton had promised several prominent backers he would overturn the longstanding military prohibition on homosexuality, and he tried to deliver on that promise immediately. He thought Congress and the country would go along because he had spoken of changing the policy in his campaign.

He was wrong. Resistance arose immediately within the military and among social conservatives, and Clinton soon found many in his own party deserting him in Congress. He was forced to fall back on a compromise.

The compromise had two parts. First, the military would stop trying to discover and discharge gays and lesbians. Second, those who let their orientation be known would still be subject to dismissal.

The policy was called "don't ask, don't tell." It pleased no one, but it let everyone move on. That is, after all, the essential function of a compromise. Congress codified it in 1993.

A Change That Wouldn't Come Quickly

Over the years, the policy, sometimes shorthanded as "DADT," made no new friends. Those who wanted homosexuality banned in the services rankled at the DADT restraints, while the gay community saw the enforced concealment as inherently shaming and discriminatory.

More than 13,500 active service members have been discharged under the provisions of this law. But beyond that, it has come to represent the persistence of gay closeting in the culture writ large. What had begun as an effort to change attitudes became a symbol of the difficulty in doing just that.

Clinton had thought he could make the break by imitating President Harry Truman, who had stunned much of the country in 1948 by ordering an end to racial segregation in the armed forces. Truman did it by fiat, simply ordering the military to integrate "as quickly as possible." Officially, the Pentagon saluted and complied. In reality, the process was labored and took years.

Still, Clinton thought the Truman model would work for him. He reasoned that the existence of gays and lesbians in the ranks was an open secret in the military and in the society in general. He thought he was not so much altering a reality as repealing a hypocrisy. But that sort of thing can get a president in trouble, too.

Saturday's vote will be called a victory for President Obama, and indeed he can take great satisfaction in completing the policy change Clinton set in motion almost a generation ago.

The climate for this issue has warmed considerably in the interim, thanks to a long campaign by gay activists and civil rights groups and by moderating attitudes in the public and within the uniformed services -- as measured in recent surveys.

On the same day the Senate took a step toward repealing DADT, it failed to break another filibuster threat against the DREAM Act. This is a bill allowing the children of people who entered the U.S. illegally to earn citizenship if they go to college or serve in military.

The DREAM Act was at one time a bipartisan measure, and indeed it has attracted a smattering of GOP support thist time around. But in the Senate it had a majority of only 55, so it was hostage to the same tactical game by which the minority party maintains much of the power to run the Senate -- the "virtual filibuster" that requires 60 votes to do anything.

It took nearly a generation to muster this many votes for gays in the military. How long will it take to find that many for the next meaningful change in the immigration laws?