Accessibility links
Obama Calls On Nation To Live Up To A Child's Ideals : It's All Politics In a dramatic moment, the president was able to do one more thing that wasn't part of the prepared speech: He delivered to the nation the news that Rep. Gabrielle Giffords opened her eyes for the first time since the shooting. The news drew cheers.

Obama Calls On Nation To Live Up To A Child's Ideals

Obama Calls On Nation To Live Up To A Child's Ideals 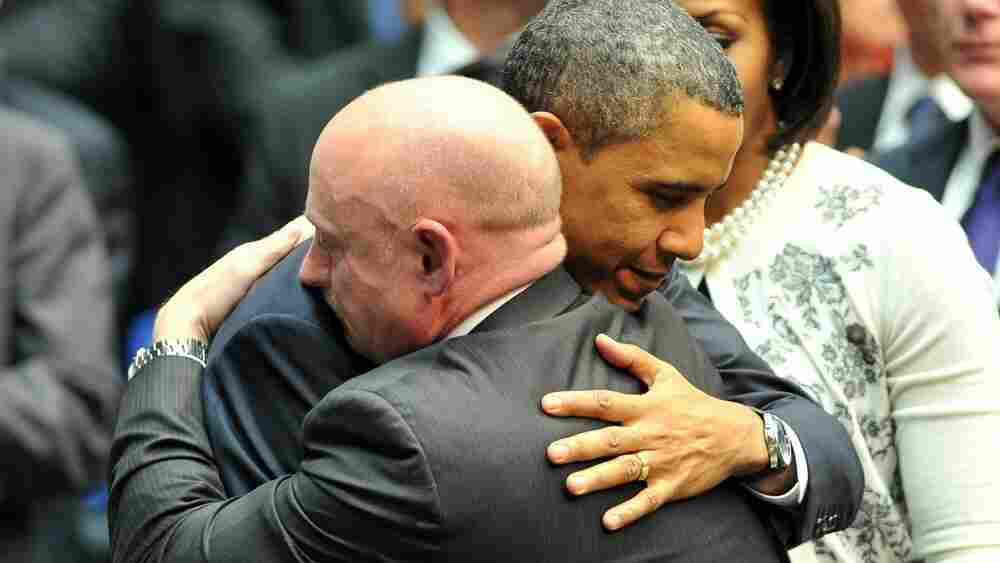 To praise those who are gone. To comfort their survivors. To encourage the wounded and their families. To inspire the nation to move beyond the immediate tragedy and to live rededicated  lives so the dead won’t have died in vain.

Such are the tasks of a president at a memorial service meant to help the nation deal with its grief. In his speech in Tucson Wednesday evening, the president did all these things. Indeed, all of that was in the version of the president’s speech distributed to journalists at the start of the ceremony.

But he was able to do one more thing that wasn’t part of the prepared speech. He delivered to the nation the good news that on Wednesday just after he and the first lady left her hospital room, Rep. Gabrielle Giffords opened her eyes for the first time since the shooting.

That news provided the best, most unexpected moment of the speech and was appropriately greeted with a standing ovation as Mark Kelly, Giffords’ astronaut husband stood and acknowledge the huge audience at the University of Arizona arena.

It was also an element that made the speech different than some of the other presidential speeches after national tragedies that pundits thought could be models for Obama's speech - President Ronald Reagan's speech after the Challenger accident or President Bill Clinton's after the Oklahoma City bombing.

In a speech that White House aides said the president worked on late into night, Obama also didn’t shy away from the partisan controversy that has raged ever since the shootings Saturday. Without getting into too much detail, he urged the nation not to use the shootings to score political points.

“But what we can’t do is use this tragedy as one more occasion to turn on one another.  As we discuss these issues, let each of us do so with a good dose of humility.  Rather than pointing fingers or assigning blame, let us use this occasion to expand our moral imaginations, to listen to each other more carefully, to sharpen our instincts for empathy, and remind ourselves of all the ways our hopes and dreams are bound together.”

At another point, he flatly rejected the argument that the mass shooting was caused by the often angry rhetoric in the political debate.

And if, as has been discussed in recent days, their deaths help usher in more civility in our public discourse, let’s remember that it is not because a simple lack of civility caused this tragedy -- it did not -- but rather because only a more civil and honest public discourse can help us face up to our challenges as a nation, in a way that would make them proud.

The words “it did not” wasn’t in the speech as written. The president added it so no one could mistake his point. By being so emphatic, perhaps the president hoped to put an end to the raging argument over what role heated rhetoric played in the shooting.

Because there were, mercifully, only six dead, the president was able to linger over each of them for a while: U.S. Judge John Roll, the hardest-working jurist in the Ninth Circuit. Gabe Zimmerman, a congressional aide with a passion for helping people. Dorothy “Dot” Morris, who died as her husband of 50 years tried to shield her. Dorwan Stoddard, another senior who helped maintain his church and who died as he also protected his wife with his body. Phyllis Schenck, a snowbird from New Jersey, a gifted quilter and a Republican who liked Gabby, as the congresswoman is known.

Then there was the Christina Taylor Green, age 9. Little Christina, as most everyone probably knows by now, was the grade schooler who had gone with a neighbor to the shopping center where the shooting occurred because she was interested in politics, having been elected to her school’s student council.

Because of her age, her innocence, her death has seemed to many the unkindest cut of all.

Knowing this, the president lavished the most time on her and she became a vehicle for a larger point. How best to live up to the trust and ideals of this lost child? the president asked. He had an answer.

“Imagine: here was a young girl who was just becoming aware of our democracy; just beginning to understand the obligations of citizenship; just starting to glimpse the fact that someday she too might play a part in shaping her nation’s future.  She had been elected to her student council; she saw public service as something exciting, something hopeful.  She was off to meet her congresswoman, someone she was sure was good and important and might be a role model.  She saw all this through the eyes of a child, undimmed by the cynicism or vitriol that we adults all too often just take for granted.

I want us to live up to her expectations.  I want our democracy to be as good as she imagined it.  All of us – we should do everything we can to make sure this country lives up to our children’s expectations.”

That message - let’s do it for our children - is one that’s difficult to argue with. He seemed to say our better angels are our children and we shouldn't disappoint them.

In a speech whose larger purpose was to offer a unifying vision to the nation, it was certainly one that everyone should be able to agree on.