It's All Politics: Tragedy in Tucson

Today marks the return of Political Junkie as a weekly (or possibly twice-weekly) column after two years of it being a daily blog.  You can find all previous columns (2004-2008) here.  Please send your thoughts, suggestions and comments about this new/old format to politicaljunkie@npr.org

This week:  Sen. Conrad announces retirement in North Dakota ... the 25 most influential black leaders in U.S. history ... a look at New York attorneys general ... plus, the latest podcast.

Today's announcement by Sen. Kent Conrad (D-N.D.) that he will not seek re-election next year is the second such declaration in the past two weeks; earlier, Kay Bailey Hutchison (R-Texas) said she too plans to retire after 2012.

But on balance, even though it's one departure for each party, it's a net gain for the GOP.  For all the talk about how demographic changes in the Lone Star State are going to be advantageous to the Democrats, it just hasn't happened yet.  Bill White, the Democrat who was supposed to give GOP Gov. Rick Perry a run for his money in last year's gubernatorial contest, barely broke 40 percent of the vote.  And there is no shortage of Republicans currently holding statewide office, such as Secretary of State Roger Williams (already endorsed by the first President Bush), Railroad Commissioners Michael Williams & Elizabeth Ames Jones and Lt. Gov. David Dewhurst, who are itching to run.

Conrad's decision, on the other hand, seems to be bad news for the Dems.  Last year, two thirds of the state's Democratic congressional delegation lost out to the GOP; the seat of retiring Sen. Byron Dorgan (D) went to Republican Gov. John Hoeven (with an astounding 76 percent of the vote), and nine-term Democratic Rep. Earl Pomeroy got walloped by Republican challenger Rick Berg.  And while North Dakota always goes Republican in presidential years, no Republican had won a Senate seat there since 1980.

Unlike with Dorgan, who some people said bowed out because he feared a race against Hoeven -- for the record, I'm not sure if that was truly the reason -- no big-name Republican has even been talked about as a Conrad challenger.  The 62-year old Conrad, first elected to the Senate in 1986, chairs the Budget Committee and has been active in the debate over how to handle the nation's economic woes.  But when he came out in favor of the recommendations proposed by President Obama's deficit commission -- which called for tax increases -- speculation rose that he was going to retire.

Democrats mentioned as possible candidates include Pomeroy and former state Attorney General Heidi Heitkamp, who lost a gov. race to Hoeven in 2000.  (However, Pomeroy "appeared to rule out a 2012 bid Tuesday," telling Politico, "I’m about two weeks into a new job. I’ve changed course and I’m not looking back."

Public Service Commissioner Brian Kalk, a Republican, had already set up an exploratory committee; other Republicans may now start to look at the seat, including ex-Gov. Ed Schafer, who was agriculture secretary in the George W. Bush Cabinet.  Schafer had previously considered a Senate bid against Dorgan in 2004.

There were many Senate retirements in the 2010 Senate election cycle but they adversely affected Democrats much more than Republicans.  The GOP had to defend seven open seats -- in Florida, Kansas, Kentucky, Missouri, New Hampshire, Ohio and Utah -- but won them all.  Democrats, on the other hand, lost four of its seven open seats -- in Illinois, Indiana, North Dakota and Pennsylvania.

There doesn't seem to be a lengthy list of potential Democratic retirements for the 2012 cycle -- Virginia's Jim Webb has been mentioned, though I think he's running -- but it's still early.  And while the numbers clearly help the GOP -- of the 33 seats up, 23 are held by the Democrats (including the two independents) and 10 by the Republicans -- both parties have concerns.

For the Democrats, there are many Republicans ready to challenge Bill Nelson in Florida and Ben Nelson in Nebraska.  Claire McCaskill could face a rematch with the Republican she ousted in 2006, Jim Talent, but Talent may face a primary with former state Treasurer Sarah Steelman.  Webb, should he run, may also face a rematch with ex-Sen. George Allen (R) in a political environment far different than what existed in 2006.

And in Connecticut, former Secretary of State Susan Bysiewicz (D) announced today that she's running for the seat held by Joe Lieberman, one of the two independents.  Lieberman, should he run again, will likely do so, again, as an independent.

But Republicans have their worries too.  Maine's Olympia Snowe, a moderate, is all but assured of facing a Tea Party challenger in the primary.  (Utah's Orrin Hatch may have the same kind of challenge, but the GOP will keep the seat in Utah no matter what happens; Maine is a different story entirely.)  And while Scott Brown remains highly popular in Massachusetts, Democrats insist that they won't "pull another Coakley" with their nominee.

And who knows what's going to be with John Ensign in Nevada.

Q:  Everyone is saying that the GOP picked up 63 House seats on November 2.  But since going into the election they had 178 seats, and now they have 242, shouldn't the total be 64 seats?  I know Mark Souder's seat was vacant, as was the New York seat of Eric Massa.  Please don't say that, well, we just ascribe the Souder and [vacant upstate New York Democratic] Eric Massa seats to the parties that held them prior to their respective resignations.  When someone resigns (or dies or is expelled), his party automatically loses that seat that day. -- David Ray, Annandale, Va.

A:  Your math is correct: 242 minus 178 is indeed 64.  But, as you guessed, they don't count Souder's (R-Ind. 03) open seat as a GOP pickup because it was theirs to begin with, even if it was vacant.  I have not seen anyone else making the case that Republicans should be credited with a gain in the Indiana seat.

Q:  I notice that our last two elected governors, Eliot Spitzer and now Andrew Cuomo, were attorneys general prior to their election.  Has being attorney general been a steppingstone to the New York governorship? -- Debbie King, Rochester, N.Y.

A:  Some have attempted to use it as a launching pad for higher office, with mixed results.  Robert Abrams, a Democrat who was elected four times (1979-93), was his party's Senate nominee in 1992 but was defeated by Republican incumbent Al D'Amato.  Another Democrat, John Bennett, ran for governor in 1942 but lost to Thomas Dewey (R).  Albert Ottinger, a Republican, also sought the governorship, in 1928, but lost to the Democratic nominee, Franklin D. Roosevelt.  Another Republican attorney general, Merton Lewis, ran for governor in 1918 but lost the primary to GOP incumbent Charles Whitman.

One of the biggest successes of a New York attorney general moving up was Jacob Javits.  Elected AG in 1954 -- defeating Franklin D. Roosevelt Jr. in the process -- he decided to run for the Senate two years later for the seat vacated by Herbert Lehman (D).  Javits won and served four terms.

It's All Politics: The latest episode of our weekly podcast, focusing on the tragedy in Tucson, can be heard here:

It's All Politics: Tragedy in Tucson 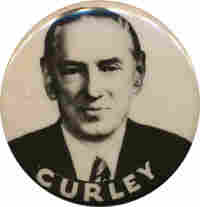 This Day In Political History: Boston Mayor James Michael Curley, shortly after re-election to an unprecedented fourth term, is convicted of mail fraud.  He will spend five months in prison before his sentence is commuted by President Truman (Jan. 18, 1946).