Accessibility links
Michele Bachmann Preaches To Tea Party Choir : It's All Politics Bachmann listed the Tea Party's standard bill of particulars against Obama, then got Iwo Jima wrong. She said the U.S. prevailed against Japan on the island against all odds which is not true. 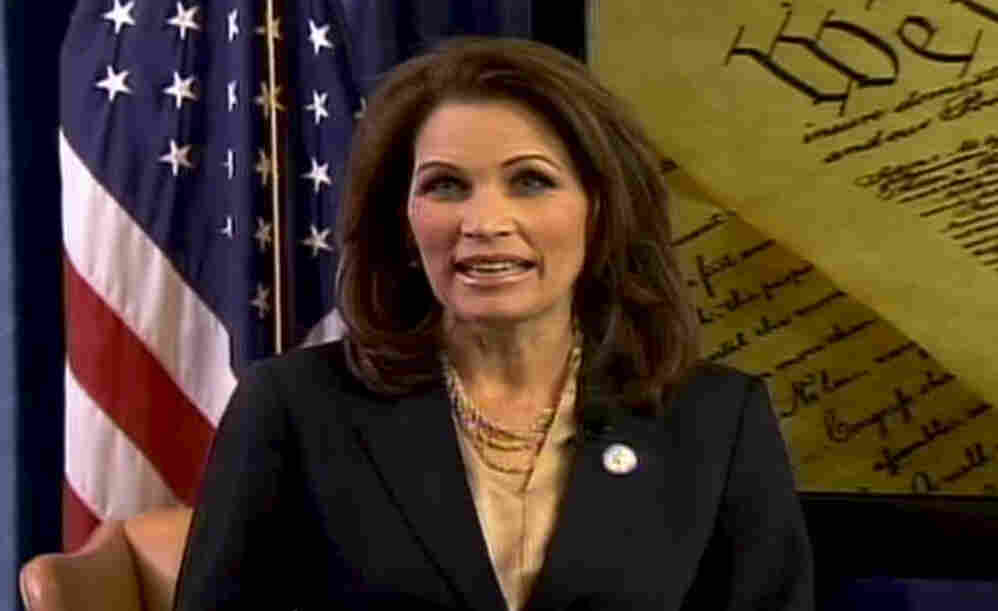 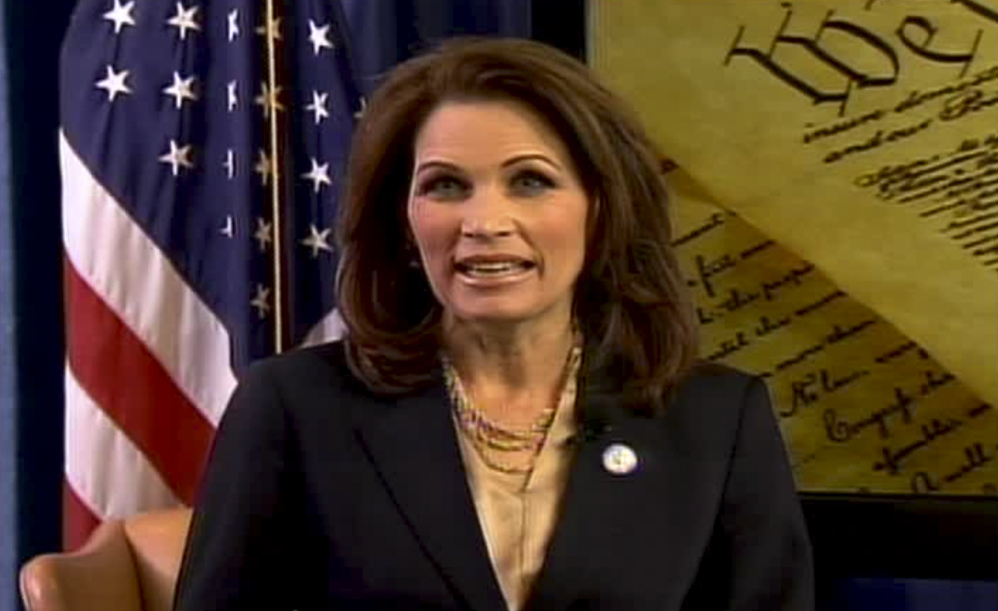 It would be interesting to learn if Rep. Michele Bachman made any converts to the Tea Party movement.

Because making people take a second look at the Tea Party movement didn't seem to be the main point of her response to President Obama's State of the Union address.

Instead, she seemed to be preaching to the choir with her several references to "Obamacare" and her recitation of the whole bill of particulars that Tea Party adherents have directed at the president for more than a year.

There was a certain oddness to Bachmann's performance.

First, we had just seen a Republican rebuttal by Rep. Paul Ryan of Wisconsin, chairman of the House Budget Committee before she came on. So it had the feeling of not just being opposed to Obama but in a way pushing back against GOP mainliners, too.

Then there was the whole thing of her looking away from the camera providing video to CNN.

It looked as though she was reading a TelePrompTer off to the side. But she was actually looking into the Tea Party Express camera supplying its live stream.

Bachmann blamed the president for the high jobless rate and, evoking Ross Perot, used a chart to show that unemployment had topped out over 10 percent during Obama's first two years despite his having "promised" that the stimulus would keep the jobless rate from surpassing 8 percent.

Ever since that bad forecast by Obama Administration economists, Republicans have pummeled the administration over what was essentially a guesstimate.

While Obama's message was that the parties needed to find ways to work together to solve the nation's problems, and while Ryan said he hoped for common ground, too, Bachmann's message wanted nothing less than complete capitulation from Obama.

For two years President Obama made promises just like the ones we
heard him make this evening. Yet still we have high unemployment,
devalued housing prices, and the cost of gasoline is skyrocketing.

Well, here's a few gestions — suggestions for fixing our
economy. The president could stop the EPA from imposing a job-
destroying cap-and-trade system. The president could support a
balanced budget amendment. The president could agree to an energy policy that increases American energy production and reduces our dependence on foreign oil. The president could also turn back some of the 132 regulations put in place in the last two years, many of which will cost our economy $100 million or more. And the president should repeal "Obamacare" and support free market solutions, like medical malpractice reform and allowing all Americans to buy any health care policy they like anywhere in the United States.

We need to start making things again in this country, and we can
do that by reducing the tax and regulatory burden on job creators.

America will have the highest corporate tax rate in the world.
Think about that. Look no further to see why jobs are moving
overseas.

But thanks to you, there's reason for all of us to have hope that
real spunding — spending cuts are coming, because last November you went to the polls and you voted out the big-spending politicians and you put in their place great men and women with a commitment to follow our Constitution and cut the size of government.

I believe that we're in the very early days of a history-making
turn in America.

Various images were on a screen behind Bachmann at various times of her presentation. There was a picture of the Constitution that appeared repeatedly, a visual reference to the Tea Party's constitutional fundamentalism.

At one point, a photo of Iwo Jima flashed on the screen when Bachmann referred to the famous World War II battle that happened on that Pacific island to make a point.

Unfortunately, her point was based on faulty information.

Bachmann cited Iwo Jima as "a battle against all odds."

Uhhh, actually no. While the fight to subdue Japanese soldiers on Iwo Jima was among the bloodiest fighting of the war, especially for the Marine Corps, the odds were very much on the U.S. side.

The battle for the island took a heavy toll, killing nearly 6,000 Marines. But the heaviest odds were against the Japanese who had orders to wage a last-ditch fight to the death and did.