Accessibility links
Rumsfeld Offers No Apologies For War Decisions : It's All Politics In an interview with NPR, former Defense Secretary Donald Rumsfeld suggested others were more responsible for mistakes he has long been blamed for — from the failure to deploy enough U.S. troops to capture Osama bin Laden in Afghanistan, to committing too few troops to Iraq. 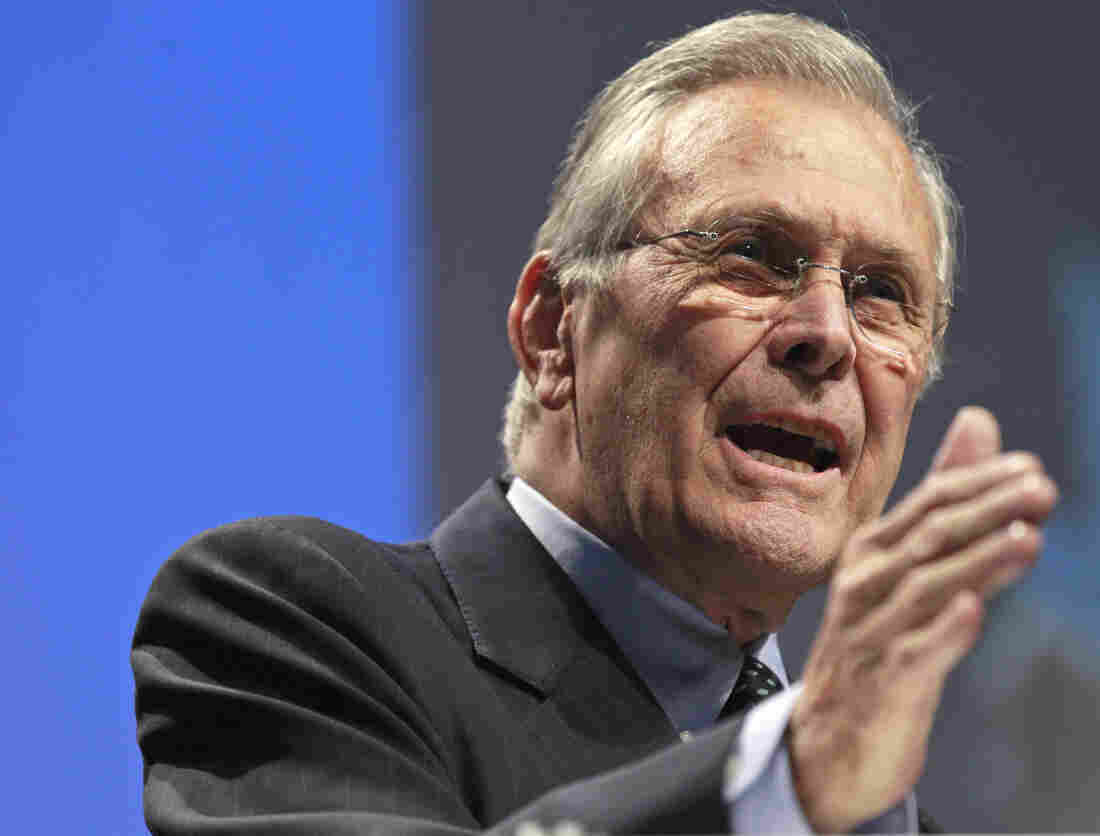 As Donald Rumsfeld might say, there are known knowns and known unknowns. And one known known is that the passage of time doesn't appear to have mellowed Rumsfeld.

In an interview with NPR's Steve Inskeep, the former Bush administration defense secretary was as feisty as ever. He challenged the premises of questions. And he suggested that others were more responsible for U.S. war policy decisions in Afghanistan and Iraq that are now widely viewed as mistakes — mistakes for which he has long been blamed.

The interview, part of his book tour for his new memoir Known and Unknown, wasn't the sort to make critics of the 78-year-old Rumsfeld view him in a new light.

Inskeep asked Rumsfeld why, in 2001, after the invasion of Afghanistan, the U.S. didn't deploy more of its troops to close Osama bin Laden's escape route from Tora Bora, instead of relying on Afghan forces.

RUMSFELD: Now, wait a second. There were not just Afghans. There were American forces involved. Special forces, CIA people.

INSKEEP: You say that that was valid to leave that decision to the commander.

RUMSFELD: I agreed with his decision.

INSKEEP: But at the same time, you were a secretary of defense who quite aggressively asked questions and took great pride in challenging people, asking them questions, questioning their assumptions. Did there ever come a time when you questioned Gen. (Tommy) Franks' assumptions in leaving American forces largely out of the picture in trying to close off the exits from Tora Bora?

Rumsfeld indicated that while U.S. personnel weren't at Tora Bora in large numbers, an awe-inspiring amount of U.S. ordnance was used there.

In short, he appeared to be clinging to the so-called Rumsfeld Doctrine of relying on air power instead of ground forces. More than a few defense analysts have discredited that strategy.

Rumsfeld called the notion that more U.S. troops would have improved the chances of capturing bin Laden "speculation."

As defense secretary, Rumsfeld had a reputation for paying close attention to details. But he portrayed himself as leaving critical decisions to subordinates.

For instance, he said it was J. Paul Bremer, the U.S. proconsul who ran Iraq after Saddam Hussein's regime fell, who ordered the disbanding of the Iraqi military. Bremer has said he was only following orders from Rumsfeld subordinate Douglas Feith.

RUMSFELD: I don't recall it. But certainly, as secretary of defense, I'm responsible for what takes place in the department.

Inskeep also asked Rumsfeld about troop levels in Iraq, which many experts have for years said were too low to ensure stability in that nation after the U.S. invasion.

Rumsfeld has been blamed for believing too much in his own doctrine and failing to supply the troop numbers that could have kept Iraq from falling into chaos. The military surge of 2007 was meant to reverse that mistake.

But Rumsfeld said that was another area where Inskeep was not providing an "accurate characterization." A war plan was developed up the ranks that had the potential for as many as 400,000 U.S. troops to be deployed, Rumsfeld said.

But it was Franks and other generals who decided they could fight the war with fewer troops, said Rumsfeld, who depicts himself as more of a rubber stamp.

INSKEEP: Didn't you challenge the planners, right down to very small units, about whether this or that unit was needed?

Rumsfeld: No... I can't remember any specific small units I got involved with but one, and I think the documents on Rumsfeld.com will show this...

Rumsfeld said he got the Germans to provide a security unit to protect some assets in a country in the region to spare a U.S. unit from that duty.

Nearly eight years after the U.S. invasion of Iraq, questions persist about whether the conflict was destined to follow the election of President George W. Bush, because Hussein was seen as unfinished business from the administration of the first President Bush.

If that were true for some, Rumsfeld said, it wasn't for him.

INSKEEP: Did you go into your tenure as secretary of defense believing that war with Iraq was coming?

INSKEEP: Not that you were determined to cause it. I'm not asking that. But just that you believed that war was coming?