Accessibility links
In Ohio, Some GOP Lawmakers Question Bill To Limit Union Rights : It's All Politics Union protesters in Ohio chafed at the state police limiting how many could enter the state house. Meanwhile, some Republican lawmakers questioned GOP introduced legislation that would rein in collective bargaining. 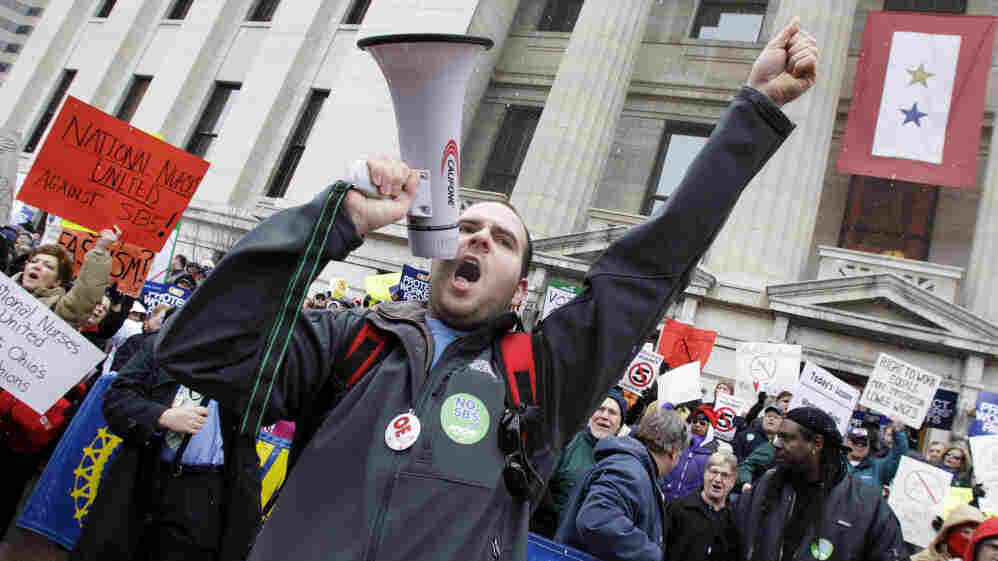 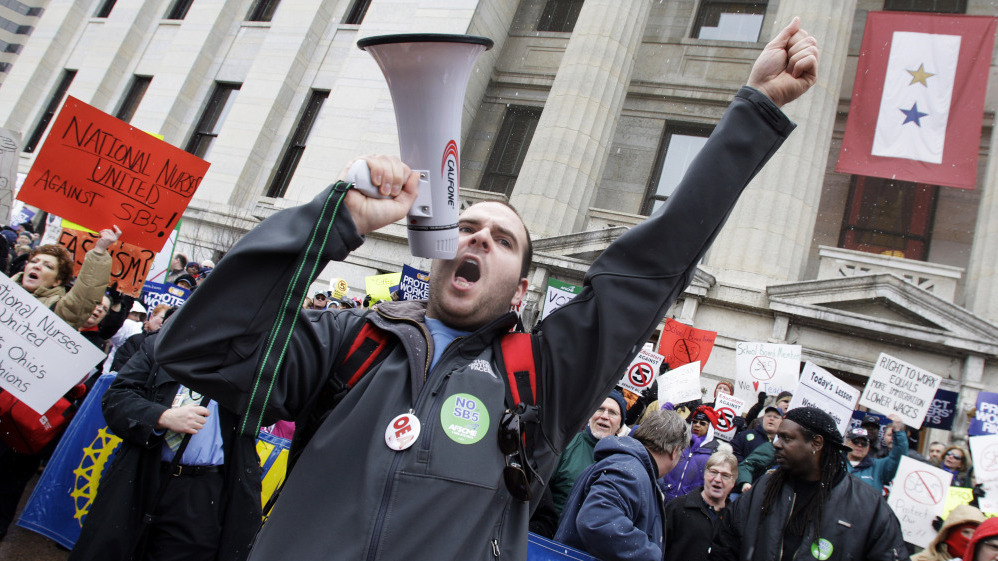 Ohio's state house has been besieged by union protesters just like in Wisconsin.

The Buckeye State demonstrators have been roused by a legislative effort by the Republican Gov. John Kasich and GOP lawmakers to rein in the collective bargaining rights of unions that represent public workers, similar in theme if not every detail to what's occurring in Wisconsin.

Adding to the ire of Ohio's demonstrators are state police restrictions on the numbers of protesters allowed into the state capitol building for safety reasons, state officials there are saying.

Fearing for the safety of the hundreds already gathered in the Statehouse, the patrol locked outside doors, leaving throngs of protesters on the east side along Third Street chanting and cheering so loud that they could be heard across Downtown.

"My taxes pay for this and I should be allowed in," said Diane Twarog, a representative for the Service Employees International Union, who made the trip with her niece and nephew from St. Clairsville.

Legislative Democrats said this afternoon they are seeking an injunction to force Statehouse officials and the Ohio Highway Patrol to open the doors and allow more people in.

An interesting aspect of the Ohio situation is that some Republican lawmakers question the wisdom of the Senate bill which would effectively neuter the unions.

Some conservatives view what the governor and other Republicans propose as a violation of contract rights. (Some liberals have been saying as much on the Internet, as well.)

For many conservatives, this is no little thing since the notion that the Constitution protects the parties in a contract from government interference extends back to the nation's very beginnings.

Sen. Timothy J. Grendell, R-Chesterland, questioned how much protection civil service would provide. He said the bill could end up costing the state money and should scare conservatives worried about private contracting rights.

"Even if you say these are publicly granted contracts so the government has more leeway, you're opening up a Pandora's Box to the principle that government can interfere with private contract rights when it suits government's purpose," Grendell said. "If you're a conservative or a tea party person, you should be greatly concerned about that concept because today's collective bargaining agreement could be tomorrow's private business contract."

Grendell said he favors some changes to collective bargaining limiting binding arbitration rulings under a new formula and making teachers re-earn their tenure but he thinks the bill goes too far. Eliminating collective bargaining for state workers as a way to establish a grievance process to settle disputes over terminations or other workplace issues would be replaced by lawsuits.