Accessibility links
Public Unions In Wisconsin, Elsewhere Are Scapegoats: Expert : It's All Politics University of Toledo law professor Joseph Slater also notes public-worker unions were once so embraced by public officials that officials dealt with them even though there was no legal requirement to do so. 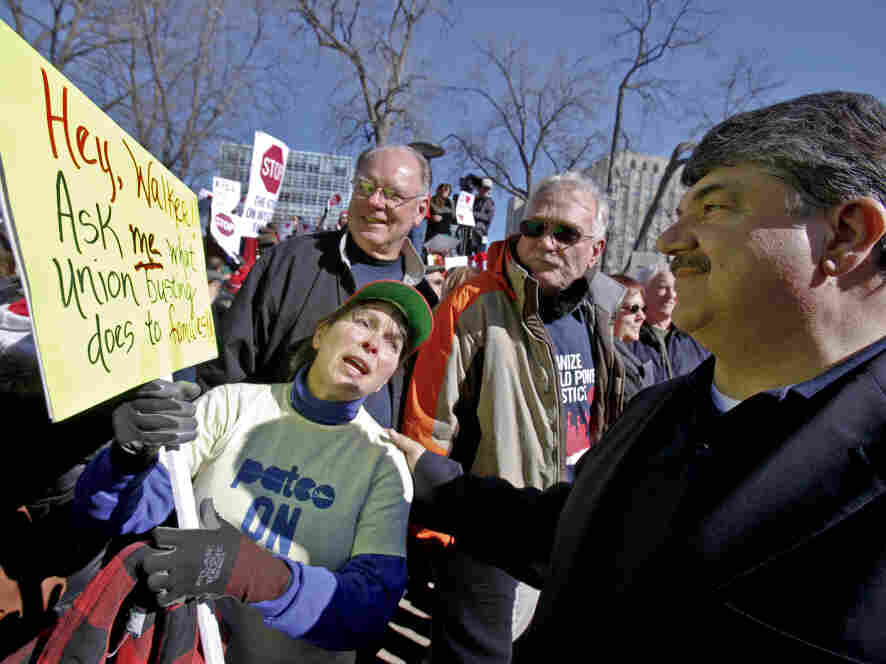 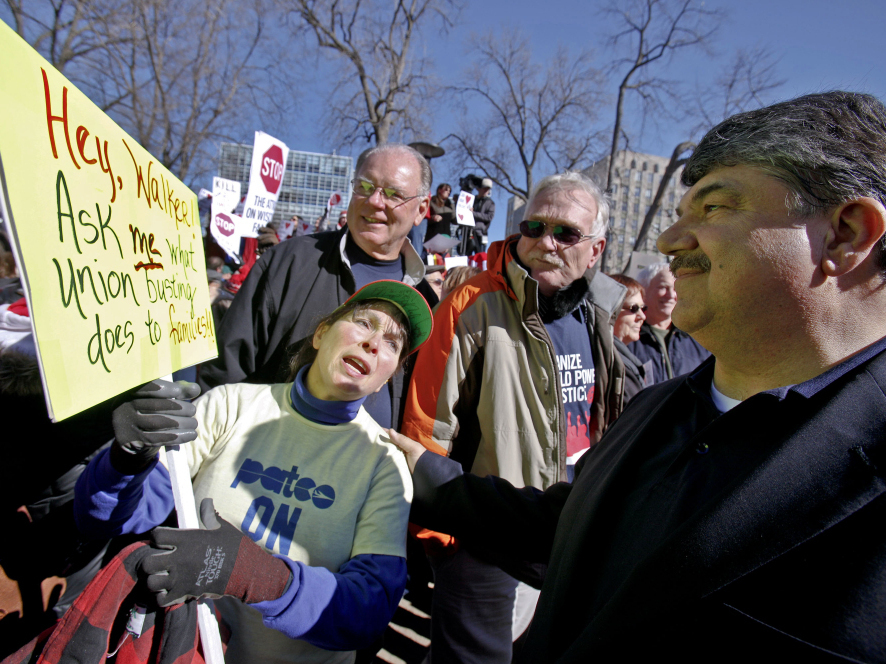 Love them or hate them, public-employee unions are certainly at the center of the policy wars across the nation as Republican governors and lawmakers argue that addressing their states' fiscal woes means reining in organized labor.

While unions in Wisconsin and elsewhere are being portrayed as obstacles to sound management, they weren't always seen as the problem. Sometimes they were seen as the solution.

Slater found that decades ago, public employee unions were so welcomed, state and local officials would work with them even though there was no requirement they do so.

SLATER: Yes, when I was studying the history of this, this was one of the fascinating things that I found. Because I think that there's often an assumption that "well, if you don't have a formal legal right to do something, no one can be doing it."

But in fact, all over the country, in Wisconsin and New York and Illinois, public sector unions would organize and work informal arrangements. And employers must've thought that was a good idea because they were doing it without any legal obligation to do it.

In Wisconsin as elsewhere, unions are now the whipping boys of conservative politicians who blame them for helping to drive states to fiscal ruin.

But Slater disputes this. He sees the unions being use more as scapegoats:

SLATER: I don't think there's any evidence to support the contention that unions are causing the budget crises that are being used, I would say, to try to take away collective bargaining rights.

Study after study show that public sector workers are, if anything, paid less than private sector workers. There's studies on that, specifically on Wisconsin workers. As to pensions which are also often cited as a problem for budgets, in the vast majority of jurisdictions, including Ohio or Wisconsin, most or all rules about pensions and pension benefits are not subject to collective bargaining. Instead, they're set by statute.

Steve asked Slater about the contention by Wisconsin Gov. Scott Walker and others that public-employee unions create inefficiencies because they slow the speed with which management can respond to changing fiscal circumstances.

Slater didn't accept this either:

Well, I wouldn't say they add restrictions that are necessarily negative. You do have some work rules but the idea with collective bargaining laws is that the workers have some input. And there have been a series of studies on whether unions, public sector, private sector, decrease efficiency.

I think the collective wisdom of those studies is that there's not a huge impact one way or another on efficiency if a set of workers are unionized.

Meanwhile, my NPR colleague Liz Halloran wrote an informative piece for our web site examining the question of whether public employees are better compensated than those in the private sector for comparable jobs.

It turns out this is case for one of those two-handed economists President Harry Truman hated since there are arguments that public workers are and aren't better paid than those in the private sector.

The image of public workers as sitting fat and happy while those in the private sector struggle has proved potent. But its accuracy is open to wide debate, and not just among politicians of different stripes. "You ask 10 economists about this, and you're get 12 different answers," says Keith Bender, an economics professor at the University of Wisconsin, Milwaukee.

So do public union workers, while enjoying better job security, actually receive richer pay and benefit packages than those in the private sector?

Bender is one of the economists who argue in a recent study that public workers actually receive less compensation in combined wages and benefits than those in comparable jobs in the private sector.

In a study last year for the National Institute for Retirement Security and the Center for State and Local Government Excellence, Bender and co-author John Heywood, also a UWM economics professor, assert that wages for typical state workers are 11 percent less than those in the private sector with comparable education and in comparable jobs. Local workers earn 12 percent less, they say...

But get that two-handed economist again because here's a contrary view:

But some, including management expert Brooks Holtom of Georgetown University, take issue with assertions that public employees are less well compensated than their private counterparts, when job security and benefits are taken into consideration.

"At a time of high unemployment, it's not hard to understand why people would question why these workers have these protections," Holtom said. "What's so special about these workers?"

Many point to an analysis by USA Today last year that asserted, based on data from the Bureau of Economic Analysis, that federal civil servants — not state or local ones — had in 2009 "average pay and benefits" that were nearly double those of private workers.

An analysis by PolitiFact.com, however, found that public vs. private claims can be problematic given both the difficulty in making apples-to-apples comparisons and the higher percentage of white-collar jobs in the public sector.

Its research found a decidedly mixed bag: some salaries in the public sector higher, some lower.

Holtom says he sees the unfolding arguments in the states as boiling down more to public union rules — such as mandatory membership — rather than an attack on civil service rules.

He sees pay and benefits for public service employees as unsustainable and the state-based debates part of a "course correction."