Accessibility links
State Budget Fights - Feb. 28 Edition : It's All Politics It was a new week but with the same old standoffs in Wisconsin and beyond as Republicans still pushed bills to limit union rights. In Wisconsin, state officials began to try to regain control of the state capitol which had been crowded with pro-union protesters foro days. 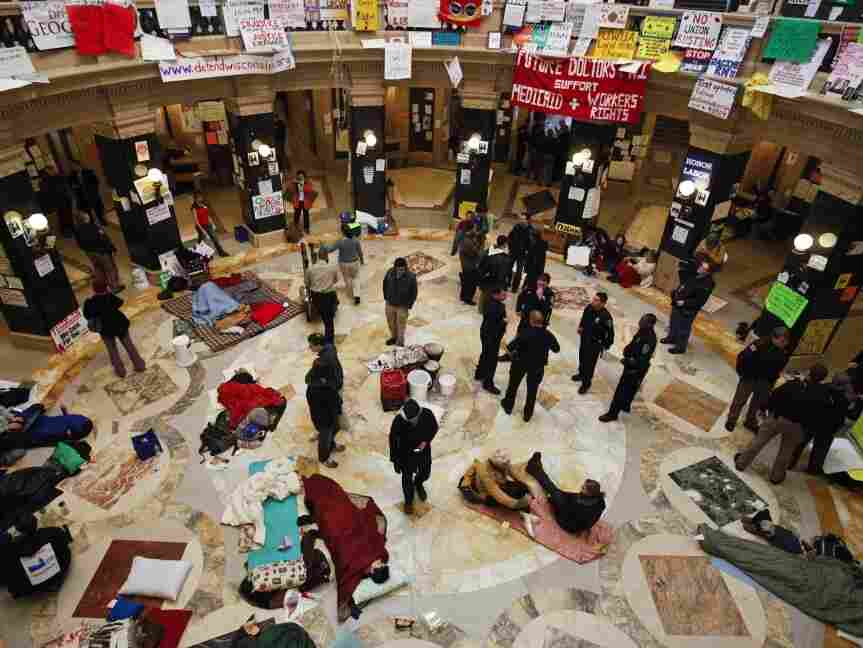 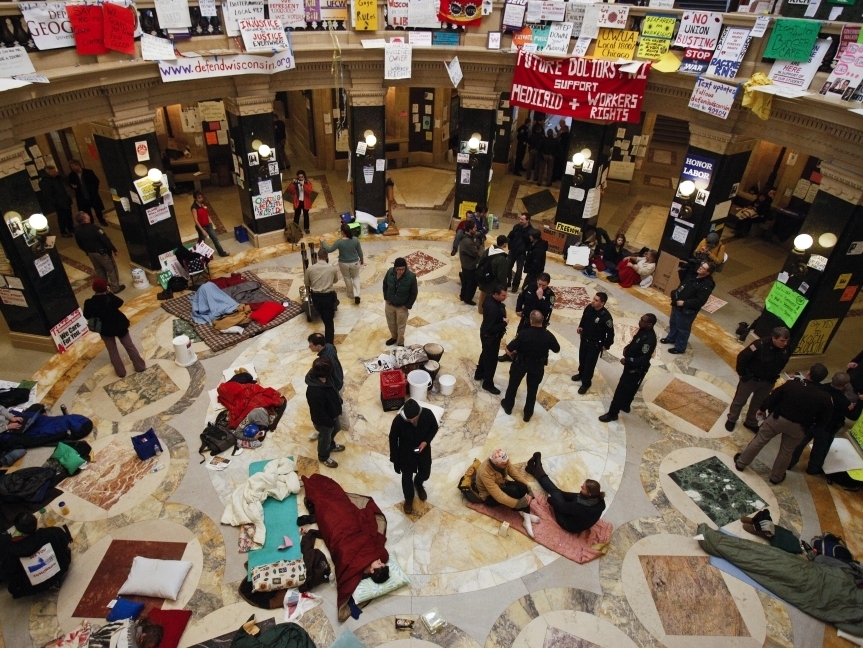 Police and demonstrators in the Wisconsin Capitol rotunda on day 14 of protests, Monday, Feb. 28, 2011.

It was a new week with the same old partisan stand-offs in Wisconsin, Indiana and Ohio between Republicans controlling the statehouses on one side and minority Democrats and angry union supporters on the other.

The last day of February found Republican state officials in Madison, Wis. attempting to exert more control over pro-union protesters who've camped out for many days inside the state capitol building.

Police allowed some protesters to sleep in the statehouse overnight. But starting Monday morning they put up security tables reminiscent of airport TSA checkpoints to screen members of the public seeking entrance to the building, according to news reports.

The state's Republican administration is apparently not allowing new people into the building until protesters who stayed overnight leave.

From the Milwaukee Journal Sentinel's All Politics blog:

State Department of Administration executive assistant Jodi Jensen released a statement Monday saying that no one from the public would be allowed into the building until all the protesters from Sunday night leave.

State officials hope to tidy up the building for Gov. Scott Walker's speech to a joint session of the Wisconsin legislature Tuesday.

Meanwhile, there's no end in the sight to the standoff that pits Walker and fellow Republicans against the Democratic state senators who fled Wisconsin for Illinois. The Democrats hope to stall legislation that would limit the collective bargaining rights of the state's public-employees unions.

The weekend saw large protests in Madison, Wisconsin and smaller ones in solidarity elsewhere as pro-union demonstrators continued to condemn what they saw as cynical attempts by Republicans to use fiscal crises in the states to further weaken an already struggling organized labor movement.

In Indiana, it's the Democrats in that state's house chamber fled for asylum in Illinois in their effort to prevent the Republican majority from passing legislation seen as hostile to unions as well.

The Indianapolis Star reports on how each side is seeking the advantage:

Both sides are trying to ramp up the pressure. Actor Danny Glover is coming in the afternoon to speak to the labor union protesters who have flooded Statehouse hallways. And Gov. Mitch Daniels' Political Action Committee, Aiming Higher, has begun airing two radio ads around the state attacking the Democrats' action, and in particular House Minority Leader B. Patrick Bauer, D-South Bend.

One ad features a woman singing to the tune of "Won't You Come Home, Bill Bailey?" But the words are: "Won't you come home, Pat Bauer?"

In Ohio, statehouse Republicans intend to bring to a vote this week a bill that would also limit collective bargaining rights for unions that represent public workers.

The Columbus Dispatch reports that while Republican lawmakers in the state senate are offering numerous amendments to the bill, Democrats have offered no amendments, preferring to sit this one out. An excerpt from the Dispatch's Sunday report:

As hundreds of union supporters protested outside yesterday, Senate President Tom Niehaus met in his Statehouse office with Senate GOP leadership preparing changes to a collective-bargaining overhaul bill he hopes to pass this week.

The next committee hearing on Senate Bill 5 is scheduled for Tuesday. Niehaus, R-New Richmond, said he is reviewing dozens of amendments, none of which was submitted by Democrats, who say the bill is too extreme to fix.

Niehaus said they "abandoned the legislative process on this bill."