Accessibility links
Boehner: House Will Defend Defense Of Marriage Act : It's All Politics Speaker Boehner said President Obama focused on social issues instead of jobs, as voters wanted. That charge led a gay rights group, Human Rights Campaign, to accuse Boehner of hypocrisy for doing what he accused the president of.

Boehner: House Will Defend DOMA; Courts, Not Obama, Should Decide

Boehner: House Will Defend DOMA; Courts, Not Obama, Should Decide 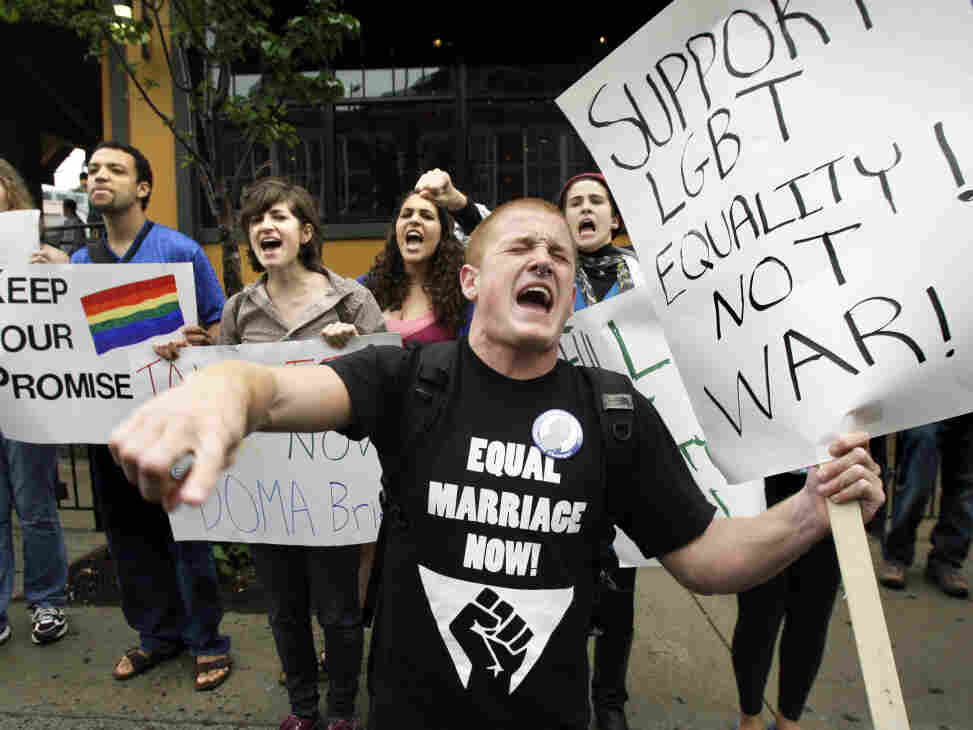 A protest against the Defense of Marriage Act outside a Democratic National Committee fundraiser in Boston at which Vice President Biden spoke, June 2009. Elise Amendola/AP hide caption 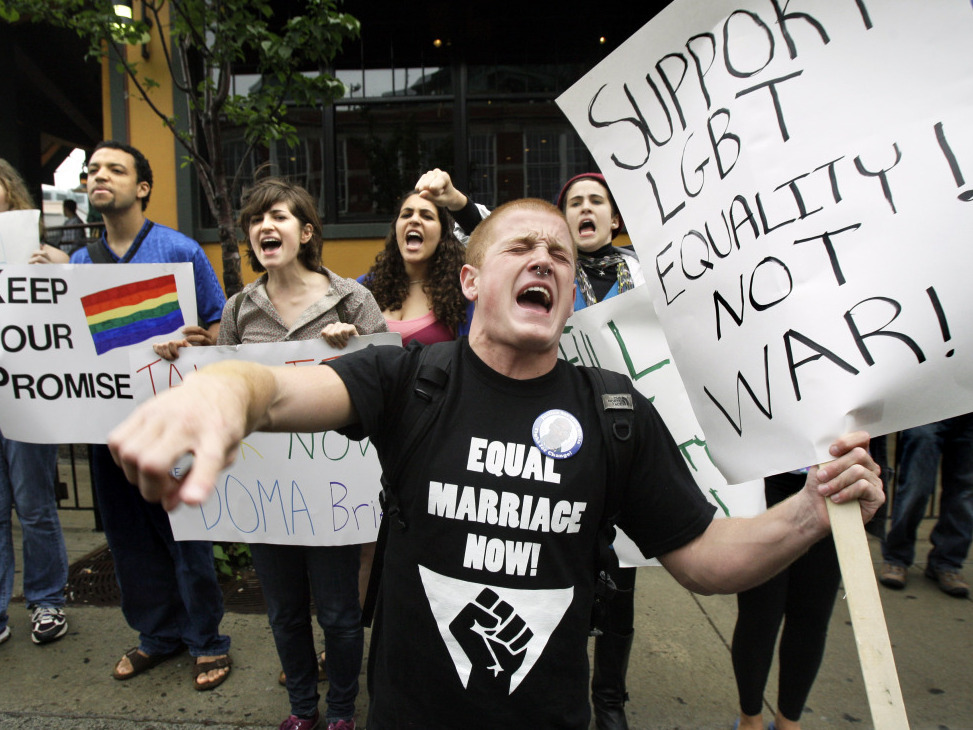 A protest against the Defense of Marriage Act outside a Democratic National Committee fundraiser in Boston at which Vice President Biden spoke, June 2009.

In an expected move, Speaker Boehner said Friday the House would defend the Defense of Marriage Act.

The move comes in the wake of the Obama administration's decision to refrain from defending the law because of its legal assessment that the law is unconstitutional.

Under DOMA, enacted in 1996, states aren't legally required to recognize same-sex marriages that might be legal in other states or jurisdictions. Thus, it provided an an exception to the U.S. Constitution's "full faith and credit" clause.

In a statement, Boehner implied that President Obama had overstepped his constitutional authority by deciding to have his Justice Department no longer defend the law in court.

"I will convene a meeting of the Bipartisan Legal Advisory Group for the purpose of initiating action by the House to defend this law of the United States, which was enacted by a bipartisan vote in Congress and signed by President Bill Clinton. It is regrettable that the Obama Administration has opened this divisive issue at a time when Americans want their leaders to focus on jobs and the challenges facing our economy. The constitutionality of this law should be determined by the courts — not by the president unilaterally — and this action by the House will ensure the matter is addressed in a manner consistent with our Constitution."

NOTE: The Bipartisan Legal Advisory Group is a five-member panel consisting of the Speaker of the House, Majority Leader, Majority Whip, Minority Leader, and Minority Whip. Under House rules, the advisory group has the authority to instruct the non-partisan office of the House General Counsel to take legal action on behalf of the House of Representatives.

Boehner's statement was likely to win approval from Tea Party activists who have made adherence to their interpretation of the Constitution paramount. It was also likely to win the approbation of social conservatives who have criticized Obama's decision.

That meeting of the bipartisan group could be interesting. House Minority Leader Rep. Nancy Pelosi (D-CA) is a staunch and voluble opponent of DOMA.

Rep. Steny Hoyer (D-MD), the minority whip, voted for DOMA in 1996. But he was one of the congressional leaders who pushed the hardest to repeal Don't Ask, Don't Tell and also received the support of many House progressives when he ran for the leadership position.

In a statement released earlier this week, Human Rights Campaign urged Boehner not to pursue defending "discriminatory DOMA," and has launched a "Don't defend, instead repeal" lobbying effort.

HRC, then nation's largest gay right organization, also questioned whether GOP leaders would schedule what it characterized as a "legally unnecessary" House vote on the move to "score cheap political points while taking their eye off the ball on the economy."

The conservative Family Research Council has been urging GOP congressional leaders to defend DOMA in court. Anti-gay marriage organizations like FRC, citing a desire to create a legal trail that would make it difficult for any court to find that there is an "emerging consensus" in favor of same-sex marriage as the issue makes its way to the Supreme Court.

Boehner's charge that Obama failed by addressing a social issue when voters really want policymakers to focus on jobs was thrown back at him by the HRC.

From the HRC news release:

"The decision to mount an all-out defense of DOMA is particularly hypocritical given the Speaker's contention that the President was distracted from focusing on the economy by DOMA," said (HRC President Joe Solmonese.)