Accessibility links
Newt Gingrich Seems To Blame Past Personal Lapses On Patriotism : It's All Politics Former House Speaker Newt Gingrich partly blamed his passionate work on behalf for the country for his past personal indiscretions. It's a novel and creative explanation meant to appeal to the social conservatives, including born-again Christians, so important in Republican primaries and caucuses.

Newt Gingrich Seems To Blame Past Personal Lapses On Patriotism

Newt Gingrich Seems To Blame Past Personal Lapses On Patriotism 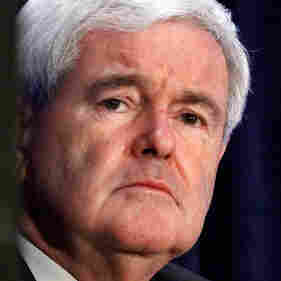 Former House Speaker Newt Gingrich can't avoid the reality that his personal past is a problem in Republican primaries and caucuses where social conservative activists, including born-again Christians, will play a large role in choosing who eventually becomes the Republican nominee.

So his challenge is to arrive at a formulation that explains some of that controversial behavior, including the extramarital affair that led to his third and current marriage.

Gingrich, who hasn't officially announced for the White House but is exploring the level of voter interest in his potential candidacy, appeared on the Christian Broadcasting Network, or CBN, to attempt an explanation.

His explanation seems to be that he was so focused on doing the nation's work, that he didn't pay enough attention to his personal life.

Callista and I have a great marriage. I think that I've learned an immense amount. And I do feel, in that sense, that God has given me, has blessed me with an opportunity as a person. Forget about all this political stuff. As a person, I've had the opportunity to have a wonderful life, to find myself now, truly enjoying the depths of my life in ways that I never dreamed it was possible to have a life that was that nice.

So instead of "the devil made me do it," Gingrich is trying the more novel argument of "my country made me do it."

It may not work to win over enough voters in the target audience to make him the nominee if he actually decides runs.

But Gingrich should certainly get credit for offering one of the most creative explanations for past behavior that would keep many less confident politicians from attempting a similar comeback.