Accessibility links
Sen. Claire McCaskill Haunted By Videotaped Words : It's All Politics Democratic Sen. Claire McCaskill of Missouri was once videotaped telling an audience that they should not vote for her if they ever saw her words and deeds diverge. Now that's coming back to haunt her as amid a controversy over her charging taxpayers for her use of her own airplane. 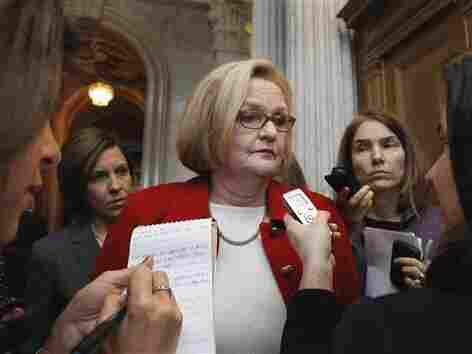 If you were a politician caught in what looks to many like a hypocrisy trap, the last thing you'd probably want is for a videotape to start making the rounds in which you apparently tell voters they should not vote for you if they ever caught you saying one thing and doing another.

Yet, that's exactly the fix Sen. Claire McCaskill (D-MO.) is in.

In the wake of reports that she charged taxpayers for a number of business flights she took on a charter aircraft she co-owns with her husband, and that she failed to pay property taxes on the plane, the National Republican Senatorial Committee has created a fairly devastating ad. (It has an accompanying web site: www.claireair.com)

At the end of the ad, which contains snippets of TV anchors talking about the controversy, there's video of the senator telling an audience:

I would advise Missouri voters to prepare themselves to see that video of her uttering that line, oh, probably no less than eight million times before Election Day 2012 puts them out of their misery.

Speaking of misery, adding to McCaskill's is Politico, which broke the initial story about her problematic flights. Now the news outlet is pointing people to an ad McCaskill made in her 2006 campaign in which she took a shot at her Republican opponent, Sen. Jim Talent. In it, she uttered this line about herself and her husband:

"And we have paid every cent of our taxes."

But wait, there's more. Politico also has a post that recounts how in 2004 McCaskill attacked the Democratic governor who she challenged in the primary for taking more than 300 taxpayer-funded trips on the state's airplane.

While it most assuredly looks bad for McCaskill right about now, who knows how any of this will turn out? It's not impossible for her to survive this, especially if she gets lucky in her opponent.

But this is shaping up to be quite the tale of self-inflicted political damage. National Journal's Hotline On Call spells out why McCaskill has a political disaster on her hands.