Accessibility links
Healthcare Law At Year One: More Questions Than Answers : It's All Politics At the one-year anniversary of President Obama's signing of the Affordable Healthcare Act, perhaps the truest thing that can be said is the healthcare overhaul remains controversial and confusing.

Healthcare Law At Year One: More Questions Than Answers

Healthcare Law At Year One: More Questions Than Answers 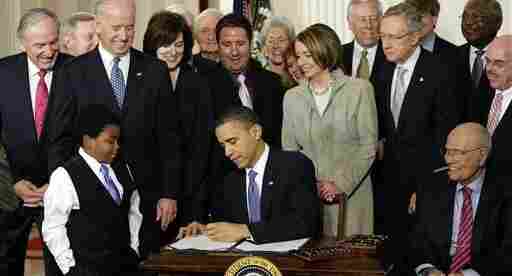 At the one-year anniversary of President Obama's signing of the Affordable Healthcare Act, perhaps the truest thing that can be said is the healthcare overhaul remains controversial and confusing.

Usually a year's passage brings greater clarity to an issue. But one year on it seems there are more questions than answers.

In part, that's because various pieces of the law take effect over several years. In part, it's because of the legal challenges likely to only be resolved when the Supreme Court decides the question of whether the law is constitutional.

And, of course, the health care system is so vast, with so many moving parts, only those who follow it closely really have a chance to understand many of the changes. And even some of them will admit to be confused.

Still, there are a few places to look to try and get a handle on what's happening. Kaiserhealthnews.org is a valuable information source. For instance, KHN asked experts how they expect health care will play out over the next year.

Some of the predictions are really down in the weeds, important but the kind of stuff that makes laypeople's eyes glaze over. For instance, Lloyd H. Dean, president and CEO of Catholic Healthcare West said:

Over the next year you'll see more ACOs and more sharing of data and integrating ourselves with other providers.

An ACO, in case you were wondering, is an accountable care organization and KHN has a helpful page that explains what they are and the role the new law envisions for them.

Another expert, Wendy Schiller, a Brown University political scientist, offers a prediction that's easier for students of politics to wrap their heads around:

Independents are the only [voting] group you're really looking at in terms of health care. And the issue will be the battles for the key states — Ohio, Pennsylvania, Illinois, Michigan, Florida and California. It's really, ironically, going to be a much more localized issue than it is a national issue. From this point forward, it's the implementation of the health care act that will matter much more for Obama in 2012 than the passage of the act itself.

MSNBC's First Read blog, meanwhile, has a post that provides enough facts and figures to work into a month's worth of dinner party conversations.

Here's a passage on what happened to congressional Democrats in the wake of the healthcare law's enactment.

The Health and Human Services Department also has a site for the Affordable Care Act that, as you'd expect, essentially cheerleads for the new law:

From preventive care with no out-of-pocket costs to prescription drug discounts for Seniors, from young adults having the chance to stay on their parents' insurance to tax credits for small businesses, the Affordable Care Act is providing new health care rights, protections and choices.

Cheerleading for the law's opponents who disparage the legislation as ObamaCare are conservatives, some of whom are at the American Enterprise Institute and Heritage Foundation.

Policy analysts at both places combined on a new book available this week titled "Why ObamaCare is Wrong For America: How the New Health Care Law Drives Up Costs, Puts Government in Charge of Your Decisions, and Threatens Your Constitutional Rights."

A year out, there's still a lot of fog being created by partisans on both sides as they war for the hearts and minds of 2012 voters.