Accessibility links
U.S' Rising Diversity Will Change Politics, Sometimes Unpredictably : It's All Politics The fast growth of Hispanics in the U.S. will change politics in anticipated and unexpected ways. 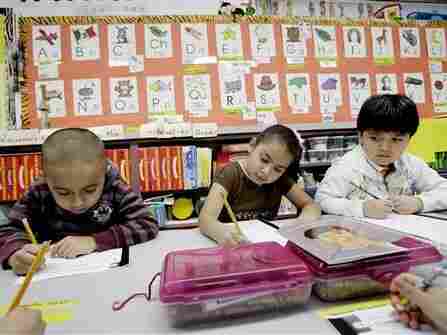 The big news from the Census Bureau's release Thursday of state-level data from the 2010 enumeration, was that the Hispanic population grew rapidly during the last decade, with Latinos comprising 16.3 percent of the population, or 50.3 million people, compared with 12.5 percent in 2000.

Looked at another way, the rise in the numbers of people who identified themselves as Hispanics accounted for more than half the growth in the U.S. population over the decade.

Meanwhile, the minority population, driven predominantly by that sizable surge in the Hispanic population, grew in virtually every state, propelling significant overall population growth in states in the South and Southwest.

The population gains in states like Texas, Florida and Nevada mean they will gain more seats as a result of reapportionment even as Ohio and Michigan lose seats.

In the short-term, that's could help Republicans who generally control governorships and state legislatures in those states adding congressional seats.

But, again, much of the population growth is driven by Hispanics. And Hispanics skew heavily Democratic.

For instance, even last November when a Republican wave swept Republicans into power in the U.S. House, Hispanics voted almost 2 to 1 for Democrats.

So some of the states and congressional districts that were previously safely Republican red could start looking more purple.

Meanwhile, blacks are moving in significant numbers out of cities like Chicago, Washington, D.C., Los angeles and Detroit where they have long resided and moving to suburbs. They are also moving to the South.

Ever since the great realignment of the New Deal when blacks began to leave the Republican Party of Abraham Lincoln for the Democratic Party of Franklin D. Roosevelt, blacks have been overwhelmingly Democrats.

As the number of African-Americans rises in suburbs that may have previously been more white and Republican, some of these places will become more purple, too, and be increasingly in play.

On the other hand one benefit, at least for Democrats, of past residential segregation which locked blacks into certain areas of metropolitan geography was that it made it easier for state legislators to draw black districts, safeguarding certain seats for the Democratic Party.

Still, at first blush, it would seem that the net impact of the changing landscape favors the Democratic Party.

Democrats as a party, for instance, have been more favorably disposed towards immigration reform than Republicans.

Republicans, for their part, have been split on the issue. The part of the GOP that is hostile to the idea of providing a path to legal status, which they call an amnesty, to illegal immigrants has had more sway than those Republicans who favor reform.

That's not to say that all Democrats favor easing the path to citizenship for illegal immigrants. Some African Americans, for instance, have long worried about undocumented workers who they see as competing with them for jobs and public services. Those feelings were likely made more acute by the Great Recession.

But the way the immigration debate has played out in recent years certainly seems to be to the advantage of Democrats in the competition for Hispanic votes.

President Obama, whose re-relection was favored by 66 percent of Hispanics surveyed by a recent Pew Research Center Poll, called for a debate on immigration reform in this year's State of the Union. And he no doubt will keep calling for it on the campaign trail.

The demographic shifts in the nation could also lead to an intensification in racial voting as white, black and Hispanic voters respond on consciously or subconsciously to the nation's changing majority-minority patterns.

In U.S. history, the growing influence of groups viewed as outsiders by the majority has sometimes resulted in backlash.

That was true when the federal government increased civil-rights protections for blacks led to what had once been the Solid South to shift from the Democratic to Republican parties.

Whatever happens, the nation is hurtling toward an unprecedented moment. As NPR's Alex Kellogg reported on Morning Edition, because of the fast Hispanic population growth, the date when demographers estimate that the nation's minorities will, when added together, number more than whites has been moved closer to the present. It now looks like it will happen in 2042.

That's 550 years after Christopher Columbus arrived in the New World as the vanguard of the then new minority group in the Americas known as Europeans.