Accessibility links
Gov. Haley Barbour Defends Use Of State Jet : It's All Politics Gov. Haley Barbour defended his frequent use of his state's jet, saying it didn't exceed by very much that of his Democratic predecessor. But that predecessor wasn't openly toying with running for president in a time when state and federal governments were in fiscal crisis. 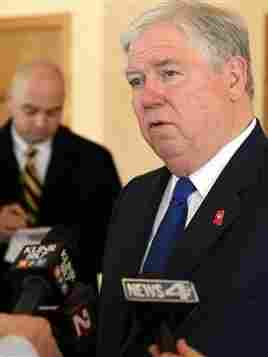 Mississippi Gov. Haley Barbour has been drawing heavy criticism for his frequent flights to political events on his state's Cessna Citation jet.

Barbour and his aides have defended the Republican governor who's considering a presidential run by saying that he's conducting the state's business on these trips.

And Barbour defended himself more Friday by telling an Associated Press reporter he's not doing anything much differently than his Democratic predecessor in the Magnolia State's governor's mansion.

Of course that predecessor, Ronnie Musgrove, wasn't openly considering a presidential run during a time when state and federal governments are struggling with fiscal problems. But I digress.

"I will tell you that compared to my predecessor, my hours on our state plane are almost exactly the same, less than 10 percent difference per year,"' Barbour told The Associated Press during a visit to Iowa.

Barbour's critics say the problem for Barbour is that the flights don't match the governor's message that government needs to scale back spending.

Time magazine recently noted, for instance that Barbour flew himself, his wife and three aides to Washington for $7,020 for the Conservative Political Action Conference in February in part for a speech where he said "Our problem is not that we tax too little. It's that we spend too much."

Before that, the Clarion-Ledger reporter Elizabeth Crisp wrote that the governor spent $18,602 of state taxpayers' money a year ago on a Las Vegas trip "in which he hobnobbed with potential donors and power players."