Accessibility links
At U.S. Capitol, Tea Party Rallies For Spending Cuts : It's All Politics As Tea Party members rallied in Washington while Democratic and Republican lawmakers tried to reach agreement on spending legislation to avert a government shutdown, the grass-roots group had a message for the GOP - no retreat and no surrender on spending cuts. 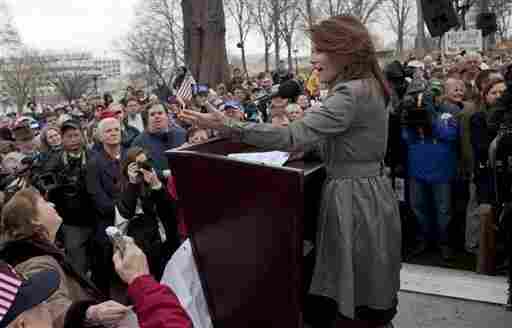 Trying to keep the pressure on congressional Republicans to make good on their promise to deliver deep federal spending cuts, members of the Tea Party movement rallied in the early Spring rain outside the U.S. Capitol Thursday.

The rally of a few hundred people, organized by the Tea Party Patriots, came against the backdrop of negotiations on a spending agreement for the rest of the fiscal year between House Republicans on one side and Senate Democrats and the Obama White House on the other.

With news reports that Republicans and Democrats could be nearing a compromise that would avert a partial shutdown of the government next Friday with the expiration of the spending agreement the government is now operating under, the message from the rally's speakers and those in the crowd was essentially no retreat and no surrender.

People attending the rally were heard shouting "cut it or shut it," meaning the government, reported the Associated Press' Laurie Kellman.

Rep. Joe Walsh of Illinois, a member of a House GOP freshman class that is 87 strong, invited the crowd to keep a fire lit under him and his fellow lawmakers. More accurately, his chosen metaphor was of a boot. Walsh said:

"Have that boot ready to put that boot somewhere where the sun doesn't shine. Keep us going. We do not have a lot of time folks. Keep the pressure on us."

Walsh was just one of a number of House Republicans, including freshmen like himself who were elected with an assist from the Tea Party movement, who put in brief appearances.

Among the Republican lawmakers rallying the crowd were Rep. Michele Bachmann of Minnesota, head of the House Tea Party Caucus, and Rep. Allen West, a retired Army colonel and a Tea Party favorite.

Interspersed with the obligatory shots at "Obamacare" and praise for the Founding Fathers and the Constitution, was the message that those with Tea Party sympathies would be satisfied with nothing less than the whole loaf of spending cuts.

The whole loaf, in this case, would be the $61 billion in spending cuts, as measured against President Obama's proposed 2011 budget, that the GOP-led House passed in January.

Democratic and Republican leaders have reportedly had a meeting of the minds on a lower amount of spending cuts, in the neighborhood of $33 billion.

As might be expected, since House Republicans created expectations on the campaign trail last year that they would cut $100 billion out of federal spending, reports that House Republicans were making necessary agreements to reach an agreement and keep the government humming weren't necessarily welcomed by Tea Partiers.

From the Associated Press:

"They're chicken. They're cowards," said the 60-year-old
resident of Westmoreland County, Pa., who says he's been active in
Republican politics. Nonetheless, he said of the House's ruling GOP
officials: "They're our employees. We need to fire them."

"It's not the Republican freshmen, it's Boehner and the
Republican leadership," said Cincinnati retiree Richard Ringo.

"Last year, a lot of people thought, 'Well, the Republicans are in
power now, we can relax.' But they're doing the same thing they
always do, whether it's the Republicans or the Democrats."