Accessibility links
Deal Proves Compromise Is Alive, If Not Well : It's All Politics Both sides had to give in Friday to last-minute budget talks. But Democrats and Republicans also showed they can bridge fierce differences, if only when they are staring into the abyss.

Deal Averting Shutdown Proves Compromise Is Alive, If Not Well

Deal Averting Shutdown Proves Compromise Is Alive, If Not Well 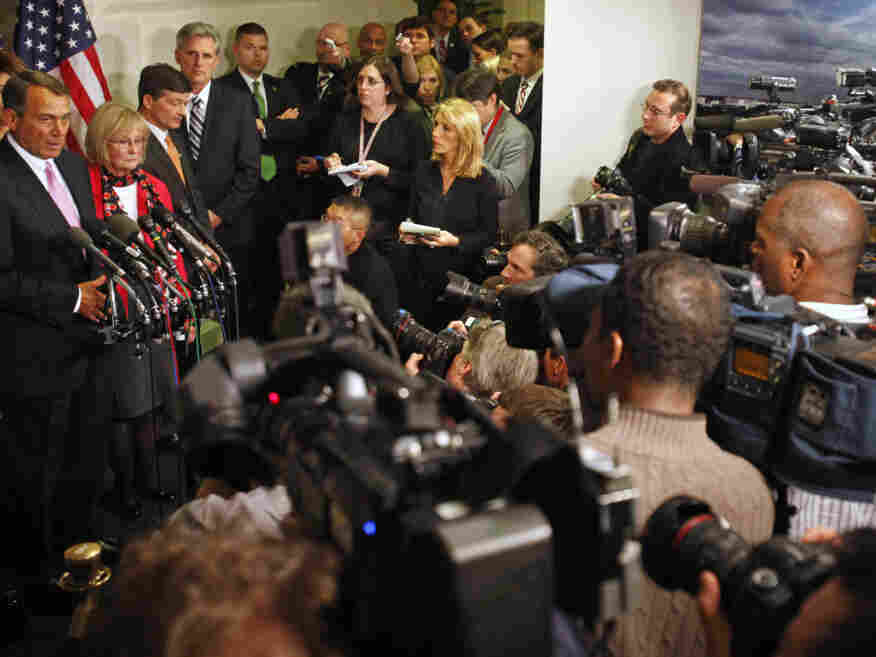 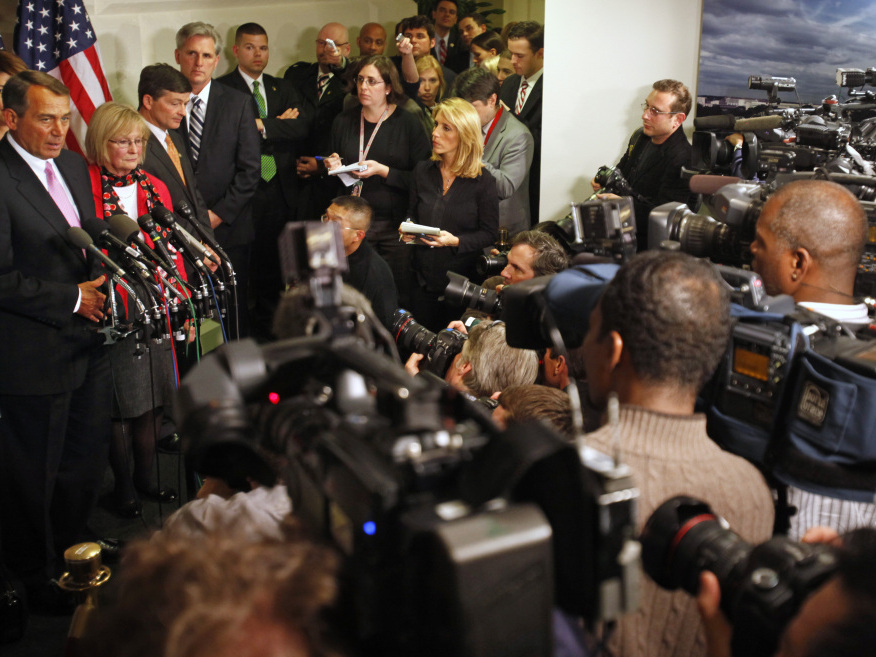 Reports of the death of compromise in Washington are greatly exaggerated.

That's one important message from the 11th-hour agreement that averted a partial shutdown of the federal government Friday night.

"No compromise" has been the rallying cry of the Tea Party movement. Some Republican lawmakers have echoed that.

But the agreement reached Friday was the epitome of compromise. Republicans had come into the negotiations demanding $61 billion in spending cuts from the remainder of fiscal year 2011 which ends in September.

GOP lawmakers also wanted numerous policy riders on the legislation that would have placed restrictions on social policies. They included the much-argued Planned Parenthood rider to bar the organization from receiving any federal funding.

By the time negotiations ended late Friday, Republicans had agreed to $41 billion in cuts, including $2 billion in a stopgap bill that funds the government through next Thursday, and had dropped most of their policy riders.

For their part, Democrats had initially offered a far smaller menu of cuts, then begrudgingly got up to about $30 billion before finishing about $11 billion above that level.

Meanwhile, Senate Democrats agreed to allow votes on defunding the Affordable Care Act and Planned Parenthood and agreed that there would be no additional funding of Internal Revenue Service agents to enforce the new health care law's individual mandate provisions.

The defunding votes aren't expected to pass in the Senate but, again, it was a a not inconsiderable concession by Democrats to promise the floor votes at all. The health care law vote, for instance, will likely cause heartburn for some Democrats facing tough re-election fights, like Sen. Clair McCaskill of Missouri and Sen. Ben Nelson of Nebraska.

That a compromise was possible and a shutdown averted at least proves that Democrats and Republicans are capable of bridging fierce differences, if only when they are staring into the abyss.

Heading into the fights over raising the federal debt-ceiling as well as the fiscal 2012 budget, the agreement establishes what is possible. Not that those fights will be easy.

The dynamics of each of those will be different because of their greater significance.

The debt ceiling is about the "full faith and credit" of the U.S., which has even greater long-term consequence than the 2011 budget.

And the 2012 budget fight will in large part be a battle over the future of the Medicare and Medicaid entitlements.

But with lawmakers clearly blinking at the prospect of shutting down the government if even for a few days, it's difficult to imagine them wanting to cause a worldwide financial disruption by failing to increase the debt ceiling.

Of the three major players in the shutdown showdown, Speaker John Boehner probably had the most to gain and lose if the government had been forced to partially close.

The other major players, President Obama and Senate Majority Leader Harry Reid, had already proven their ability to get major complicated legislation over the finish line, past resistance in their own and opposition parties.

If Boehner hadn't been able to close a deal, it would have thrown into doubt his ability to deliver during future negotiations with the White House and Senate.

Instead, he has achieved an important success. He showed he can ride herd on his Tea Party firebrands enough to successfully close a deal like the spending agreement.

He can also take credit for forcing Democrats to accept a historic level of spending cuts.

"As you all know, this has been a lot of discussion and a long fight. But we fought to keep government spending down because it really will, in fact, help create a better environment for job creators in our country."

But Democrats were spinning the agreement as a victory, too. The hallmark of a compromise is when both sides can claim a win.

Obama's reaction to the agreement was upbeat and confident, as though things had worked out exactly as he had envisioned.

With the Washington Monument clearly visible through the White House window behind him, the president provided viewers a visual reminder of what was averted, the closing of tourist attractions like the world's most famous obelisk.

But what was particularly striking was how quickly the president moved to co-opt the Republican spending-cut message.

"This agreement between Democrats and Republicans, on behalf of all Americans, is on a budget that invests in our future while making the largest annual spending cut in our history. Like any worthwhile compromise, both sides had to make tough decisions and give ground on issues that were important to them. And I certainly did that.

"Some of the cuts we agreed to will be painful. Programs people rely on will be cut back. Needed infrastructure projects will be delayed. And I would not have made these cuts in better circumstances.

"But beginning to live within our means is the only way to protect those investments that will help America compete for new jobs — investments in our kids' education and student loans; in clean energy and life-saving medical research. We protected the investments we need to win the future."

As a sign of how far the discussion has shifted in Washington since Election Day, Reid also spoke of the importance of spending cuts.

And he gave credit to some players in the drama who haven't gotten much attention in recent days but who apparently played a role in urging Republicans to come to an agreement — the business community. He thanked the U.S. Chamber of Commerce and the Business Roundtable for their help.

A Democratic president and Senate majority leader talking about spending cuts and praising big business. It was definitely a sign of the times.