Accessibility links
Obama Turns Deficit Debate Into Dueling Visions Of America : It's All Politics President Obama framed his deficit fight with the GOP as between competing visions of America, with his being the one tied to the nation's truer self of citizens being responsible for each other. 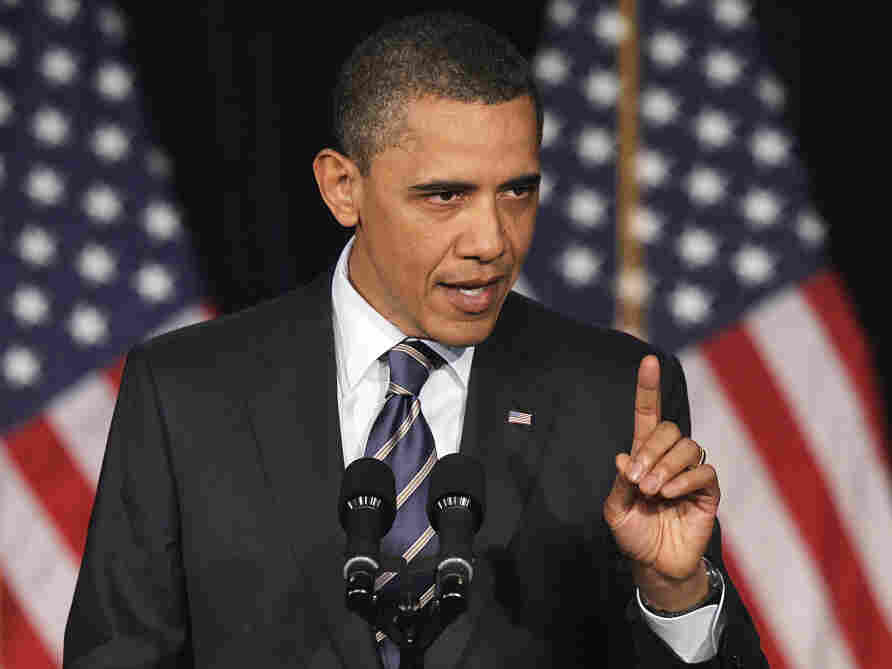 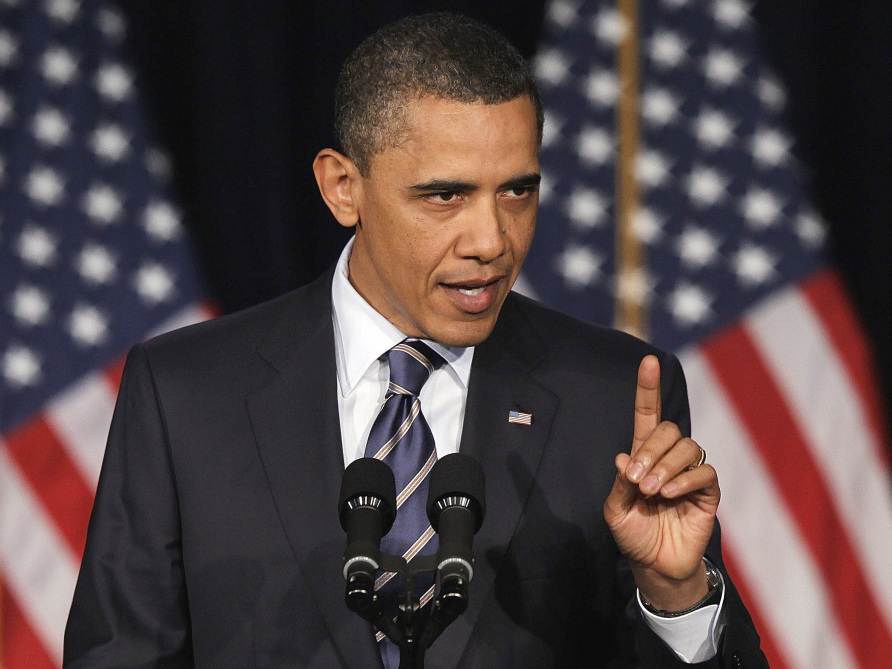 President Obama may not yet know who the Republican nominee will be in the 2012 race for the White House.

He seems fairly confident, however, that whoever it is will need to embrace the House Republicans and their new budget plan to privatize Medicare and continue the Bush tax cuts for the wealthiest Americans.

It's also obvious the president must contend with that same House Republican majority on a range of issues, including, most immediately, raising the debt ceiling and completing a budget for fiscal year 2012.

So one of Obama's main goals in his Wednesday afternoon speech at George Washington University was to draw the contrast between his approach to placing the nation on a sounder fiscal footing and that of the Republicans.

In what some saw as the president's first big set piece speech of his re-election campaign, Obama sought to frame his contest with congressional Republicans and, presumably, the future Republican presidential nominee as a choice between competing visions.

Of course, he saw his as the truer American vision, more in keeping with the spirit of the nation since at least the New Deal era.

It is, Obama said, a vision of a nation knitted together by citizens who feel a shared responsibility for one another.

With this idea in in mind, and in an effort to reach out to the political independents exhausted by partisan bickering and whose support he needs to be re-elected, Obama said:

This sense of responsibility – to each other and to our country – this isn't a partisan feeling. It isn't a Democratic or Republican idea. It's patriotism.

His was also a vision, Obama said, of a nation that has historically aimed high, with government spending helping to create the prosperity that has come to be associated with America.

We believe, in the words of our first Republican president, Abraham Lincoln, that through government, we should do together what we cannot do as well for ourselves. And so we've built a strong military to keep us secure, and public schools and universities to educate our citizens. We've laid down railroads and highways to facilitate travel and commerce. We've supported the work of scientists and researchers whose discoveries have saved lives, unleashed repeated technological revolutions, and led to countless new jobs and entire industries. Each of us has benefited from these investments, and we are a more prosperous country as a result.

In contrast, he painted the vision represented by the Republican budget proposal presented by House Budget Committee Chairman Rep. Paul Ryan (R-WI) as a violation of the sense of that we are our fellow citizen's keeper.

(Speaking of fiscal policy in terms of competing "visions," one light, one dark, was a relatively lyrical poetic approach for a subject - federal fiscal policy - that normally doesn't lend itself to such. The "vision" thing recognized that Americans have an optimistic bent and tend to see themselves as inherently good, and Obama's message was clearly meant to tap that. )

By proposing to privatize Medicare, turn Medicaid in large measure over to the states, extend the Bush-era tax cuts for the wealthiest and cut programs that help the middle class, Republicans were offering a diminished vision of America, Obama argued. He was betting that enough Americans, despite their concerns about deficits and the debt, will choose his vision over his opponents':

The fact is, their vision is less about reducing the deficit than it is about changing the basic social compact in America. As Ronald Reagan's own budget director said, there's nothing "serious" or "courageous" about this plan.

There's nothing serious about a plan that claims to reduce the deficit by spending a trillion dollars on tax cuts for millionaires and billionaires. There's nothing courageous about asking for sacrifice from those who can least afford it and don't have any clout on Capitol Hill. And this is not a vision of the America I know.

The America I know is generous and compassionate; a land of opportunity and optimism. We take responsibility for ourselves and each other; for the country we want and the future we share. We are the nation that built a railroad across a continent and brought light to communities shrouded in darkness. We sent a generation to college on the GI bill and saved millions of seniors from poverty with Social Security and Medicare. We have led the world in scientific research and technological breakthroughs that have transformed millions of lives.

This is who we are. This is the America I know. We don't have to choose between a future of spiraling debt and one where we forfeit investments in our people and our country. To meet our fiscal challenge, we will need to make reforms. We will all need to make sacrifices. But we do not have to sacrifice the America we believe in. And as long as I'm President, we won't.

Obama also wanted to set the record straight. Contrary to what his Republican opponents sometimes seem to suggest, he argued that he didn't cause the deficits.

He went through a history of how the nation managed to work itself in the 1990s out of deficit spending into budget surpluses only to fall back into deficits again.

Apparently wanting to avoid the appearance of partisan-finger pointing that independents hate, he did it all without blaming Republicans by name.

But anyone who's been paying attention in recent years knew he was implicating both the Bush White House and congressional Republicans for their contributions to the current fiscal crisis.

We increased spending dramatically for two wars and an expensive prescription drug program – but we didn't pay for any of this new spending. Instead, we made the problem worse with trillions of dollars in unpaid-for tax cuts – tax cuts that went to every millionaire and billionaire in the country; tax cuts that will force us to borrow an average of $500 billion every year over the next decade.

His history of the period from 2000 up to the time of his presidency had the virtue of being true to a point. But since taking office, he has also added to the size of the deficits through stimulus and other spending.

But on Wednesday, he clearly intended to put the Republican Party on the defensive for its contributions to the nation's fiscal woes. It was a reminder that no one will come to the table to negotiate either raising the debt ceiling or the 2012 budget with entirely clean hands.

As for the president's deficit-reduction proposal, it of course tied back into his vision.

It also leaned heavily on the recommendations of the bipartisan Simpson-Bowles fiscal commission that he created last year but whose proposals he didn't explicitly embrace until Wednesday.

He said his plan would cut $4 trillion from federal spending over 12 years instead of the $6 billion in 10 years of the Republican program.

He would do it in large part by embracing the Simpson-Bowles program, including reforming the tax code to get rid of numerous deductions, cutting defense spending and making changes to entitlement programs.

But just as the Simpson-Bowles panel recommended, he would do it, he said, without damaging the programs middle-class and low-income Americans rely on.

In one of the clearest indications yet that he intends to vigorously defend his health care law from Republican attacks, he said the new law is vital to make a dent in one of the largest contributors to increased federal spending: rising health care costs.

So he vowed to build on the law many Republicans deride as Obamacare and have promised to repeal when and if they regain control of the Senate and White House.

Obama's declaration that he planned to extend his signature health care legislation could be interpreted as a signal to his party's liberals that the candidate who so inspired them in 2008 was still lived inside the president.

Obama's message on the Bush-era tax cuts likely sent the same message, too.

Ending those cuts for couples making over $250,000 and above was an important part of the president's 2008 campaign message.

But when those cuts were due to expire in December, Obama, to the chagrin of many liberals, relented on his promise — or at least delayed it.

Republicans refused to extend unemployment insurance to the long-term unemployed unless the higher-end tax cuts were renewed. Obama says he also feared losing middle-class tax cuts which he did want to extend. So Obama made the trade. His point Wednesday was that was a one-off.

Another perhaps less welcome message for liberals was also aimed at those all-important independent voters.

Obama warned his fellow Democrats they would have to accept changes in the entitlement programs they hold dear, including Medicare, Medicaid and Social Security, to safeguard those programs for the long term.

That may not have been as pithy or declarative as President Bill Clinton's memorable, "The era of big government is over." But Obama is hoping his lengthier formulation has the same positive effect on his electoral chances as Clinton's catchier slogan had for the 42nd president.