Accessibility links
Was Bin Laden's End Linked To Harsh Interrogations Obama Opposed? : It's All Politics President Obama may have been in a position to order the killing of Osama bin Laden because of information derived from the harsh interrogation techniques like waterboarding used against some detainees and places like Guantanamo. 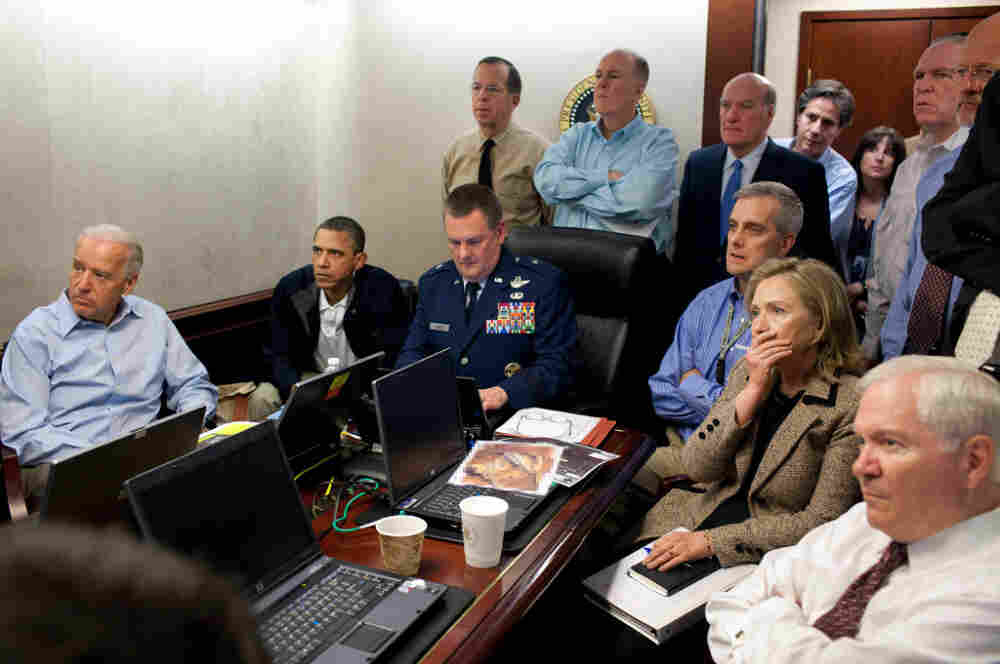 President Obama, Vice President Biden and their national security team follow in real-time from the White House Situation Room the mission to get Osama bin Laden, May 1, 2011. (Note: A classified document in this photograph was intentionally obscured.) Pete Souza/White House hide caption 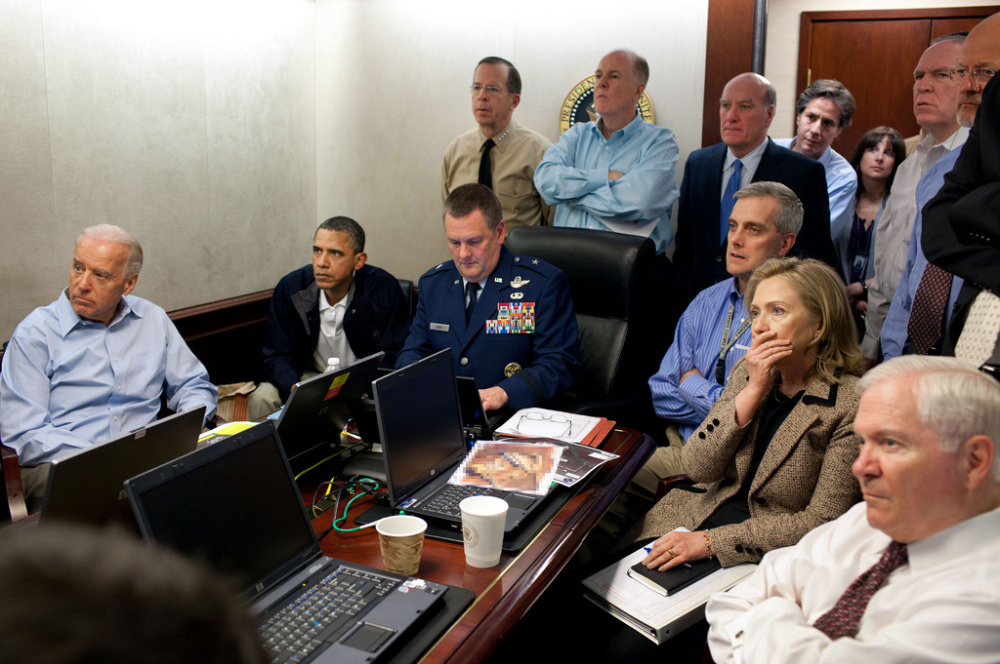 President Obama, Vice President Biden and their national security team follow in real-time from the White House Situation Room the mission to get Osama bin Laden, May 1, 2011. (Note: A classified document in this photograph was intentionally obscured.)

What if the intelligence that led U.S. forces to Osama bin Laden came from the interrogation techniques the Bush Administration called "enhanced" but its critics called torture?

The day after President Obama announced that bin Laden was killed by U.S. special forces at a safe house in Pakistan, that politically inconvenient possibility is being raised by some observers, mainly conservatives.

White House officials haven't provided details on how exactly the intelligence was extracted. But information the administration has provided has led some to suggest it might have been controversial techniques like waterboarding that led to the critical break in the hunt for the iconic terrorist figure.

In an interview with ABC News, for instance, former Vice President Dick Cheney said he didn't know how exactly the U.S. obtained the information that allowed intelligence officials to learn the identity of bin Laden's couriers.

"... But it wouldn't be surprising if in fact that program produced results that ultimately contributed to the success of this venture," Cheney told correspondent Jonathan Karl.

Stewart Baker, who was a senior Homeland Security Department official during the Bush Administration put it this way in an e-mail.

There is a question the administration will need to answer: The key lead in this case seems to have been the identity of the couriers that bin Laden trusted. That information apparently was revealed by one or more Gitmo detainees several years ago, perhaps by the very high level detainees who were interrogated most aggressively. Was this disclosure the result of the harsh interrogation techniques that the US has now abandoned?

Rush Limbaugh made a similar point on his show Monday in a sarcastic opening monologue during which he gave President Obama a backhanded compliment for "continuing" Bush Administration war on terror tactics the radio host considered successful. (It was actually Limbaugh's way of tweaking Obama for trying to close Guantanamo and submit detainees to civilian trials.)

Detainees who may have been waterboarded, and again we need to never forget that President Obama deserves praise for continuing the policies established by George W. Bush which led to the acquisition of this intel that led us to the enlarged hut in Pakistan that led to the assassination of Bin Laden last night. The detainees, many of them started talking, and the couriers were identified. The couriers were then tracked and followed by intelligence operatives, and it was learned as far back as last summer where Bin Laden was.

Obviously, if the intelligence leading to the biggest success in the war against al Qaida resulted from harsh interrogations, that would be a vindication for conservatives who have long argued that such methods were justified because they yielded invaluable intelligence.

That would obviously put Obama in the uncomfortable position, however, of owing what some have called the best day of his presidency to an interrogation technique he not only opposed but prohibited through one of his first executive orders.

If we don't get clarity on this information before, we may get it when administration officials, especially current CIA director Leon Panetta who's been nominated to be the next Defense secretary, go to Capitol Hill for confirmation hearings for their new national-security posts.