Accessibility links
Wall Street Takes Boehner Debt-Limit Speech In Stride : It's All Politics Judging by the reported reaction and the bond market Tuesday, Speaker John Boehner's speech to the Economic Club of New York the night before apparently did little to shake Wall Street's confidence that Washington policymakers will, in the end, agree in time to raise the federal debt ceiling. 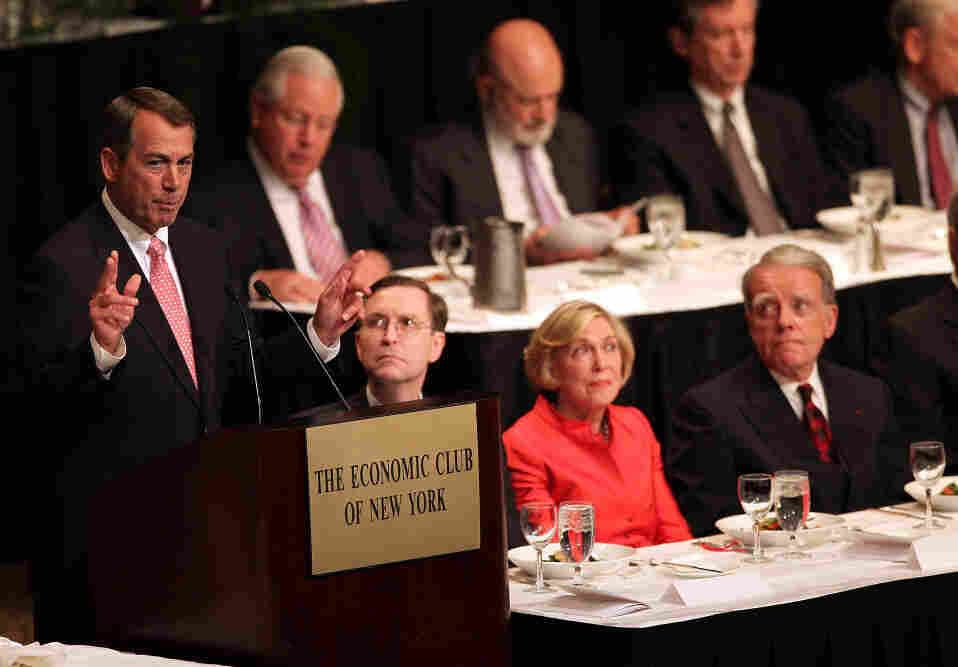 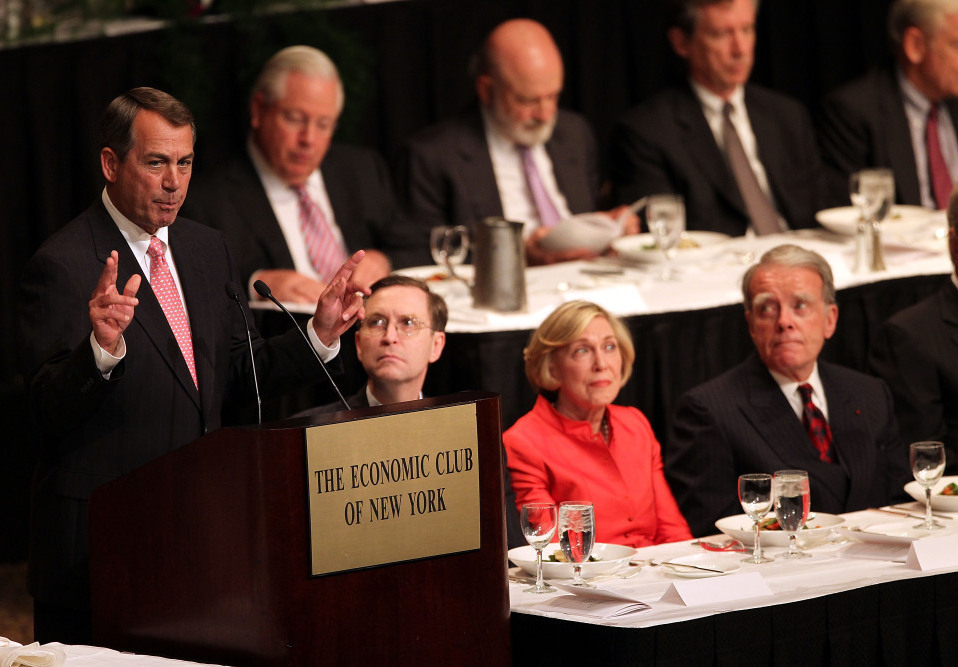 House Speaker John Boehner at the Economic Club of New York, May 9, 2011.

Judging by the reported reaction as well as the bond market Tuesday, Speaker John Boehner's speech to the Economic Club of New York the night before apparently did little to shake Wall Street's confidence that Washington policymakers will, in the end, agree in time to raise the federal debt ceiling.

According to news reports, the financial types who attended the speech didn't seem outwardly alarmed by Boehner saying that any approval to boost the $14.3 trillion debt ceiling by a certain amount would need to be accompanied by even larger spending cuts.

But the assembled lords and ladies of high finance weren't particularly enthused by what they heard either, apparently.

The Speaker's stand drew little reaction from the banquet hall of Wall Street executives, who offered polite applause at the end of Boehner's speech but sat in silence through his demands on the debt limit...

... Attendees offered a mixed reaction to his presentation, with some saying he did little to allay concerns in the financial community about the debt threshold.

"Disconnected from reality," one attendee said as he walked briskly out of the ballroom.

"It was predictable," said Perry Braun, chief investment officer of Wilton Re., a life reinsurance company. "Not that he wasn't genuine, but I think it was posturing."

Nonetheless, Braun said investors are confident Congress will authorize an increase in the debt limit. "They believe that the debt limit will be raised," he said. "The speech tonight didn't change that."

"I think he did allay those concerns, but with a relatively rigid answer," Marquis said. As to Boehner's hard line on not raising taxes, however, Marquis said: "I think that's a bit of posturing."

Obviously, that's not a scientific sample of Republicans and Democrats. In fact, if people on Wall Street know how to do anything, it's how to hedge their bets financially and politically. Braun, for instance, has given to both Democrats and Republicans.

But it's pretty clear the expectation is for a debt-ceiling deal between Democrats and Republicans. It may not come Tuesday at the White House meeting between Vice President Biden and congressional Democratic and Republican leaders but it will happen, the smart money seems to be saying.

More evidence of that came from Tuesday bond trading. U.S. Treasury prices were slightly lower during by midday Tuesday. But that had more to do with bond-market technicalities than Washington's debt-limit fight.