Accessibility links
Bachmann Makes Most Of GOP Debate : It's All Politics ANAYLSIS: Surprising many, Rep. Michele Bachmann inserted herself firmly in the Republican presidential sweepstakes with a polished and confident debate performance largely wrung of the overblown, and frequently false, rhetoric that has made her a cable news favorite. 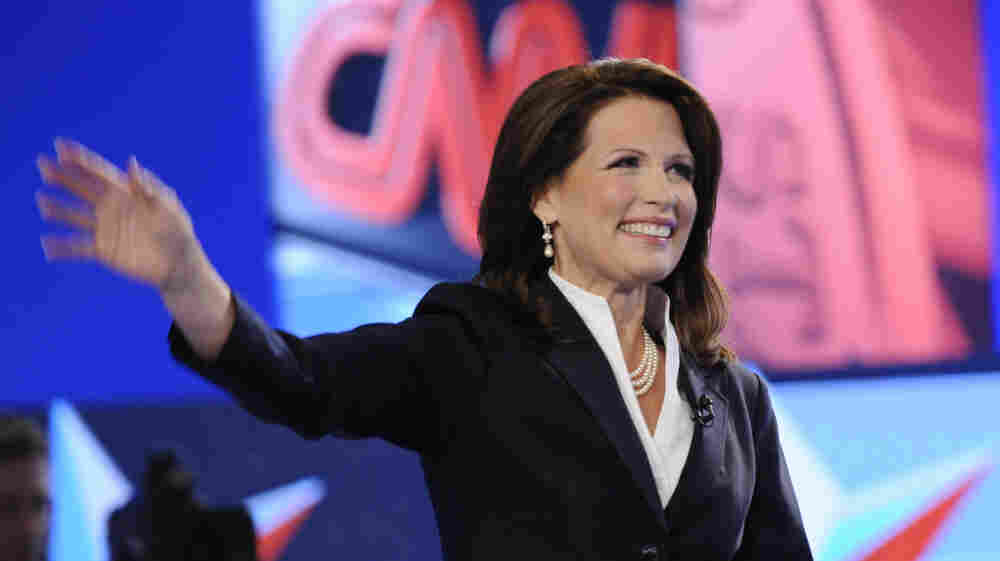 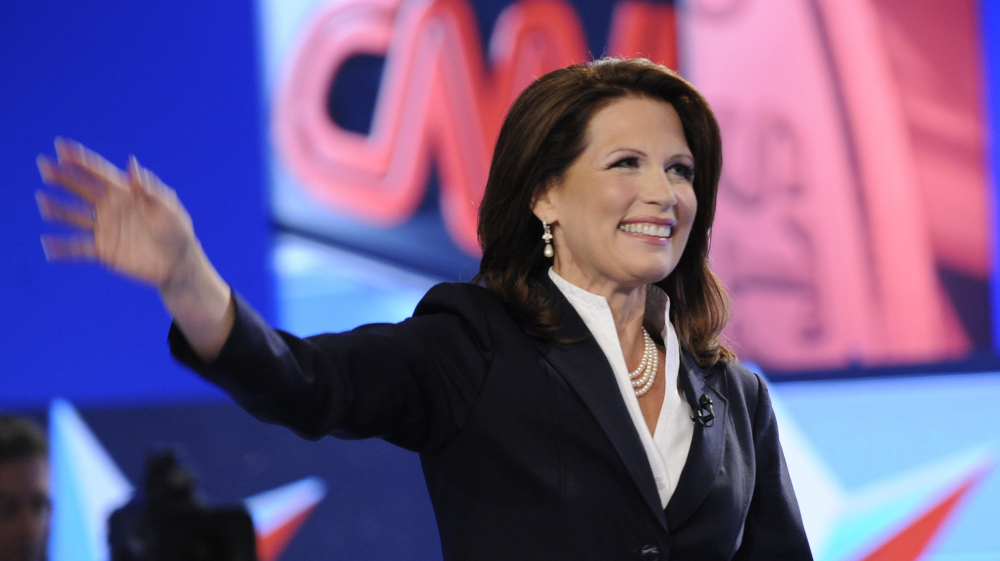 Michele Bachmann (R-MN) announced 11 minutes into Monday night's Republican debate in Manchester, N.H., that she had formally filed papers to run for president.

Michele Bachmann has been a caricature in the minds of some Americans who have followed her exploits as the founder of U.S. House tea party caucus and a go-to right wing pundit on Fox News.

But in a development that just weeks ago seemed improbable, the three-term Minnesota congresswoman inserted herself firmly in the Republican presidential sweepstakes with a polished and confident debate performance largely wrung of the overblown, and frequently false, rhetoric that has made her a cable news favorite.

She also used her moment on the national stage, which she shared with six other candidates, to announce that she had formally filed her papers to run for president. The announcement comes less than eight months before the first GOP presidential nomination contest will be held in Iowa, the state of her birth.

The savvy political move, which came just 11 minutes into Monday night's nationally televised event, guaranteed that her name would dominate early stories flooding the Internet about the debate. The event also featured former Massachusetts Gov. Mitt Romney, who, according to polls is an early frontruner, and Bachmann's fellow Minnesotan, former Gov. Tim Pawlenty.

The disciplined 55-year-old congresswoman managed to use the scattershot nature of the CNN-sponsored event to personalize her conservative stance on cultural issues, while repeatedly placing herself in a position of action: introducing bills, participating in "closed-door meetings" about pressing issues of the day, and fighting "against my own party" on stimulus spending.

With Romney and Pawlenty treating each other with kid gloves - "T-Paw" disappointed debate-watchers who expected him to double down on criticism of health care legislation signed into Massachusetts state law by the then-Gov. Romney - Bachmann emerged as a significant story line.

Which often seems the case, whether her Republican detractors, critical of her often incendiary sound-bite style and lack of legislative accomplishments, like it or not.

The two-hour event, more a hyperspeed question-and-answer session than anything resembling a debate, was dominated by criticism of President Obama - on jobs, on the economy, on the health care overhaul legislation passed last year. Government writ large was also a frequent whipping post, with one exception. Candidate and former pizza chain head Herman Cain allowed that the government should remain in the business of food safety inspections.

Bachmann got in her licks, declaring that Obama will be a "one-term president," and criticizing him vigorously over U.S involvement in Libya.

But, more importantly, she began to define herself more fully to the public, including her history as a former tax litigation attorney, birth mother of five, foster parent to 23.

She repeatedly referred to her activities on Capitol Hill. She's filed bills to repeal financial overhaul legislation and to repeal Obama's health care overhaul. She serves on the House intelligence committee.

Bachmann reiterated her well-established social conservative positions, including her opposition to legalized abortion and desire to reinstate a ban on gay Americans in the military.She characterized her opposition to same-sex marriage as born of her belief that raising children is best accomplished by a "mom and dad,"even though she said she was raised by a single mother after her parents divorced.

Just being on the same stage with Romney, an unsuccessful candidate for the party's 2008 presidential nomination, and starting an answer with "as president of the United States" raised Bachmann's national profile.

But she didn't have a good answer for New Hampshire Republican Terry Pfaff, an audience member who described himself as a mainstream party member.

How will you bring balance, he asked,and not tear the party into factions?

It was then that Bachmann, with a big smile, seemed not to be able to help herself from serving up a whopper.

She assured Pfaff that the media is to be blamed for mischaracterizing the tea party. After all, she asserted, a big part of the tea party is "disaffected Democrats."

Bachmann is expected to formally announce her run back where she was born, and where she has the best shot at building something from her performance in New Hampshire.