Accessibility links
Debt-Ceiling Trash Talk Continues Apace : It's All Politics Talks to raise the federal debt-limit have apparently made little progress since President Obama stepped in Monday to meet with Senate leaders.But in Washington, these types of high-stakes negotiations tend to go to the 11th hour and it appears these talks will be little different. 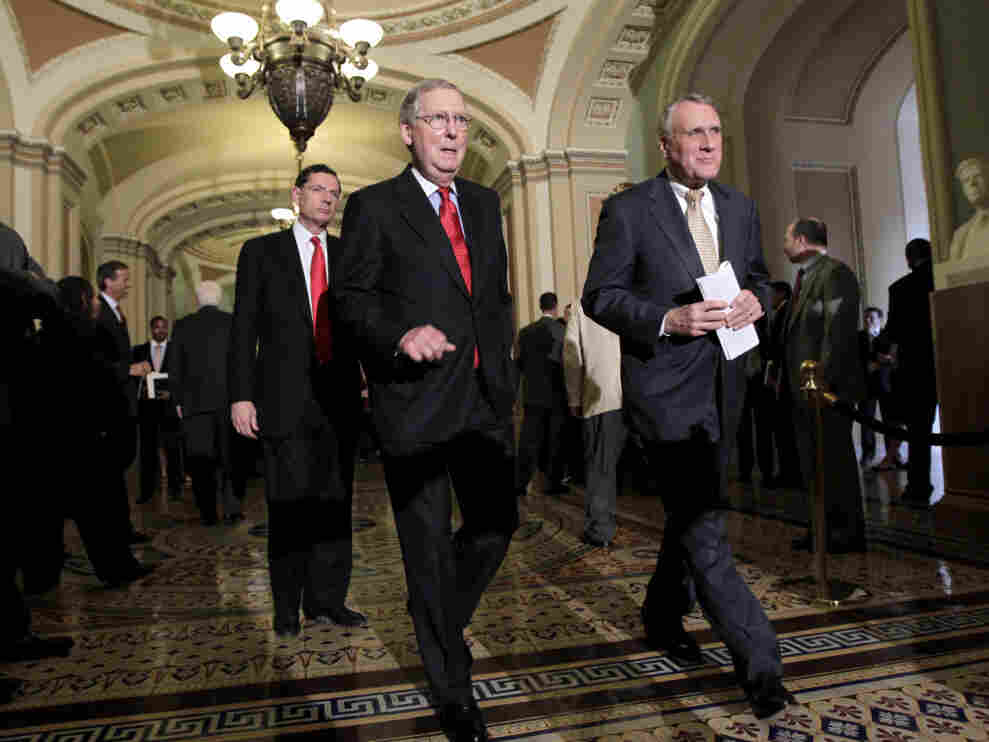 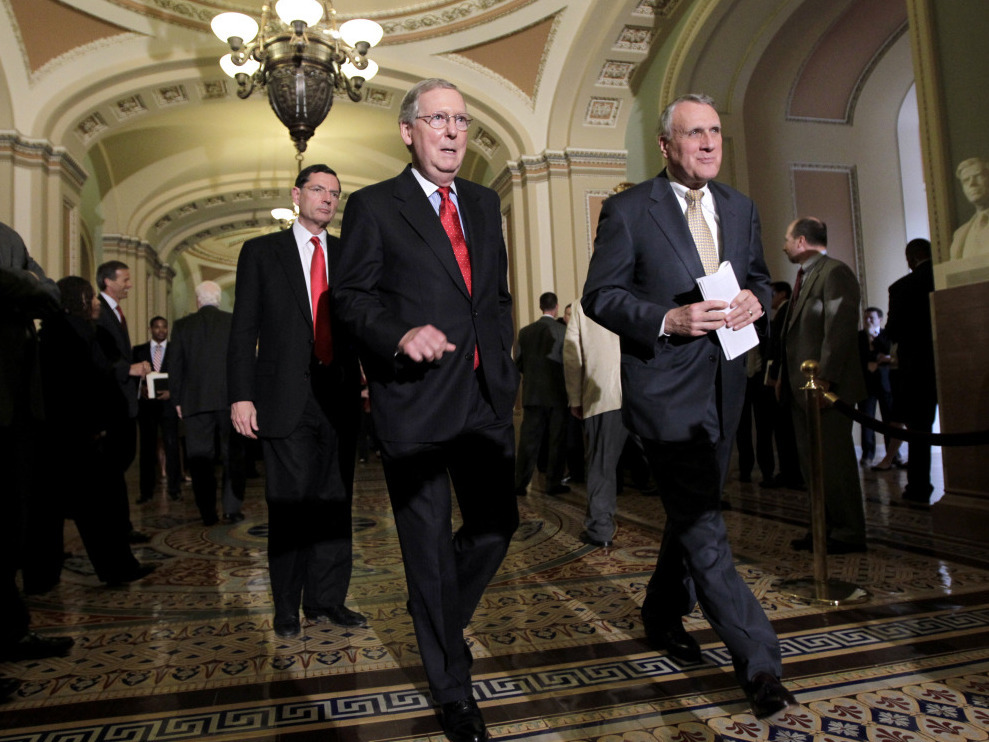 Talks to raise the federal debt-limit made little apparent progress since President Obama stepped in Monday to meet with Senate leaders.

But in Washington, these types of high-stakes negotiations tend to go to the 11th hour and it appears this debt-ceiling crisis is following the pattern.

NPR's David Welna reported for All Things Considered that while a White House official offered a hopeful message Tuesday, Republican and Democratic senators baited each other, diligently staying on their dour talking points (what else is new?)

DAVID: After the only Republicans involved in negotiating a deficit reduction deal walked out on talks last week, President Obama stepped in. He summoned the Senate's Democratic and Republican leaders to the White House for separate talks yesterday, and today White House spokesman Jay Carney assured reporters traveling on Air Force One that all was going well:

Carney: "We believe there is the opportunity here for a substantial compromise on a significant deficit-reduction agreement that is done in a way that is balanced, allows the economy to continue to grow and create jobs even as we get our fiscal house in order."

DAVID: But a decidedly less upbeat assessment came today from one of the two senators who met with the president, Republican leader Mitch McConnell:

MCCONNELL: "The path forward, as several of my colleagues have indicated, seems to be blocked by an insistence on raising taxes in the middle of an economic slowdown."

DAVID: McConnell pointed out that some Democrats argued last December that ending the Bush tax cuts then could hurt the economy:

MCCONNELL: "Most of us believe the economy's not in any better shape now than it was in December. And so far they're saying that it's essential. Uh, we think it's a job-killing step that shouldn't be taken and Republicans are not interested in going in that direction."

SCHUMER: "The person standing in the way right now is Sen. McConnell. You haven't heard such strident language from the other leaders. When he says take everything we want and nothing you want, we will not get an agreement."

As David reminds us, we're just five weeks away from the Aug. 2 deadline, the date by which Treasury Secretary Tim Geithner said the U.S. will exhaust its $14.3 trillion debt authority.

Vice President Biden and congressional negotiators had set a July 2 deadline for an agreement before House Republicans walked away from the talks last week.

Of course, the smart money says there will be an agreement, though it may not happen until guts are thoroughly wrenched and armpits are totally drenched.

One of the more interesting exercises in Washington and financial centers like New York right now is trying to figure out how the endgame will play out.

Writing for National Journal, Marc Ambinder suggests it's in Obama's interest to let the drama go until it gets closer to Geithner's drop-dead date. Of Obama, he writes:

... And he's betting that Republicans, having learned that his team is on nimble feet when it plays close to the edge of the cliff, will concede more up front than they did in December, when only the threat of a government shutdown (darn it, the Smithsonian would be closed!) loomed as the existential sword of Damocles. The longer Obama waits, the more Republicans will privately panic, knowing that their leverage decreases steadily as the weeks go by — and exponentially at the turn of August.

In a piece in the National Review Online, Douglas Holtz-Eakin, an economist who once headed the Congressional Budget Office, doesn't buy that logic:

It has been baffling to await this moment, because the president needs a deal. He can neither afford a serious market disruption and economic crisis — that would be the death knell of his presidency — nor continual reminders between now and November 2012 of his fiscal fecklessness. He needs a real deal, fast, that pushes the next debt-limit debate past the election...

... Some have speculated that instead the president will play chicken, remain missing-in-action, and use a late-August crisis to push through a clean increase in the debt limit. That logic hinges on believing that the Congress will panic and simply pass a debt limit increase. That is unlikely...

Jonathan Chait over at the liberal The New Republic posits that some House Democrats may actually be pushing for a default because it could put them in a better position to reclaim the House.

Think through what happens if the government defaults on its debt. You have an economic crisis. People get mad at House Republicans, which helps Obama, but the economy also teeters, which ultimately hurts Obama but does not hurt House Democrats very much. Indeed, a default crisis would seem to increase the chances of the 2012 elections producing a Republican president and a Democratic House. I suspect (House Minority Leader) Pelosi knows that.

Given the damage to the economy many experts are warning of, it's hard to believe House Democrats, who after all have credit cards and mortgages too, would be hoping for a default in order to reclaim the House majority.